The Vogue/CFDA Fashion Fund awards were held the other night . This event has gone over my head in the past few years. This is it's 6th year and I feel that they're starting to 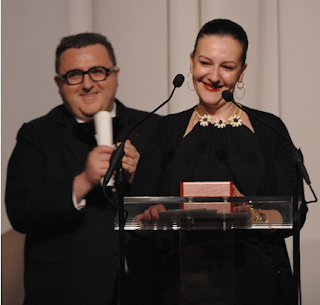 get it right. The face of it is not necessarily the body of it. The criteria for what makes the candidates and eventual winner are mysterious. On the one hand, it's a huge honor and coup to be considered and go on to win. $200k and a year's mentoring are two incredibly valuable prizes to receive. They're invaluable especially in these times where the challenges and pitfalls for success are as plentiful as the opportunities. Past winners were Alexander Wang and the year before, Rodarte. These winners felt to me as being extremely insider-ish and not particularly relevant. It seems that they, like many CFDA winners were not so much people's choice winners but choices who appealed directly to the bodies who bestow the awards. Nevertheless, they've been catapulted into the sight lines of the public. Do they have greater relevance as a result? I'm not sure. Alexander Wang has certainly gone on to scale higher heights. Rodarte has also benefited greatly. The zeitgeist is synonymous with Wang's ascension. It's a tea leaf prophecy...

This winner this year is Sophie Theallet, an expatriate French designer. The other nominees which ranged from designers of womenswear, mens, shoes and jewellry were a very interesting group: George Esquivel, Waris Ahluwalia, Phillip Crangi, Monique Pean, Patrick Ervell, Simon Spurr, Wayne Lee, Gary Graham, and Flora Gill and Alexa Adams of Ohne Titel. When looking at all of their collections there was a strength and uniqueness that was more obvious than in the past. There was also a sense that these were consistently marketable designers which speaks volumes. After all, wearable, retail able clothes are criteria I find as important as BUZZ. There were a number of stages and elimination rounds that culled the larger group of designers down to the finalists.

Sophie designs wearable clothes, even beautiful in some cases. She is a mature designer with grown up taste. It's a breath of fresh air that she does not fall into the category I call the "Fetus-ization" of fashion designers. Lately, one needs to be not older than 25 to be considered a wunderkind, no matter if you can design or only master the art of the photo-op. Some would view that as a minus, I don't. These aren't tired,old lady offerings but elegant, sexy and deceptively simple. She feels like someone who will benefit from the financial and mentoring bump that this award bestows. My personal choice would be Ohne Titel for their real muscle, courageous individuality and aesthetic which is all their own. They are for me what Rodarte should have been. One pair are realists and the others are fantasists..... Ohne Titel will prevail in the long run, of that I have little doubt.

The only tiny, niggling gnat surrounding this choice is that she is a huge favorite of First Lady Michelle Obama, unlike any other designers on the list. I can't help but wonder what sort of influence that may or may not have had on the judging. When you consider Vogue/Anna Wintour and her new best girlfriend Desiree Rogers, the aesthetic alter ego of Mrs. Obama, I can't help but puzzle over the discussions they may have had regarding Sophie. This is not meant to take anything away from Sophie Theallet as being wholly and totally deserving..... but the question floats in the air. Politics is everything in this business and in the world. It's not who you know, as much as, who you dress.
Posted by Fluff Chance at 5:10 PM

I don't think being a favorite of Mrs. Obama was the deciding factor, it might help, but I seriously doubt that was her reason for winning. Sophie's clothes look comfortable and they are definitely something that I would wear. She better make sure that she delivers next fashion season.

A-HA! so there was something in the air regarding the winner.

Congrats to Sophie Theallet. I was not a fan of her Fall 2009 collection. Despite the clothing being wearable and in many cases dresses without era that can hang in a closet and be worn anytime (I am a fan of this) the use of Native themes bugged me but then it is my political side with the issue...

Gotta disagree here w/ ya Fluffy. Sohpie is one of the best new designers to come along in many years, IMHO and she's not the usual avant garde-cutsey stuff the CFDA usually rewards. I find this a breath of fresh air. How many Proenza Schulyers can we stand? Mrs. O's patronage couldn't have HURT, but I don't think it was THE factor.

Hey Fluffy...I've been a good girl these days faithfully looking at the collections I missed. Rodarte BLOWS....I can't believe I was the one who pimped them so hard at OtR when Cathy and everybpdy else was like "Umm...yeah, right". Ahh well, you win some and you lose some, right? ;)

i really like her. i'm glad too it's not some teeny bopper. i'm glad she one. it looks like she really worked for it.

You need to review the use of "it's" vs. "its". It's taking away from its clever insights.