Marco Zanini is the perfect example of what makes me love fashion and the mysteries of its power to transform. In the best of all worlds, fashion is a vehicle that takes you in, sets you up for a new way of experiencing yourself, the world around you and everyone you come in contact with, and is nothing short of a magic carpet ride. This can happen with something as small as a new tie, a different eyeliner o

r lip color or something as grand as a completely new look from head to toe. I've seen it hundreds, maybe thousands of times. I've experienced it, personally, as a kid and as an adult. Case in point: my first Speedo at 16 in lemon yellow (Ogunquit Beach was forever changed) and Ladies who, as my clients, came

to the showroom or a trunk show looking and acting one way (dead, dour and

depressed) and left with a completely different mien: beautiful, alive and confident. That's not exaggerating and it's certainly not limited to those who I dressed but the many who experiment and experience the multi-layers that make up the worlds of fashion.

Marco, who too briefly was at the helm of the Weinstein's epic disaster film,"

Halston: The Exhumation", was given too small a cameo appearance ruined with over direction. Like many of the Weinstein's projects of late, it took on water and swiftly drowned, again. They should have let him

do what he does best (you'll shortly see) and leave the archive and old patterns of the original to the museums and reference libraries. It was a deadening display that bruised Zanini's reputation, briefly, and showed t

he Halston Corporation to be a soulless, rootless , brandless shell that to this day, it remains.

So what a fantastic treat to see what he's done for that venerable old Parisian couture house, Rochas. The collection which felt more seasonless an timely than most on the calendar

was smart, directional, unforced and seriously great. It opened with luxe sportswear that was a mix of disparate pieces all coalescing 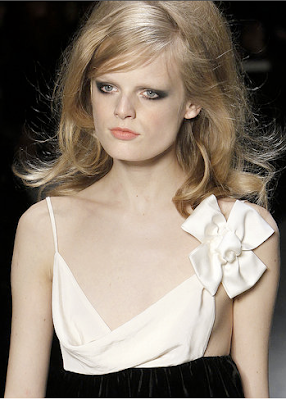 into a very neat whole. If styling played a background role, it didn't show it's contrived head. The impression was one of decisions made and not

solutions sought. The look was what Halston could have been. Had it been allowed, the press and editors would most likely have cooed with satisfaction. Clean, modern deceptively simple pieces to be bought/worn separately or worn straight off the runway. Double-faced cashmere coats and jackets over tops or sleek trousers. This was Halston vocabulary for the 21st Century. There was a swinging 60's vibe, but not in the vintage vein, but current. The mood and insouciance of then but translated for now. A sense of coy sexiness and fun was injected into most every piece.

tousled hair along with subtle makeup was the canvas for these seductively youthful clothes. The shoes made of muted pastel silk velvet, many with square toes and low heals or leopard go-go inspired boots gave everything a cool, chick, unstudied feel. But the dresses, tunics over slim pants with controlled flounces along the hems of both and soigne cocktail looks , whether as 2 piece cocktails with pants or as dresses were youth quakes that sent tremors under the audience's seats. Beautiful, rich brocaded silks in sorbet colors and a touch of black silk velvet in the comeliest little dress a 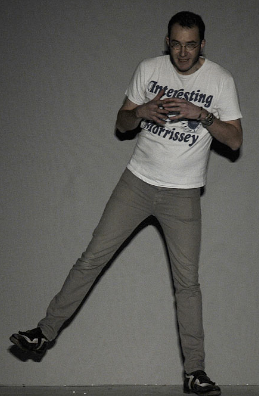 nd "smoking" were real high points. The bottom line is that the whole collection sat on a summit. None of it was in any way showed a lapse of imagination, craft, and never veered off topic. There was a musical quality to the presentation as if it were composed as a concerto: an overture which introduces the theme, a sprightly allegro and andante all culminating in a rollicking, romantic vivace.

Not much was written on this collection.

Lagerfeld's Chanel was a tour de force, too much is made of Louis Vuitton and YSL and Givenchy for that matter. For my money, the news is with Zanini, Elbaz, Alaia and N. Ghesqierre. Notice the mix and its diversity. That is where the future lies; in the past, present and future present.
Posted by Fluff Chance at 11:27 AM

i want to see the speedo!

Well said! I could not agree with you more in your assessment of Marco Zanini's talent. What happened to him at Halston said so much more about Halston and its management than it did about Zanini.

I also agree that his latest offerings at Rochas did not get the attention they deserved. I personally find his use of color and texture incredibly appealing and his mastery of proportions keeps his historical references fresh rather than cartoonish. I think he should be getting more attention than he is (although I suspect this may be a blessing for now).

So glad I'm not alone in thinking this way.

gorgeous colors and just a soupcon of black...nice fabrics and design for almost anyone to wear.these are the clothes women should wear.
One can imagine the thrill of having chosen a perfect piece from one of your own collections...knowing how wonderful they would look.
My first "speedo" in navy and white stripe at the tender age of 12 on the beach of san remo, italy...shy american avec famille en vancances.