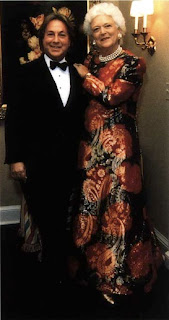 After 55 years in the business dressing some of the world's most bold-faced names, Arnold Scaasi has sort of decided to close up shop. "Shop" has been a custom business for the last 15 years or so. I say custom, because it really doesn't qualify as Couture, in my humble opinion. He made lots of flashy dresses and gowns in his career but always with a certain "Arriviste" quality to them. His ladies always looked like over dressed guests, never chic Hostesses. That's the name of the game in that rarefied world of the high end. There's the Guest dress and the Hostess. The hierarchy of the coded dress in the land of "Affairs" is a treacherous obstacle course. The Hostess has to be the obvious Queen. She wears the height of fabulous, artistically IMPORTANT clothes that say, "I am wearing the best; therefore I am.....the best". The guest on the other hand wears ( too often) something inexpensive and totally forgettable, or something so vulgar, garish and scene maki 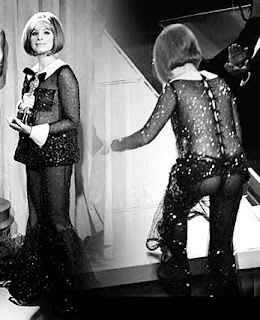 ng/scene
stealing that the Hostess is offended and everyone else wants to keep their distance. Scaasi was a master of the obvious and garish. He was damn good at it too. That's the beauty of the fashion business. There's enough room and demand for all sorts of talent. It's extremely democratic that way. What he did for Barbra Streisand for the Oscars in the 60's was as inspired as the trite, matronly stock he did for Barbara Bush in his golden years. He swung both ways; a man for all tastes.
I remember going for a job interview at his Central Park South Aerie back in the late 80's. His place was all Lalanne Sheep chairs (the same that Marc Jacobs has in his Paris pad) and busy art all over the place. As I can't really remember what it was, it probably wasn't that memorable...probably lots of Dali lithographs and too much Chagall. I bet there was some Leroy Neiman hanging there. Anyway, his uniformed African-American housekeeper let me in and had me sit in th 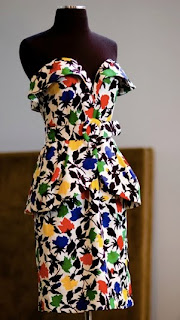 e foyer for him to appear. He did after about 20-30 minutes and was a whirlwind of energy and attitude for being 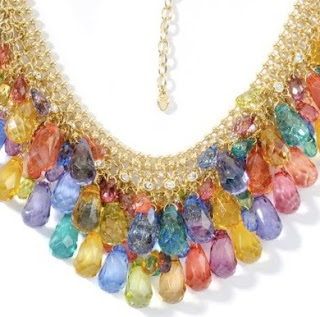 so small. He was looking for someone to pump out schmaltz which wasn't my thing. I wanted to be a "Createur" and schmaltz didn't feel "authentic". He was nice, not rude, just short, I mean curt this time. I'd later run into him at Costume Institute Balls, parties , openings and at restaurants. He always had an arched eyebrow; 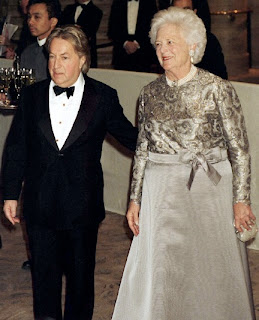 very Joan Crawford. I even drove behind this annoyingly slow car on the L.I.E. coming back to the city one Sunday night. When I flashed my brights for the car to crawl out of the fast lane I saw the license plate which said "SCAASI". When I pulled up alongside him, sure enough it was the master, barely able to look over the steering wheel, but with a hyper arched eyebrow pointed at me for my rudeness. I thought his comments on Michelle Obama's style as being"amiss" was rich coming from someone who never made a First Lady look anything but tired and dated.
Nevertheless, I'll miss him. He will continue his costume jewelry collection for the Home Shopping Network so we'll see his lack of charm or personality on the flat screen at odd and inconvenient hours. He was an important part of the constellation which made up a galaxy of disparate designers. There's one less iconoclast to keep the salad mixed. It's fast becoming Boston lettuce with the dressing on the side.
Posted by Fluff Chance at 2:55 PM

Fluff...perhaps more like a coleslaw of bad taste with no experience or training.
Arnold is known for the overdone gowns and not one for simplicity.Think of all that beadwork!At least he had some fun in Paris...one of our favorite haunts.
Where are the talented designers with originality and flawless taste?