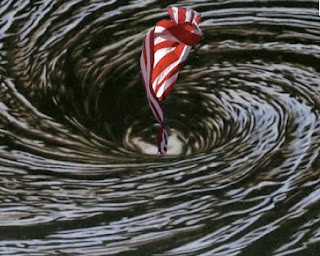 I love that title. My friend Ted who's back in town to sell his luxe pad in the Village coined it when we were sitting having coffee while staging his apartment for its open house tomorrow. We were both talking about the strange twists that life has taken since we made the journey here back in the early 80's. So much of what NYC was is a thing of the past. Not to be overly nostalgic or maudlin but things are different now. When we landed on this planet we were steeped in big dreams of making our marks on this town in the world of fashion. I'd have to say we succeeded admirably despite having been bumped off the broncing pony for one reason or another. Actually, to be truthful we gracefully "dismounted" and stepped aside. Still, we both have found ourselves wondering what happened and why. Life's intrusion and the resulting stock taking puts things in an even more stark relief. Though many of the players are still the same the game is almost unrecognizable. What passes for value or talent bears little resemblance to the days when we took to the Avenue. Reading things in the past few days about the merry-go-round of designers and design houses is like a tune with all flats. That isn't to say that the lucky ones who get the brass ring are any less fortunate just that I don't see the relationship between marginal visions and venerable houses with colossal influence. Honestly, I can't help but view it all as a travesty and the people in control as charlatans of the highest order. Robert Verdi asked me when I saw him at MBFW if I was,"chasing the dream or living the nightmare"? After I stopped laughing a few days later I had to ask myself that question and try to answer honestly. With my father's death and the bucket of cold water it's thrown on me I'd have to say I was chasing the nightmare. Doggedly fighting the power is a lonely, boring road and I'm getting tired of it. The only problem is that this is a world (fashion) that I love and one that I'm best suited for. Watching the documentary on Bill Cunningham today reminded me of why I've spent the last 30 years doing, living and loving this business. He says that if a man searches for beauty, he finds it and I suppose that's what I do. I don't mean to appear hopelessly caustic but I also refuse to lie to myself or others. Culture and fashion do seem to be circling the drain but they're not down it yet and we can only hope for the best. LVMH may be desperately confused or brilliant visionaries, Daphne Guinness may be a pathetic narcissist or just a woman on a mission, and Chloe Malle could be the next Cathy Horyn or just another hack whose parents pedigree has little bearing on her own and texts while ignoring the subject of her next story. The list goes on. Personally, I'm hungry for some beauty and an interesting new piece of information. I'm back on the scent and will keep you all posted. Oh, I watched "All on the line" this past week just to play fair. I stand by my first analysis: utter bullshit.
Posted by Fluff Chance at 7:12 PM

When Lady Gaga and the others you mentioned are our "fashion icons", I say "boo to fashion".

Bring back Style, Elegance, Polish. In clothing. In life.

Fluff, this "chasing the dream or living the nightmare" has me very scared right now. I have been going through a very rough patch lately searching for direction and answers and I simply can not seem to find neither one. I have a very strange fear, I can almost taste it - a fear of not being able to reach my dream...I feel like there is no life after it.I should only hope to have as much wisdom as you have. I do not mean to complain at all. I love what I do and I hope one day to be one of the best.I wonder if you ever read "Of Human Bondage" by W.Somerset Maugham. I often think of it as it describes perfectly the struggle of Philip Carey, who was born with club foot. Philip took his little inheritance (all he had) and invested it in his dream of becoming and artist. At the end he lost everything and payed dearly for pursuing his dream.One time he had asked his teacher to stop by his flat to look at his paintings. The teacher came by and told Philip that it would be best if Philip would stop immediately because he would never be one of the best. He simply did not have enough talent. I often wish I could have somebody like this, like that teacher...
Fluff, I am wishing you beautiful Easter. I do not know if you celebrating it at all, but just in case - Happy Easter!:-)

I can see you publishing a great book, a scent and a book would be great !

Haha! Whilst Arnault may be devil spawn, it is us who have allowed for this industry to be destroyed. Take all of the "glamour", the riches, the excesses, and the absolute destruction of a craft for monetary gain - mix it up and there you are, LVMH common stock.

There is only one question that needs answering right now, how many Milliners were put out of business by the French revolution? Let that sink in, and you've found the future of the Dumas, Arnault, and Pinault families.

Fluff,I have problem with the comment left by Spirou: "Luxury means NOTHING right now, it is just another word for them to sell handbags to Russian whores." While I agree with the first part of the statement, I am furious over the last. I am Russian. Does it mean I am whore?

Dear Couture Milliner,
I would hope that Spirou does not mean that and thathe was only lost in the excitement of the moment. I tried to edit that part of his comment but couldn't. I apologize for the tone of that comment. It is offensive and I will remove it.
Eric Gaskins/Fluff Chance

To: Couture Millinery Atelier about Fears

The Dream of the glamourous Valentino life may not be so apparent for most anymore, but one better Reality is here and now...

For those who persue their Dream, polish their Craft and serve their Clients, from no matter how humble a studio... nothing can be better than when the phone rings, " We need an appt,... Mrs. So&so is needing...".

They chose you! over all the NY, London, Paris guys...
That speaks volumes...
If you fulfill their needs, consider this one small part of your purpose fulfilled...
In these times, save your Glamour dreams to send out with your Clients! Work through the Tom Tom club, word of mouth, woman to woman...
Chances are, You'll hear about it!

Paint to Brush to Canvas, Thread to Needle to Cloth
It's all in the process!
When do artists retire?
Vive la Reve! Vive votre Vie!

April 14 was Grace Coddington 70 th Birthday.
Good picture retrospective on the April 18 blog of
www.blogs.lexpress.fr/cafe-mode
Class act all the way.

Ah Fluff. We're in a sad state. Nothing seems to be of any real value anymore and that includes talent. Honor. True style. What can we do? Just keep on rolling 'til the end.

Fluff,
Hang in there and as usual, your writing is inspiring.
Life is like the tides, it goes in and out. Or like a roller coaster, up and down. You just never know. I am sure things will be on the upside soon, just take care of yourself and keep things in perspective. Sorry about your father. It takes time.

Sincerely,
Out here in Indiana

after almost 15 years in the fashion industry, I am bored to tears. I was lucky enough to start in the late 90's when it seemed lighter, fun and more glamorous. after september 11 it all changed. soon it will be 10 years and it is finally time to move on. it has become even more like a nightmarish travelling circus, with more and more performances and weirder and weirder characters.
I am lucky enough to be still young enough to pursue another career, may it be medicine, to do interior design, to have children and get married, whatever.
fashion has become so utterly mainstream, it is almost redundant. visiting europe and meeting new people who have no idea about fashion has been so refreshing and liberating. nobody gives a damn what handbag, dress or shoes you wear. they recognize style, posture, comportment and innate class. it is nice to be soft and real again, to sit a crappy cafe and not be ogled up and down.
all that stress is not worth it.
of course, luxury will always be around, but it will be a small garden where you grow your own vegetables, clean water, lovely sheets, a good pair of shoes from a local shoemaker that last several seasons, to have someone that loves you. things that money can't buy.
a backlash for the fashion industry will come, it will be exciting and liberating. I suggest everybody take their money and sanity and run.
fluff, thank you for your honesty.
to survive fashion is quite something. we are the lucky ones.
write a book. you oew it to yourself, you owe it to all of us.
xxx from germany.

Well ? You wanted good news ?
We had a beautiful wedding in London and a mass murderer was taken down. Have a great week Fluff.