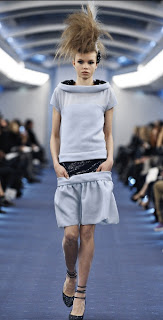 The couture this season for the most part was a non-event. Chanel which usually sends me into paroxysms of awe and delight, didn't. The set was awesome and delight producing, though. Who doesn't get gooey in a first class cabin of a jumbo-sized ultra prive jet? I'm not too big to admit that I do. Even Business class on Qatar Airways sent me to the moon and I was only s

upposed to go as far as Doha. Still, the cabin is one thing, but the service and in-flight entertainment is something altogether else. Unfortunately, Chanel Aire basically served nuts and flat champagne and charged an arm and two legs for the privilege.

Captain Karl announced over the loudspeaker that there would be no 50's, 60's 70's or any other era as reference points. He implied that that was not on the flight pattern and the plane was headed to parts unknown, which is esperanto for: the future. Well, if the plane had taxied out onto the runway we might have gone somewhere new or not so new. As it seemed to me we were caught in a windshear of Lagerfeld's own sentimentality, which is an oxymoron when you realize his ab

solute allergy towards nostalgia of any sort. The clothes looked steeped in his personal style ticks that have excited audiences and clients for the past 30 years or more. With the groan of engine troubles after the first 10-30 looks the over heated plane was towed back to the gate. In the end the flight was essentially cancelled and the only view I remember was a long look at his past.

I'm sure they'll tinker with the engines and get it up and running next time but what a whole lot of chatter for a voyage to nowhere.
Posted by Fluff Chance at 9:32 PM