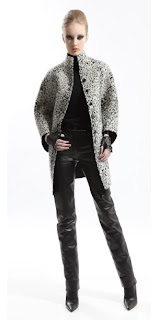 William Ackerman is one of those virtuoso Guitarists who creates music that is at once complex and almost heavy with a back story of experience, artistic experimentation and triumphs. Listening to his melodies can be almost an ecstatic experience. The strings, chords, the incidental harmonics all woven with voices like a choir chanting and repeating phrases transports you. In a matter of moments or in the length of a song you're taken away. It's all so personal that no two people go to the same place because that place is most likely your past or a dream of somewhere else. The beauty is in the fact that he provides the vehicle and many portals for you to choose. And what does this have to do with fashion, a season or Ralph Rucci? Depending on you, nothing or everything.

Ralph Rucci's Fall collection has a very similar effect. The work has a very clear and distinct voice of its own. Looking at it on a rack, not even on the runway, though a model was showing looks for a photographer as I walked through, spoke clearly with little need for music accompaniment, lights, an audience of preening somnambulists

or explanation. From the first, I was aware of their unique history. It's a bit like walking into a barn and going up to a horse that's just won the World Cup, silenced a stadium as it performed a flawless test at the Olympics and now he's standing there letting you pat his warm elegant head and run your fingers through his mane. The collection's impressive pedigree by any one's standards makes you stop and think. Rucci's almost legendary status as a master couturier, able to manipulate the most precious fabrics, creating embellishment, textures, re-imagining the nature of furs as garments, creating volumes and re-form

ing things as utilitarian as a sleeve, in essence re-inventing the shape and language of clothing and changing the face of what many of us see as contemporary fashion is something larger than dressmaking. The effect of past ready to wear collections and the couture (hell, it's all couture) he showed in Paris a few years back all have the overwhelming quality of being aesthetically and conceptually beyond the scope of even the very richest of women. Money doesn't make one fabulous, it just gives you a financial edge. Style has a different sort of price point. In the past one needed to step up to the p

late to wear these clothes without looking like you were trying. My definition of trying too hard: think Daphne Guinness in just about everything she owns, and you get my drift.

With this collection, Ralph has done something unexpected. Without a conscious effort he has presented a collection of supreme simplicity. He moves from A to Z without so much as a blink of his eye. The volumes are there, the language that he created and whose nuances he's expanded on and added to is all there but now it stands before you as an invitation. Instead of commanding, "look at me" it whispers,"come with me". That's a huge difference. Decoration is less intense, less fraught with a brilliance that was at times over bearing. A sable cardigan is knitted and is as plush inside as out. He found a way to make sable "double-faced" with none of the structure or weight of a fur coat. The sweater has become a fur, stealing the thunder of cashmere and almost apologetically so. He prints on double face cashmere what appears to be the image of ruined fabric like artifacts found from some lost civilization. There's more than a shred of irony in his choice. Fisher, a poor man's sable is used beautifully to create a tiny jacket of ribs held together with strips of leather braiding. That elimination of structure also applies to his "Infanta" gowns near the collection's end. In the past, these dresses which were the showstoppers were wonders of construction w

ith layer upon layer of precious detail, sweeping trains, wildly intricate and as dramatic as a complete opera in one dress. This time, it w

as like the first few bars of an overture, a magnificent melody laying out a theme, suggesting a story of love, loss and redemption but with only two layers: a column of copper patinated sequins with a gazar scrim of a different shape layered over top. On that scrim was a large Orientalist image that changed the hue and texture of the sequins below like a story told from different voices. And yet, it was as light as a feather requiring a single pair of hands to put on and take off.

Beautiful treatments of alpaca lined in Mongolian lamb, black heavy gaged knit dresses with a single front zip and artful rib placement were the ultimate day to night dresses. Double faced cashmere suits with trousers in wool, cashmere or leathers were smart without being clever. The high luxe pieces were there for those whose lifestyles demand the grand gesture, but there were many more styles that quietly spoke volumes. Th 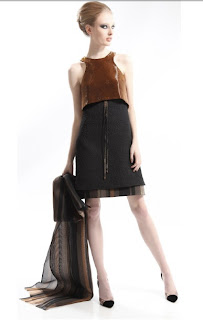 ere is an annoying misconception out on the street where people think that these clothes are for a "mature" customer. That means old lady clothes. Sure, there are some very visible older women out there making their presence known conspicuously dressed in Chado. That is more occupational hazard than a statement of the limitations of the clothes. They(the clothes) also cost a fair amount of money making them accessible to women of means, most of whom tend to skew older. The fact is that they are not old

clothes and they look fantastic on a woman in her 20's to 40's and equally great on a woman in her 60's and above. By pigeon holing them as old is unfair and short sighted. The press who consistently short sheets Rucci on the beauty and breadth of his offerings does little to change the minds of the public. Perhaps his resistance to play jester to the court of the press doesn't help his cause. When the New York Times gives him 3 or 4 sentences of a review and the other Ralph 3 whole columns, there is something off balance. Anna Wintour's complete lack of attention and unwillingness to editorialize any of the collection is just beyond the pale. It's not so much conspiracy theory as it is conspiracy fact. Jason Wu or Chad 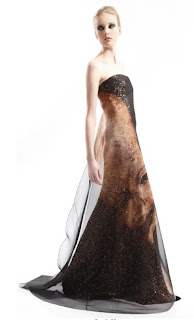 o? You choose. All the press about musical chairs at the big houses in Paris. Its a lot of talk to take the focus away from what is.

Fortunately, there is much more to life and success in fashion than a page in Vogue or a pat on the head by the cloven hooves of its principals. Making the client happy, making women look and feel better than they did before you touched their lives and the journey from one's imagination to a place on the world stage can be reward enough. Take a long look at this collection and see if the music in it does more than make you tap your foot. It's a melody I can't get out of my head. As stars fall so does the night sky become illuminated. Just look up and see.
Posted by Fluff Chance at 2:28 PM

Two interesting articles from Cathy Horn in the times,
" Why Raf Simons was dismissed " and " Rey Kawakubo"
Your billet made my Sunday as usual, I plugged the Mac in the LD and let the magic happen ! I watch, only when YOU demand it ! And yes you are absolutely right, it is a great collection, it reminded me of better days in Paris, in another world and it made me happy.
Spirou

It is increasingly clear that "good press" is utterly bought and paid for. For a rather small design studio such as Chado there is most likely not an ability to participate in this farcical dance, nor the interest. And so, he pays in another way. But, time will tell. This is a small studio and small business which has made American fashion history. Not even a legion of Anna Wintours along with all the members of her court can ever and will ever change that fact.

What a pleasure to read your review of Ralph Rucci's colletion. The man is a National Treasure and his work lifts the entire species up a rung on the evolutionary ladder.
Loved your comment about DG; did you see her 'appearance' on the Charlie Rose show recently? Oh dear.

Thank you for your commentary on Chado Ralph Rucci. When I see his clothing I just swoon! The rest of American Fashion is in the Factory run by Suits not Artists. Rare is this bird that can soar so high, so few can see...

Could still happily wear some of these pieces, mourning my no longer being able to wear the bare ones, but.....

(When I see the kitsch on the various Red Carpets, I wonder why some "star" hasn't found this designer? Maybe he'd rather they'd not?"

Forgive the second post - I'm back with a postscript.

On your comment about the notion that Rucci's designs are not for the young, most of them are clueless (well, look at them!) and so these beautiful things are labelled "old". They're either into throwaway dressing or they are blindly following some of the so-called "fashion icons" extant in the land, who dress like circus clowns.

Anna Wintour has copped out. She is not doing what Vogue did in the past - leading her readers toward elegant style. Rather she and that monstrous man who guides her are pandering to the most common (a real epithet in our family) tastes.

Some of us women of a certain age, without benefit of big spending accounts, knew more about elegance at 18 than women twice that age know now. They are lost with no one to guide them.