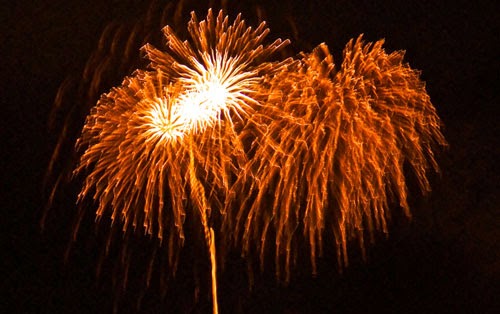 I don't know about you but I was very excited to see the new film on the life of Yves Saint Laurent by Jalil Lespert. Things got in the way of racing to catch the premiere so it wasn't until last night that I finally sat down to watch. Maybe it didn't help that we'd just ridden bikes in the dark to watch the fireworks display over the harbor here in East Hampton. For a mere 15 minutes the sky was alight with displays of pyrotechnic wonders, all of them more astounding than the explosions that preceeded. I kept thinking that it all looked so new, so abstract and "modern". It was almost an intellectual experience beyond simple entertainment. The grown-ups standing at the water's edge all seemed to be thinking and saying the same thing. We were witnessing something new and it was somehow moving in a hard to describe way. 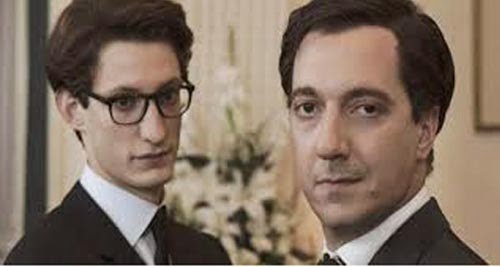 Pedaling home in the dark praying not to flip over onto the concrete by way of some unforseen pothole or worse, being flattened by an oncoming car careening its way to yet another Saturday night benefit, the thought of a yummy dinner and exoticism that was YSL caused me to pick up the pace. Like so much in life, the journey was more interesting than the destination. From the first minutes something felt off. Pierre Niney, the actor playing Saint Laurent with his requisite heavy black framed glasses, enormous eyes and beak-like nose was a dead ringer for Hamish Bowles. Fragile, melancholic, and fay Saint Laurent goes from wunderkind at the controls of Christian Dior to basket case in a psych ward of a Paris hospital over a letter of conscription. The melodrama from here on in was so thick it became a chore just to get from one dress to the next. Little or no explanations were supplied for who characters were and a timeline so pock marked it was impossible to follow unless one knew the story and the players. Lou Lou, Karl, Pierre and Mama were little more than paper dolls. It seems everyone in the circle functioned purely as enablers. That much is probably fact but the film serves up this dish with all the grace of a short order cook stumbling through the kitchens of Le Cote Basque. 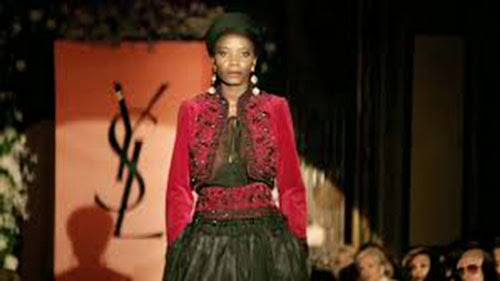 That Pierre Berge sanctioned the film is no surprise as it is more his story, again, than that of the "master". That sanctioning is the only thing that gives a hint of life to this DOA docu-drama. Some actual pieces from seminal periods like the Mondrian dresses, a group of looks from his Russian collection, and sketches give much needed flesh to the otherwise brittle bones of the story. But even they are as lifeless as the narrative. The models and "faces" chosen by the director to recreate YSL's legendary cabine and closest friends, Betty Catroux is one, were incredibly unattractive. The stand-in for his most famous of muse/models, Mounia, was a sad choice. Others were simply grotesque, that would be Betty(Catroux) and Karl(Lagerfeld). 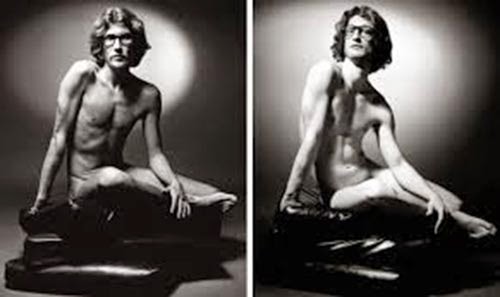 The film's pace and the poaching of scenes from other YSL films, namely L'Amour Fou, added up to less than zero. We basically watch Hamish Bowles complain about how he will die if he can't design and how the world is his enemy. I can think of few designers who had it so incredibly good. The backing of Charles of the Ritz, the brilliance of Berge as business partner and guard dog and the clients who elevated him to the heavens do not add up to a hard luck story. But if you're inhaling cocaine and alcohol like other people do air and water sooner or later things are going to get messy. Watching Hamish, I mean Yves at a sex club with manacles on his wrists and some dark business going on behind his heaving body is somehow too much and not enough information. Better to stick to books like  Alicia Drake's "The Beautiful Fall"  in order to get a clearer picture of the players and how they knew one another and interacted. This film does little more than give you a reason to question why we find these people and this industry, Fashion, so compelling. Perhaps it was the sub-titles that wandered veering maddeningly away from what I assumed was being said. I will need to hear my dear friend Spirou's take as she's the real deal; French and someone steeped in the fashion and players of that period in Paris. Actually, Spirou would have made a much, much better film simply as someone who lived on the frontlines of fashion both in Paris and here. 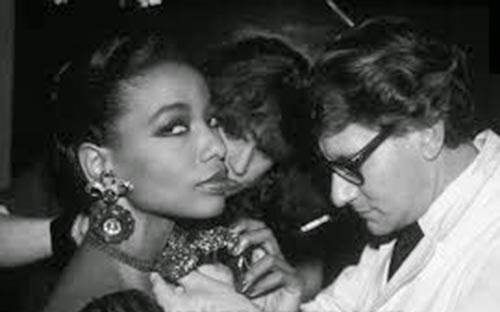 Unfortunately, this film failed to illuminate a period when a single man changed the way women dress. Unlike the fireworks that not only amused but confounded us this film failed to shed even the tiniest sliver of light on a world that's slipping deeper and deeper into darkness.
Posted by Fluff Chance at 10:25 PM