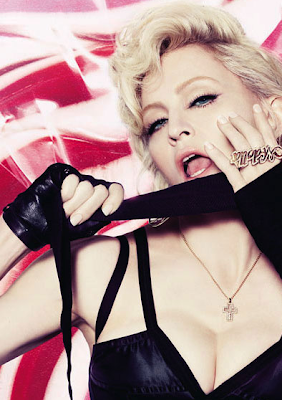 Is the Lincoln Tunnel the portal to the Black Hole? Is Atlantic City the fabled Elephant's Graveyard? Does every straight man's idea of dressing up consist of a "dress shirt" worn untucked with a pair of "dungarees"? Is the one item that every woman in this country, or on the east coast, shelling out for a pair of stiletto heeled suede boots with a buckle on the side of the leg?Am I alone in these observations or am I just being an unkind and overly critical snob?

This weekend found me, or perhaps lost me in AC ( Atlantic City) for a Madonna concert. It seemed like a good idea; a lark which I figured would take my mind off of the fact that this country and the world is going headfirst down the toilet in a counterfeit Kate Spade bag. Yes, that's just how ugly the reality is. I digress, so back to the scene of the crime. I curled up in the back seat of our comfy super sonic SUV for a short cat nap and awoke in Sin City. From the moment we checked into the only "boutique" hotel on the boardwalk( The Chelsea) I started to see repeats of the same look over and over and over again. Obviously, Madonna was the only game in town considering the people massing at the front desk and all over town. I wouldn't say that it was a bridge and tunnel thing(I'm not going to be a bitch ) but there was something decidedly down market about the guests . Whenever I see people checking in at hotels and their clothes are on hangers instead of suitcases, I start to draw certain conclusions. Ok, so I'm a snob, but I thought when one travels, one carries ones clothing and personal items in overnight bags , or suitcases or at worst in an over sized IKEA plastic bag(.59) but NOT on a hanger. There were lots of hangers being bandied about.

Nevertheless, there was an electricity in the air. Everyone was clearly ready to party and have a very good time. Her newly-divorced Highness was in town and the party was clearly getting started! We took in the floor show and immediately started to pick up on the trends. Actually, it was one trend that had taken hold of this gang. Very high , high heeled boots. I'd have to say 8 out of every 10 women were teetering in them. Some were pros at stepping confidently in them , while others were walking with heels seesawing from left to right at 45 degree angles. Each foot was on its own special flight path trying to get their precious cargo to the elevator or the bar; whichever was closer or easiest. The swains in attendance were all pretty nondescript in jackets over jeans and Geoxx shoes. I spotted some cowboy boots , too.

Once we were in our room and taking it easy before the big event, we checked out the movie channel for some entertainment. I thought we should test out the flat screen and nibble on some beef jerky that the mini bar was offering.....yes, beef jerky, and gum. Before we could see the latest Hollywood hits we got lost in a sea of "Adult" selections. If I say there were about 50 -60 movies being offered I wouldn't be exaggerating. What I found even stranger was that in all 60 selections there was only one GAY movie . It was so obviously an afterthought I felt pity for it. That poor guy (a solo, no less, when everything else was 2somes, 4somes, gang bangs and whole cheer leading squads) must have felt so alone and lost. I know, I could relate. I didn't see anyone who remotely resembled me.........

The 3 of us were hungry and decided to go to the restaurant on the 5th floor before heading over to the concert. That's when the trending began. Boots, boots and more boots. Groups of friends were meeting up in the bar and it was as though they all went to the same store. In some cases the boots on a couple of women were identical . They tended to wear what looked like sweater dresses, tights and boots. The sweater dresses were all VERY short and the boots very high. There were a lot of sweater tube tops over minis with tights and boots. Everyone in that room for the most part was thirty-ish. Once I took in the scene an insidious look for the guys came into focus. I feel a bit blind to how men dress, because I just didn't realize that there is a costume that is de rigeur of almost every man walking upright. I mean a costume with almost NO VARIATION at all : untucked dress shirt over jeans. Oh, and whether the guy is overweight or in good shape, the shirt is at best 2 sizes too big. Most of them , when you looked closely, were overweight. But the beauties with fit tight bodies didn't dare be left out, so their shirts were over sized too. Now, I'd seen this over this past summer on the weekends at the beach, but I just assumed it was hot and linen loose fitting shirts worn out were more about comfort, ease and being cool. I had no idea that this is the uniform for men to feel in the groove...in step. On Point.

After 1 hour and not getting served dinner( the kitchen was overwhelmed with the timing of the concert goers) we left and headed over to the venue. I was hungry , pissed and stymied by the throngs and their utter lack of individuality. Inside the huge hall I grabbed a couple of bags of popcorn and we headed for our seats. Considering the concert started an hour later, there was plenty of viewing time. The audience in the end was the real show. But from a bar of maybe 100 to a hall of thousands , I still saw the same look until I couldn't look any more. It was at this moment that a pair of UGGZ walked past and I was re booted. I was actually thrilled to see a pair of UGGZ. That girl was the Iconoclast, she was not afraid to go headfirst against the tide. There were some very trashy silver glitter 6 inch pumps, but that's what I expected. The UGG factor threw me for a loop.

Well the concert was fun. Visually it was incredible. Audibly, it was a little disappointing. Maybe because her divorce had been granted that day or she was tired from a long tour, there wasn't much Snap Crackle Pop. Soggy, a bit flat and a little too long is closer to the truth. I did have my eyes opened to what people are wearing at night. It ain't designer, that's for sure. It's totally middle market to tarted up lower end. Considering we're all basically broke it doesn't really matter as long as we spend something on having a good time and feeling like we look cool. I just wish people would take a few more chances and try to push the envelope a bit. When I saw a guy with his shirt tucked in, even with a bit of a gut, he looked so much better and sexier than his Brothers of the Perpetual Cover Up.

You'd almost think it was a form of male maternity wear.
Posted by Fluff Chance at 7:41 PM

u used my line

It's not wrong--- its flattery