Barneys Bounces back from the Brink 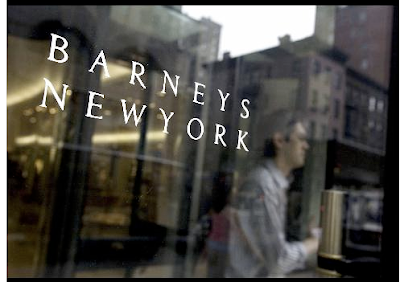 We can all breathe easier, even sleep more soundly. Barneys , like the good ship Poseidon, will have it's morning after. This restores my faith in the newest form of investment. It's called the Bail Out. Istithmar , or whatever the hell they're called came in and dropped not 10 million but 25 million into the piggy bank to shore up vendor confidence. Now this number wouldn't be qupted , so it's probably more like 12-15 million instead of the original 10.
On the very next day pictures and print covered WWD with the grand reopening of a new and improved Barneys in Chicago. Other stores are opening in a few other key cities and across the globe. That just struck me as a little strange. One minute you're sprawled on the pavement with a cup in your hand and the next you've taken the $1 bill you just scored and are now opening a smart boutique, the one that you were leaning against with the windows being papered over. Why not put that money into securing what you have , taking care of your vendors, maybe holding onto some staff who are about to be papered in pink slips?
I know you have to be in it to win it. I also know that Chicago was a project in the works before the sink hole which is American business opened WIDE. You have to ask yourself what these investors were thinking. Simon Doonan the Creative Director, whom I met the other night at a party is as GRAND as he is diminutive but that's a short story and not a very interesting one. Still, what goes through their minds? Expansion and more expansion when all they can do is put everything on sale as they tag it and load it onto the racks. I walked past the windows last night on Madison Avenue and was dumbfounded at the unattractive display of distressed blue jean dresses, gowns and pieces by a bevy of DIRECTIONAL designers. All was collage. Unappealing, absurdly over-priced and ultimately depressing. It seems the wolf is no longer out side the door but roaming freely within. The look of those windows were certainly the result of his overly fecund and clever humor/imagination. It looked like a view into the darker side of his head. It brought me back to the night we spoke "oh so briefly". I thought I'd be meeting the charming, funny, engaging and quick witted elfin genius behind Barneys. The person I met was a garishly dressed, dismissive , cold little man without a shred of grace or charm.
With that said ,I imagine all will be well with Barneys for the foreseeable future. The Istithsmar Group ( can't remember the spelling to save my life) says they will continue to infuse more cash as need be ..... My feeling is that they pray someone will take this store off their hands ASAP. The foreseeable future used to mean just that. Now it means 3-6 months max. Barneys fall selection will get shipped and paid for .
The following season will most likely find them asking the same question : Daddy, can I have some money?
Posted by Fluff Chance at 10:56 AM

Ah yes, the Chicago Barney's project--a perfect example of everything that was wrong with the economy the past few years. You ask what those guys were thinking? They weren't. Or I guess they were thinking what all those other condo developers were thinking (oh it's funny-sad to see all those half-finished vacant buildings littered around Chicago) which wasn't much--some imaginary world where we could all keep consuming with no end.

That store is a giant sinkhole. I'll be waiting for everything to hit the Filene's racks.

Of course the timing isn't great, but why wouldn't they have taken the opportunity to expand their store when presented with a rare opportunity? Chicago is one of Barney's biggest markets and yet they were still in that small building since the early 90's while Dallas and SF were getting new stores with better amenities.

New York is the only U.S. market that I think can handle a Barney's. Haven't been impressed by any of the other stores, though I haven't seen Dallas. They should spend the money on the website instead and take on net-a-porter.