Is Iman a terrorist? 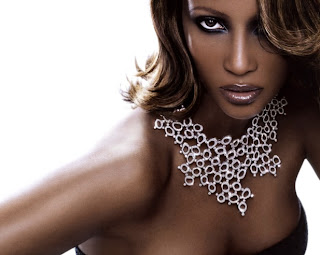 Iman is now Imam according to the NY Daily News. The writer who skillfully performed a craneoplasty on "The Fashion Show", the new season which airs tonight starring Isaac Mizrahi and Iman referred to her as Imam a total of 4 times. I thought it was a mistake until I kept running into the name again and again. From the sound of it, the new name may be an apt one. Assuming one equates that name with all things dark and destructive it appears to be a tag that fits her new guise. It appears that she is that avenging style angel of death. She bombs, blasts and water boards the unwitting an not so innocent contestants on this dead duck show with willful abandon. Just like a real terrorist. It appe 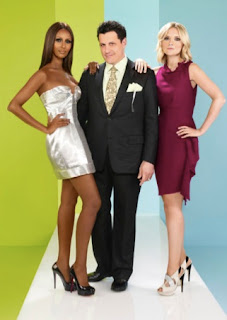 ars that reality fashion tv has a new formula: take no prisoners and spare no viewers. This show noisily sucked wind with Kelly Rowland its first time down that rutted catwalk. Though the formula sputtered with her "tepid" contribution the producers couldn't resist the frisson of having a woman of color in the co-pilot's seat. Enter the erudite, multi-lingual and arrestingly telegenic Imam. All the better if she walks tall and carries a baseball bat. Isaac might've had one too, had it fit in his monogrammed L.L.Bean tote. It didn't so he couldn't.
Even the trailer for this show was all about Imam. Her vitriol was so over the top she could barely shriek her protests. All staccato and flying spittle she declares while "judging" that the work of a clueless "designer" is a "Fashion Emergency" in need of an" evac-oo-ation". Is this fashion speak for "Code Brown"? She may speak 5 languages, but her annunciation, like her legendary walk, is all her own. Apparently, her style cred as an uber-supermodel is writ large with her unusual choices of costume, hairs and make-up. Hairs is the only way to describe her weave which is perfectly in keeping with her new i 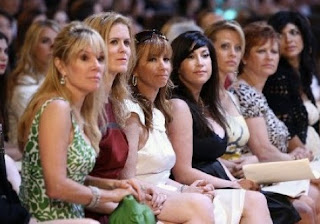 The reality fashion show is a curious species. It makes a much better radio show than television. Using your own imagination would be infinitely more satisfying than looking at these characters. This is just another hatchet blow to an industry that used to be about beauty and style. I just wonder why two success stories who worked their way to the top are screaming and swinging that hopelessly dull weapon of mass destruction. You watch and tell me what you think.
Posted by Fluff Chance at 5:22 PM

I love your blog!
Yes, I must say that I will NOT watch this season of The Fashion Show. Not with Iman's fake Russian accent, I can't take it. I was amazed at the usually stunning Iman, all but bark during her presentation, it was like imagining Rupaul angry and on acid. Her face barely moved and I doubt that the reason was too much caked on makeup.
I prefer her in the pages of a magazine, mysterious, beautiful and QUIET.

I hope to the heavens that South Park spoofs this show. Now that would be worth watching.

I'll stick with the Real Housewives of Atlanta.

The show is flipping hilarious! I love that fake Russian accent and that Iman has hardly any facial expressions! It's not a little bit campy in the Natasha Fatale and Boris Godinov circa Bullwinkle & Rocky way! I just wish Isaac (Boris) had more lines!

I ENJOY YOUR WEBSITE BUT IS OFFENSIVE TO EQUATE A PIOUS ISLAMIC RELIGIOUS LEADER WITH A TERRORIST. SINCE WHEN IS IMAM A BAD WORD, OR HAVE A NEGATIVE CONNOTATION TO ANYONE BESIDES RIGHT-WING LOUD-MOUTH RADIO HOSTS?

I THOUGHT THAT YOUR ABILTY TO COMMENT WAS MORE CAREFUL THAN THAT.