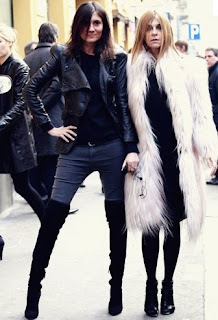 This is the second installment I received from an interested reader. It is a bit stranger than fiction so I thought you all might find it interesting. This is a translation from the original that Anonymous was kind enough to supply, and no, I am not she. The first is attached as a comment to an earlier post and I'll include it when I find it.

"Off Topic a bit, a follow up on the French" Voguegate"
Translation from another insider, same place:blogs.lexpress.fr/cafe-mode from "Jane".
All Vogue employees received an email December 17, informing them of the dismissal of Carine Roitfeld.So she was fired and will not run the French Vanity Fair as suggested.
An inquest is set to take place by Jonathan Newhouse on certain shadowy business such as enormous expenses for shootings that went to certain production companies which in turn would send a thank you payback to the interested. People are starting to talk. Emmanuelle Alt upon her hiring as editor had to forgo any consulting she had such as Marantz, Balmain and others. If any doubt comes up on consulting she will be fired immediately. Carine Roitfeld 's children also profited wildly from thei 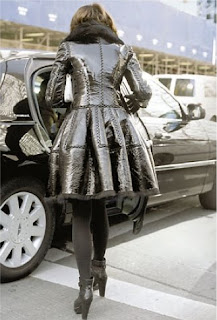 r mothers' reign. Roitfeld was known to call certain fashion houses, asking them to help her son now an "art dealer"with financial help disguised as sponsoring/promotion/PR during fashion weeks, such as the one by Armani costing $ 100.000. A small donation to the Roitfeld family ? also her daughter was doing consulting for Prada and MiuMiu, first class plane tickets all over the world, just to give her opinion on a collection ? Also all the clothing deliveries to her hotel room that were never returned, but then Ms. Roitfeld would make a personal phone call to thank the designers for their personal donation to her daughters' closet and maybe an editorial in Vogue. And we all know that it was worth quite a lot to them.So Emmanuelle Alt lived in that environment for 10 years, are you going to tell us she is different ? Voila'. "
Personally, I am not a huge follower of conspiracy theories or hearsay. Considering the "Jane" behind these opinions is someone in French fashion it doesn't seem that much of a stretch when you consider how small these worlds are. Another voice in the crowd........
Posted by Fluff Chance at 3:56 PM