)
To release (repressed emotions) by acting out, as in words, behavior, or the imagination, the situation causing the conflict.

This feels like a good place to start with regard to the upcoming collections. This season like no other will be the utter definition personified in clothing. Fashion that is a reaction to or against the climate in which we now live. Big word(one I just learned last night) but a very useful and timely one. There is no right or wrong in this idea , only a very compelling picture that it conjures. What will we do? What will we see? And most importantly what will be the end result.

Judging from the menswear collections that happened in Europe , there appeared to be a 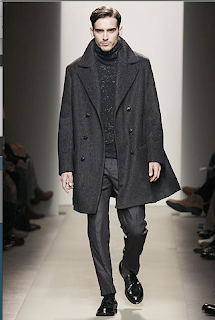 consensus in the imaginations of many design houses. From artful , even humorous offerings from say Dolce and Gabbana to a more somber and sensitive offering from Bottega Veneta, Burberry Prorsum and Jil Sander. We are looking fort comfort in a cold and threatening climate. I don't think that the fact that it's a fall season or spring, the end result would most likely have been the same. It comes down to a reality check, a correction of sorts. Men will probably look and dress the way they feel:seeking security. The Teddy Bear Effect.
Personally, I think it's brilliant when designers, artists ,writers, musicians and lot of other types cut through pointless artifice and express truths. Honesty is so threatening to most people. The clothes I saw spoke to me of Honesty. There is a humility in this way of creating as it's truly modern, it speaks to the present and it honors the integrity of the craft. Fashion should always reflect in some fundamental way the atmosphere in which it is born. 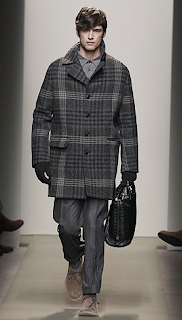 This in no way negates creative vision or an effort to move the ideas forward. This is more a statement about the nucleus or seed from where the collections are hatched. I felt as though the clothes were a code to be deciphered. They said in so many different ways that we all possess the pieces it's only a matter of putting them together differently. Metaphorically, We all have the knowledge we only need to use it in a fresh way. How great is that? Add here, subtract there and BINGO! you're on a fresh path. So many great images from the streets of Florence, Milan and Paris were taken by that master http://thesartorialist.blogspot.com/, a very intelligent blog. His lens captured perfectly this idea. Go to it and see for yourselves. It's like a road map.

The couture, which is it's own abreaction is a story all it's own.It's an even more complex one, but worth dissecting. I'll toss that one around next.
Posted by Fluff Chance at 6:20 PM

We have read a lot about Michelle Obama's clothing, and I appreciate her subtlety which has been unexpected to many. Certainly she is beautiful and striking enough to be more experimental, and this may happen as she grows more comfortable with the overwhelming attention.

I haven't had a chance to read much about the men's fall collections, but based on your observations and what I've seen in a few pictures, I now wonder if President Obama has been an influence on the new honesty in men's clothing. Thus far, his honesty in the political realm is an inspiring change from Bush, so why wouldn't that touch and inspire designers?