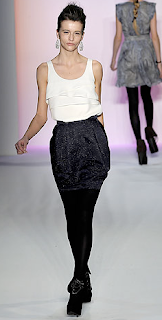 Abaete:(at left) so so. Nothing newsy just some good hair and make up.

Prabal Gurung:(at right) Blass from the past. Better than Peter Som , but not good enough. Same fabrics, no truly new ideas. A quality of craft that was acceptable but not inspired. Looked too much like M.Vollbracht after a face lift. The real problem was that the clothes didn't look very young(particularly this one) so the idea of a fresh take , a message of the modern was left on the cutting room floor. Admirable start but a voice neither clear or his own.

Charlotte Ronson:(below left) the only point of interest was Lindsay Lohans's presence. The front row looked as bored as the clothes looked boring.It's flannel jammie time.

ay, just static clothes in the hobo style. This , that and the kitchen sink. Uninteresting self conscious coolness that was the furthest thing from cool. Hasn't he learned anything at Blass or in his own atelier. A perfect example of ego having gone unchecked. Some designers feel that they must show and that their clothes are runway worthy because they've shown many times before. You must look with an objective eye and be your own toughest critic. This collection looks as though no one said anything but ,"YES". I say ,"Not this time...".

Jason Wu: (below left)Well everyone was there to see the birth of the newly appointed prodigy. Was a middling show with a few pretty things . Most of the exits were naive , technically and artistically. Granted, the pressure must have been cr 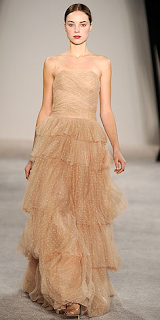 ushing. In a situation like that , I think he should have done less and what was done should be done perfectly. To big a hurdle in too short a time. You are allowed to walk before you run. In this case , learn to balance standing still before taking steps . People would appreciate it much more . I would have. His pony was jumping a fence that is suitable for a better schooled and more experienced horse. He has obvious talent, as this dress clearly shows. This was by far the loveliest in all 36....this was #30. I'll even be so obnoxious to say that this would have been a much lovelier, alluring and sexy choice for the Inaugural ball, but that's 20/20 hindsight. No overnight wonders have ever been born in this business. They've all paid their dues. He's no different.

Three as four: (right)Who could see it in that gallery space so crowded you

could neither enter or see clothes barely visible over the heads of the unruly crowd. What I did see was more of the same. No news. Well actually the news was they can effectively reproduce the same dress about 12 times with slightly different colors and toss in about 4 suits. So there you have it : 16 looks that look like 2.

aged an elegant presentation, only it wasn't really hers.It referenced other more memorable collections from last season....mostly Stefano Pilatti's for YSL, but even that is a stretch. These were not horrible clothes, just lifeless and ultimately useless. Some unusual cuts gave one or 2 of the cocktails and gowns some interest, but there was a lack of quality in her choices of fabrics. This dress with lace overlay is a case in point. It looks like inexpensive machine made lace from China. Cheap looking fabrics in awkward proportions do not a collection of NOTE make. It was a lovely staging...more elegant than most of the others, it just would have been nice had it been her voice we heard..... More an inexpert Lip Sync.

You may find my criticism curt and overly critical, but with so many showing and so little worth seeing, I feel compelled to cut to the chase. When it's great (to me) I'll say. Meanwhile, I call it as I see it. I haven't seen much yet. For pics of these collections to judge for yourselves , go to style.com.