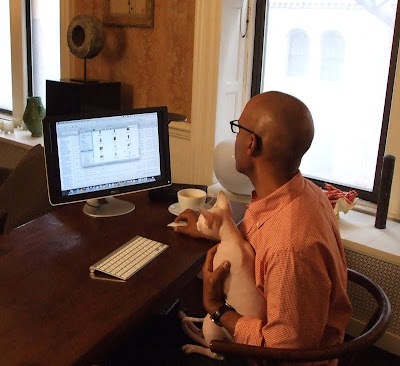 With the Collections here and abroad over, I've had time to digest and ruminate on Designer's offerings for Fall 2010. Without the pressure of deadlines, I take my time. It's too easy to get caught up in the moment and blurt opinions that are not always authentic or honestly felt.

New York was a bit of a blur and Paris was more intense and weighty. Perhaps it has something to do with the fact that Paris, in particular, is historically the birthplace of fashion as we know it. In the old days before the calendar of shows was changed and we the Americans presented our collections after Europe, everything had more clarity. American designers, both established and those who were Emerging, had the benefit of time to make stronger, clearer statements. Now it's all a rush to the gate. This is not meant as a slam in any way, but I've always sensed a degree of anxiety when looking at our industry working as quickly as possible to lay down the gauntlet. The large,well financed houses do it with relative ease but the smaller houses too often look semi-prepared. It's an unfortunate reality but that is my feeling. When a designer is trying to make and ship orders to stores and has the added burden of creating a new collection at the same time, there will be a schism. This is all too apparent with smaller houses.

There was a prevailing feeling that the Americans needed/wanted to show first to lay claim to originality and not be perceived as following the leads of the French and Italians. This was never a reality but more an insecurity on the parts of some established design houses with fragile egos. We, the American fashion industry have always marched to our own fantastic drummers and always will.Whether we go first, second or last that will never change. The benefit of going last would only give us the benefit of much needed time and thought to push harder and reach higher. As a consequence, the season like others in the past, felt too collectively safe and not as imaginative or forward thinking as we're capable of being. Collections I saw here that moved me or didn't resonate that much more powerfully now that the dust has settled. The young guns in a few cases were very impressive. Some of the "directional "collections that have commanded so much attention and praise looked less solid than one would have expected or hoped for. I want to revisit some of them now and share why I feel this way. It's like a great bottle of wine that needs to breathe a bit before decanting. I hope you won't see this as revisiting already harvested fields. 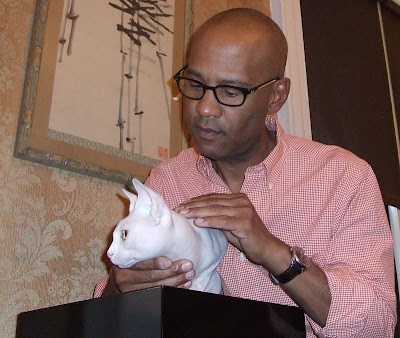 This makes me think about the perception of Bloggers that some people and magazine editors have; that we're a pack of armchair experts without knowledge or experience to intelligently discuss this business. I have to thank some of the trailblazers like Bryanboy and Tavi, to name two of the most recognized members of the Fashion Blogging Community, for pushing the envelope and creating a dialogue. They've helped so many of us to have a seat (or stand) at the table. There are many of us who are passionate and committed to what we write and that's a new fact of life in this field and many others.
Posted by Fluff Chance at 9:13 PM

Well thought and well said my PRINCE of words! Ahhhhhh...

wow love your sleek computer and Fluff is looking good!
There is so much instant information now, how can one compare the old days?
Yet hasn't there always been tremendous angst getting a collection out?
plus ca change plus c'est la meme chose

Hey it's Amy Flurry. Did you receive my request to profile you for eBay's online magazine, The Inside Source? I sent it to the gmail account I had about a week ago?
Best,
Amy Flurry

Amy,
I didn't get your email. Please send it again to organzavoid@gmail.com. I'd like to speak with you.
xo, Fluff

I love your writing, and I hope you get more professional notice. And get paid to do it. :)

Don't care for the personal photos. Let the writing speak for itself. Mystery pays its own dividend.

I think there has been a dialog going on, though the mainstream media tried its best to first ignore bloggers, then hop on the bandwagon and imitate them.

The Fashion Stake blog had a great article on this very topic, which I responded to on my own blog as well. In fact, I appreciate what Fashion Stake is doing by bringing web2.0 values and expertise to the world of fashion in a slightly different way. And of course, what they're proposing to do with crowd sourcing is new as well.

As usual, a thoughtful post, and much appreciated. Good job.