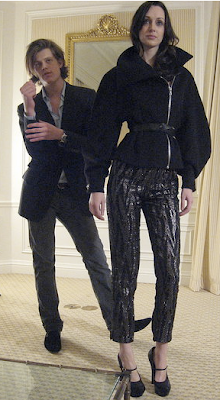 Wes Gordon is a prince. There are hacks, pretenders to throne and then there are princes of the blood. Wes is one of the latter. Fall was his debut and he walked through that door with more than just perfect posture and charm, he delivered a very fresh, well conceived collection. Unlike many young, emerging talents Wes had an obvious plan. It takes courage to start in times where too many are in flux or closing businesses. Wes didn't waste his time with a strategy, he went straight away to the logistics. His CV states that he graduated from London's Central Saint Martin's and worked as an apprentice with Oscar de la Renta and Tom Ford. So his pedigree is not only impressive, he has a real design ethos to back it up.

The idea behind this first collection isn't so much a thematically driven one. His woman isn't traveling back to the apartments of Madame du Barry where she lounges on a Louis Quinze chaise longue in a laudanum stupor while Paris falls to the rioting citizenry. She instead likes the feel and

style of a young Lauren Bacall. He seems to want to be in this moment dressing women whose lives have purpose. I would have expected lots of fantasy and instead found practicality.
Granted, there were obvious signs of an artful eye and rich imagination for unusual detail at work. There was also an understanding of what high quality workmanship means. Wes seems committed from the start to deliver

clothes that are timeless and very much of this moment. It's a maturity that I don't often see in young designers or old ones, for that matter. He's not wired for expendable, throw away clothes and that alone sets him apart.

So no line up of 20 gowns and 30 cocktail dresses or red carpet hand outs. He's not a rest stop for Tinsley or any of her debauched BFFs. His seriousness would put off the Housewives, as they only understand the obvious and the banal. He's so lucky he won't have to disinfect his studio on a daily basis with that sort of creature. The people and women who

will appreciate his work are the confident, self possessed ones. There are sleek, well tailored jackets and suits that incorporate superfine wools with insertions of leather. Some have razor sharp stitched welts in a star motif across the back which is his leitmotif and the symbol for his logo. Smart, sexy dresses that can be worn for day or night come in jersey one minute and silk mousseline and crepe the next. Though there aren't a slew of gowns, the ones he made are surprisingly simple on first inspection and not at all when you get up close. A white column with fan pleated detail at the neck with a deep open back both defines and suggests a slim long line and all with just one color and a precious little detail. It presents the woman, taking a back seat to her allure, but gives shape and height to her without any obvious contrivance. That's the sort of design and dress making that turns me on. But that's the same sort of dressmaking that has all but disappeared.

It's exciting to see these gifts and this understanding in someone so young. His humility and obvious respect for women is clearly expressed in his work. You could have a conversation and hear his responses just by looking at these clothes. His debut is an impressive one and I find myself wondering what comes next.
Posted by Fluff Chance at 7:44 PM

I really like a few items I see here. The white dress is beautiful. I also like the sheer top. Overall, I think the apparel is very nice.

Nice designs? Yes they're 'nice', but hardly a kingmaker they be.