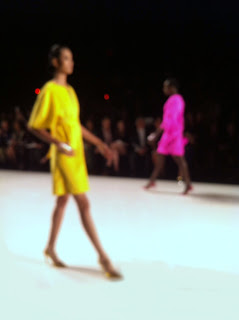 How to describe something there are only paltry words for? Modern? that's too banal... Rich? that simply overstates the obvious... Singular? that is an under-statement of the obvious.. Inspired? that's a baby step in the right direction. Exquisitely conceived and presented? now we're getting somewhere... A vision that alters the eye; the perception of what fashion can mean and a master's approach to technique, a laser sharp focus and an established oeuvre from which he never ever strays? that begins to describe Ralph Rucci. A brilliant showman who knows the power and conviction of his message and just the way to share that with the world is the magic of his work. All of these qualities are precisely what separate him from the masses. And that includes the greatest names in fashion in this country and internationally. Sitting in his audience last night was not just an entertainment but a privilege. And still, that pales against the trove of beautiful, soul stirring clothes that paraded down a runway of glistening white patent. 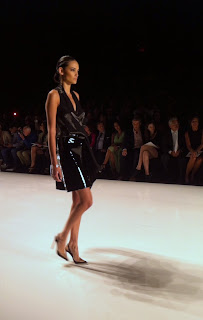 The audience is made up of the usual retailers and press, but it is the army of his ladies paying homage to him in hundreds of designs from yesterday to yesteryear and all strikingly chic, seductive and assured in their Chado dresses, suits, coats and gowns. It was hard not to stare. Despite some of their high wattage celebrity, it was their sartorial choices that mesmerised. How often does one see a theater filled with women with extra-ordinary style, allure and consequent beauty? This was a phalanx of Couture clients at a ready to wear show in the circus tents of Lincoln Center.Talk about contrasts. 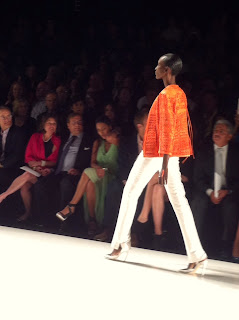 The music started as an explosion sending the first looks out in white so vivid that they roared. From the first, it was his cuts, all planes of crisp fabric with seams that defined the shape and in turn created the detail. Not one inch, angle whether from the front, the sides or the back was left as an afterthought. A zipper placement whether vertically placed or spiralling from side to back possessed the same integrity as insertions of clear plastic or horsehair in contrast to the color field of the piece. Hems of horsehair or tulle with applied lines of contrasting color created a frisson as much as the dresses they punctuated. The explosions of music with a ticking beat repeating and building added to the mood of heightened, rising crescendos perfectly paced as the clothes and their story unfolded. 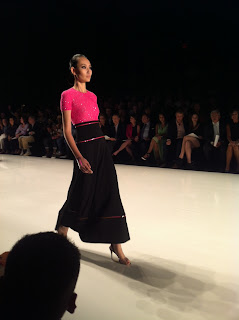 Colors emerged like blooms as if forced in a hot house: Shocking pink, cerise, canary yellow, flame orange, lime green and all playing off of fields of white and accented often with the thinnest stroke of black matte crepe or patent leather. Each look elicited an emotional response. Whether it was the most subtle black crepe shirt dress with a tie belt faced with cream and completely lined in cream or a dress in electrified pink with a back in icy white with black patent lines dividing the planes and running up the back of the dress, I was stunned that simplicity mathematically measured could pack such a potent punch. The same for a gown with a short sleeved caviar beaded shocking pink tee shirt with an attached long black controlled a-line skirt with the same minute lines of pink dividing the plane in 3 places descending the skirt. 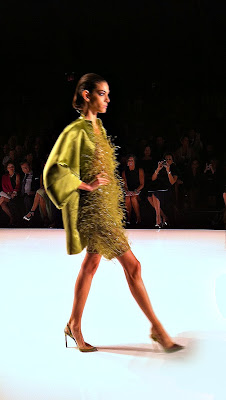 Color came strong and pulsing on monochromatic coats over dresses with his signature insertions of hand tied braid or contrasting lines of color shining against the matte bodies. These lines sometimes echoed the ribcage of the body or in the case of a sober black crepe pantsuit, the back was scored and opened with patent leather piping, a sheer scrim of tulle with abstract planes of black tossed onto the surface like the canvas of an Expressionist painting. 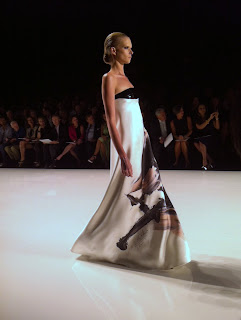 Expressionism by his own hand is a passion of Rucci's with a number of jackets, coats and most dramatically his "Infanta" gowns near the end that were flowing, asymmetrically cut panels covered in bold strokes of yellow, black and rose with stones scattered across the color. And where they opened in back a column of minute glistening pailletes spilled down like the last traces of an intense dream. 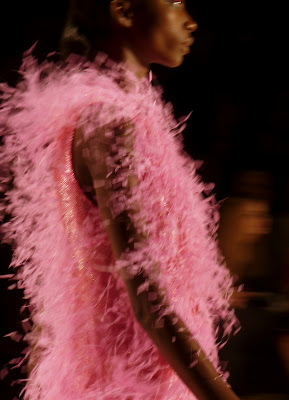 Feathers appeared but not in profusion even when they covered bodies beneath in shimmering lime and shocking pink lame'. You saw through the fluttering feathers to a ground of lame' that looked to be on fire. The feathers attached upside down from stem to tail causing them to roll over and bob  as the model walked like a mist of intense color floating around the body. 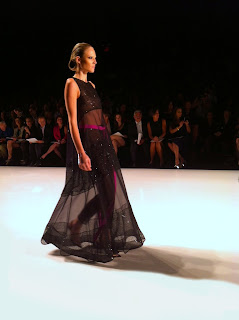 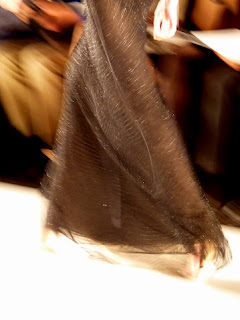 The black beaded evening skirt with a feather enshrouded top and bolero was a web of intersecting lines whose ground of chiffon one could peer through. Deliberate, hand drawn and lined in minuscule jet crystals drew the eye to this map of the model's body. In short, the detail was at once hypnotic and exquisite as a whole.

Ralph Rucci's brand of bravura couture design is as subtle as a kiss, but one you long remember. The same can be said for his whisper; a faint murmur that continues to roll around in your subconscious long after the lights have come up and the masses move on.

His are the clothes of dreams.

I call them "perfect".