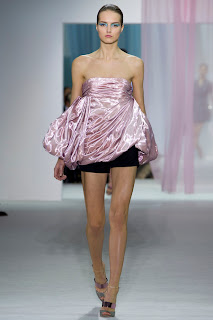 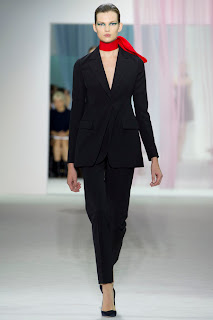 Surely everyone and her stylist was waiting with bated breath to see how Raf Simons would follow his debut at Dior. My first response with the couture was that it was a bit light on effect and somehow oddly safe. A couture collection , certainly one at such a venerable house as Dior, should give a designer the means to soar and explore. With atelier that are capable of unimagined alchemy, why such a slim, even alarmingly stripped down offering? I don't think the world would suffer any less without yet another rack full of Bar jackets. Still, over time I came to realize that there was something beautiful and compelling in his restraint. Perhaps, it was the walls and walls of blossoms that colored my thinking. Their profusion, incredible colors, scale and probable intoxicating scent seemed to upstage the show that paraded under their exquisite noses. The severity of the clothes seemed to pale in contrast to the setting. So I sat back and waited to see what would come next. 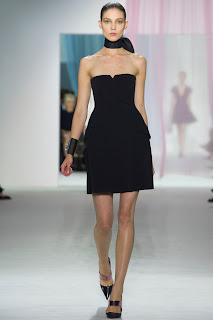 Today is the tomorrow we all dreamt about yesterday. With his first ready to wear collection for Dior Simons has nudged the envelope a few centimeters forward. I ran back to my hotel to get a look as soon as my IPhone beeped that the images were in. I'm hanging out in Montreal for the week while Anton attends a conference. It seemed fitting to be here as it's such a French environment, even though it's still on the wrong side of the pond. I digress.... So back I ran, and here I sit. 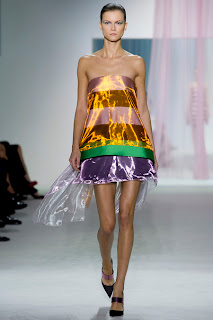 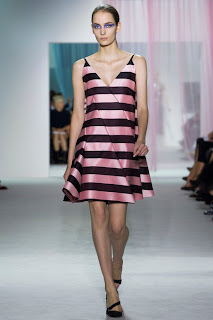 The first looks took me by surprise. I hate to jump to conclusions, though like most humans, whether slinking on four hairless legs, or walking on two, I am not immune to quick judgements. The parade of "Smokings" felt so familiar, but not in a Dior-ish familiarity. They were so (Yves)Saint Laurent. There was a bit more volume down below in a strapless version, and the white ones were a departure, but still they didn't strike me as Dior/Simons. With all the talk of a prize fight between Raf and Hedi Slimane, this beginning felt like a theft of the (Y)SL script, an odd sort of appropriation. As the new (Y)SL is yet to debut, I seriously doubt that Slimane will opt to ape the bible we all know as Yves Saint Laurent. 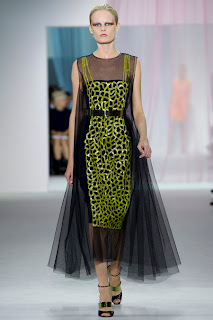 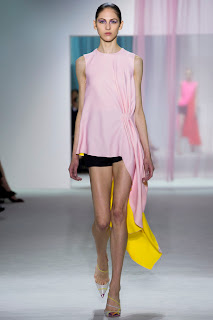 Next came interesting miniatures of vintage Dior-isms in metallic organza, all draped and tucked over little black shorts. They were sweet confections but the shorts felt too derivative of so much that's been shown the last several weeks. The metallic organza also felt derivative of Armani's over heated Prive' collections of the last few years. Again, I have to stress that I don't approach fashion in order to 'relate and tag' to preceding designer's work, unless it smacks of it. 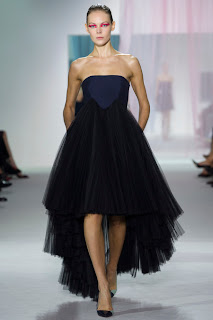 The graphic color field dresses with asymmetric panels drifting off the sides and contrasting colors appearing on the undersides were beautiful as were the crisp satins with contrasting panels of color and the stripes in duchesse satin. The embroideries were the most satisfying with shocking yellow paillette linear patterns on floating black chiffon. The trapeze shapes of several of these later exits brought back the heyday of Dior/YSL A, H and trapeze lines, but without all the stuffing. Still some of the cocktail/evening looks with layers of frothy tulle skirts looked forced. What wasn't forced were a string of very spare dresses in black with little or no decoration. A jacket or two with a small smattering of floral embroideries dancing near the the bottom were smart, lovely and felt original. 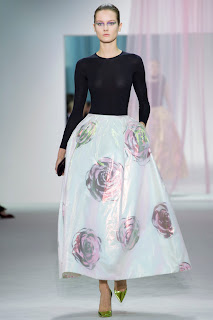 The end of the collection was vintage Jil Sander/Raf Simons with full printed skirts and black second skin T shirts. Very pretty but not much of a stretch. I'm sure the rest of the planet is going to need smelling salts today like they did with his debut couture collection, that is until Hedi Slimane shows (Y)SL next. Then they'll most likely crown him king and need smelling salts all over again. The direction that Raf Simons is charting still feels rather vague, like the new IPhone 5 maps app. The land is clearly laid out, but how to get from one place to another is any ones guess.
Posted by Fluff Chance at 2:13 PM

I'm loving Raf's designs, yes a bit safe, but they really grew on me.

HI Fluff,
So after watching it live on Diormag...I have to agree, no state...Raf simons is an amazing designer....just not quite the right fit. If he was to take over for Comme de garcons, or Celine, fine he fits in well...but Dior, I believe was always about extravagance(in shape, embellishment and style)...When I watched, I realized if it didn't say Dior on the venue, it seriously could have been a collection by any other designer and none be the wiser.....AS for backroom gossip that will have to wait a bit....ssshhh!

meh, more ready to wear than couture. I'll keep an open mind but....

What is going on with Paris this season? I have been underwhelmed. Also, is it just me or are you getting that design-student-vibe from many of the collections.

A lot of designs that I am seeing look sloppy and inconsistent.

I am in Paris coming back Thursday, yes my answer is MEH !!!!!

Peeking trough the new Hedi Slimane store on Montaigne hoping to be open for the show.Do not understand the Dior show, Europe is a powder kaig ready to go.....waiting for Slimane, want to go home
Spirou