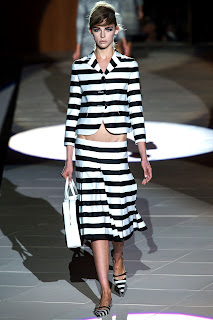 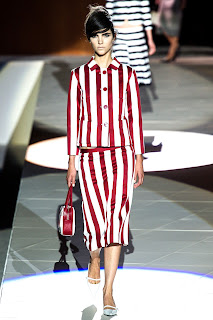 When reviewing a collection one is supposed to do it clear eyed, without sunglasses, and never with any personal or professional axe to grind. It's unseemly and unprofessional to comment on a designer's personal life, their foibles, quirks of dress, excessive tattooing, abuse of cologne, megalomania, obsessive body building, sparkling good health, their penchant for romantically hitching their wagon to rent boys and out of work porn stars. No, none of this sort of talk has any place in the discussion. After all, we all just saw from Cathy Horyn's unfortunate mishap, that commenting on a designer's collection beyond the actual clothes can get you publicly upbraided and can even hamper one's chances for future invitations to that designer's shows. The idea is to dish  (responsibly) and not get dished. That said, let's get back to the task at hand: Marc Jacobs' spring 2013 collection. 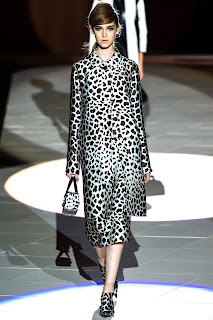 First, let me come clean and lay down this heavy burden. I've long looked askance at the antics of Marc Jacobs both on the runway and in the locker room. Am I envious of his physical vitality? Yes. Am I just a bit envious of his enormous success? Well, um... uh, ok... yes. I admit it. Yes. So is it easy to put that all aside and confess to you all what I'm going to say next? NO, but still... "I LOVED Marc Jacobs show". There, I said it. He had me with his first satin black and white striped short jacket and low slung pleated and striped skirt. "Hello, my name is Fluff and I'm an addict. I'm unable to resist stripes". Go through my closets, my chests of drawers and the evidence of my addiction will spill out for the world to see. Marc, like me, is a connoisseur of stripes. They must be intelligently scaled, colored and placed and must above all relate and interact with their fellow stripes in a compelling way. In the end, it is the active and not the passive stripe that moves the conversation forward. 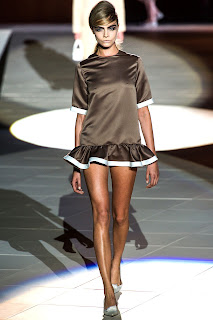 His army of models in black/white, tan/white, yellow/white, red/white, silver/black combinations of stripes, dots, spots and checks were so focused, smartly cut and elegantly proportioned. A silver/black leopard printed silk coat and dress along with its partnered jersey leopard spotted dress was just this cat's meow. I purred, I cooed, I sharpened my claws on the monitor's screen and begged for more. 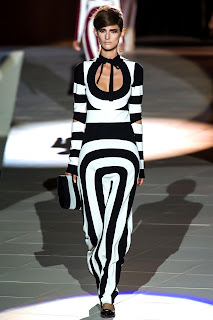 The message, something that precious few designers have or even consider, was crystal clear: God is in the Graphics. No need for silly digressions or a section of leather and lace, just bold, brash, bravura graphics delivered at a strong and steady pace. The show was a mere 7.5 minutes with a ton of looks. A spotlight followed each model as she paraded the enormous runway. Even the shoes and bags were a perfect marriage to the clothes. 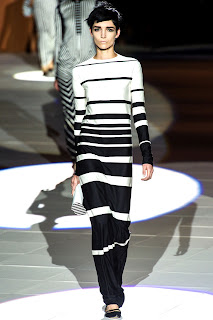 Jacobs was just as clever with a series of plaid and checks in jackets and coats over dresses and skirts. Everything was handled so masterfully, that it felt as though he had traded in his cloying cleverness for a kind of brilliance. It wasn't until near the end when long jersey columns in enormous snaking stripes of black, tan and red on a white ground with cut out necklines, front and back, did I really start to pace. The engineering of those stripes, playing games on the surface of the body just had me begging for more, more, more. ( I told you...I have a problem with stripes...) 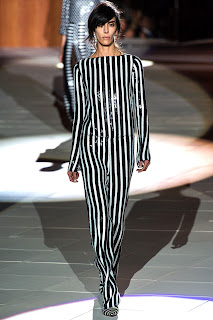 When the lights fell and the show was over, I expected the usual tedious parade, but the models disappeared behind a wall of mirrors. The wall then opened like a thousand doors showing the entire collection lined up across the width of the stage with everyone advancing like an army of bold, bi-colored beauties. They took position in a large triangle with every look visible individually and the lights were extinguished. Damn....

I am heading back to your last post to rest my eyes.

With the exception of the graduated striped maxi, those clothes are unwearable.

I fully agree. Marc Jacobs show was a stellar exercise in making a clear and fresh statement with styles that were ultra modern and delightfully spirited. In a time when the Spring collections from various American designers proved once more that the days of fashion statements of the yesteryears are no longer something to look forward to each season, Marc Jacobs cleverly triumphed with excitement and authority. Bravo Marc.