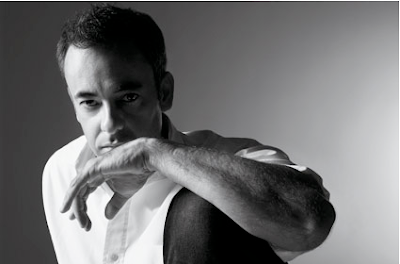 Yesterday, while slogging through the damp, lukewarm drizzle I passed Francisco Costa of Calvin Klein standing in front of 550 Seventh Avenue trying to hail a cab. I make a point to keep my eyes at face level in this town for the simple reason you never know who you'll see. If one did that all the time, you'd be shocked at who you'll pass or happen to be standing next to. Seeing him gave me the urge to go up and say something complimentary. His work and taking over as Creative Director of CKlein has been pretty extraordinary. My perception of him has always been positive as he's very talented and appears to be an honestly kind soul. But it was friday, I felt like something the cat spit up, so I kept on moving.
When my errand was done some 10 minutes later, I returned the way I'd come. There he was still standing there trying to get a cab. You'd have thought he was a black person trying to get one to stop. Black people tend to wait 5 times as long to get a cab. It's got something to do with their complexions , I think. Maybe they're just hard to see, even at 9 in the morning. I don't know , but it takes forever for people of color, especially people who are black to get cabs. ...until recently when the economy went to hell and everyone stopped hailing cabs. Then one could see 4 cabs almost run an unsuspecting black person over just trying to beat the others to the fare. That was off topic but too much fun to avoid.
Anyway, 10 minutes later he was still there getting soggy and looking a bit frustrated. As I have little self control and an overabundance of chutzpah I walked up to him to say hello and tell him how much I admire his work. He could not have been sweeter. Not just polite, but charming, affable, relaxed, natural, even humble. I felt a bit like a stage door Johnny, but he was such a normal human being.
What fascinated me most was his eye contact. He never took his eyes away from mine as we spoke. He lamented that he loves his work, but that it's exhausting. That was so interesting, because I believed him. I think the guy actually works and doesn't leave it all to assistants like Calvin did. I felt like I wanted to offer him a meal and a comfortable seat. We all know that his success and reputation precedes him, but nevertheless he was a first class gentleman. He asked me how my day and week had gone, what I did and how things were going . Very considerate.

My faith was restored to some degree. There are great celebrated designers in fashion who have held onto their humanity. Francisco Costa is an example for many.
Posted by Fluff Chance at 8:11 PM

A wonderful posting, not only does he seem like a true gentleman, but handsome as well.

The only person I ever manage to see in New York is Al Roker. Except that one time when it was Steve Tyler of Aerosmith (tiny) admiring the boa constrictor (huge) that was draped around the neck of this guy on Central Park South.

I'm sure Costa was so flattered to be recognized on the street. Despite (because of?) the lack of cab, you made his day!

About the cabs, this country has a lot of growing up to do still, despite the election of Pres. Obama. Why this should be when so many cabbies are themselves immigrants, I don't understand.

I'll admit that I have an insane crush on Francisco Costa, solely based on his YouTube interviews. So adorable. Loved your post.