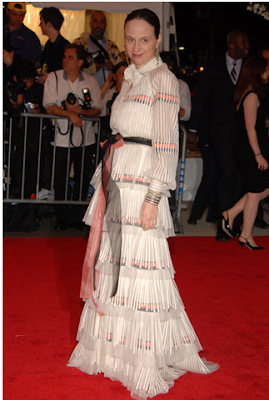 The big night where Anna waves her magic wand, works the velvet rope like a bouncer from the Bronx and anoints the pilgrims with her special brand of holy oil (cod liver) is only 2 days away.
The Costume Institute bash is about to erupt. The Model as Muse is this years theme. It sounds like one thing: the models who have been the force behind the creativity of the worlds most important designers since time and vanity began. That is intriguing when you consider how many movements have come and gone in fashion over the past 100 years or so. That is a too tall order, so something a bit more manageable would be easier on the eye, not to mention the weight and contents of the gift bags MUST be considered. Too much ephemera and they'll have to be in shopping carts.
I thought this would simply be a time line of the some of the most influential faces that launched many a ship, dinghy or inner tube , but it appears to be more than that. It sounds like more of a diving off point than the point itself. I was reading that not only will there be lots of images of the super models of long ago( Dorian Leigh, Lisa Fonsagrives, Dovima , etc) who inspired Dior, Fath, Mainbocher, Givencht and YSL, but also the more recent gang. Girls like Linda, Amber,Nadja,Naomi, Christy and so many other GREAT faces from the 80's and 90's. It seems that there will be lots and lots of fashion on display as the by product of these women's participation in the most newsy form of the creative process ;Faces as Fulcrums of Fashion.
There was a great piece in this weeks New York Observer. It focused on Anna's new/not so new protege, Alexandra Kotur. She with the name that had to come from Conde Nast Central Casting. It seems the physical and visceral layout of the show is from her very simply , coiffed head. There will be tableaux of many designers work connected to a movement and muses of that time. There will be historical references to women and clothing of great import. There will be a ceiling of suspended mannequins in looks to amuse and confound. All in a very sensory sensationally staged way. The piece on Ms. Kotur did steal some thunder from the circus which has come to town .Even though it's been curated by Harold Koda with assistance from Koehle Yohannen (who intrigues me more than the whole lot of them) the focus and credit was all directed towards this behind the scenes , hand picked Go-to-Girl of Anna's. They went to GREAT PAINS discussing how behind the scenes, under the radar,and publicity shy worker bee that she is. What I found contradictory is that Ms. Kotur, who has no interest in being photographed with the gals, or having her name mentioned in connection with the projects and responsibilities of her job is anything but off the radar. She is a very intelligent and creative force at Vogue.
She more than deserves the credit she gets and will get after the circus loads up and leaves town. What puzzles me is that they go on and on about how "old -fashioned " she is. A simple girl with a dream. Always in the background. A faceless, selfless worker with no interest in promoting her good works. Eve Harrington comes to mind; this dark, questioning mind of mine.The photos that accompanied the story were more telling: 2 or 3 dressed in couture(taken from the pages of party pics in Vogue and then one so self consciously staged of her on a bicycle complete with handle bar basket. The little shift she wore was so humble and the expression enigmatic. Come to think of it, her expression is permanently enigmatic. Sort of the strict look of a fashion Nun, a mix of Isabel Toledo seriousness and carefully controlled hauteur.

The minions love her in the office . Andre ,Grace and Hamish had only good things to say. She sounds like a real team player! She's after all an old -fashioned girl. But I've seen her in the pages of Vogue as one of the major players shot in amazing clothes at amazing venues for the last 3or 4 years. Shes photographed repeatedly with Marina Rust, Aerin Lauder-Zinterhoffer and Lauren DuPont; Society's Young Guns. (I have to say, that Lauren is my Beauty of Choice. I have to write about her because she embodies a very fresh, healthy attitude towards her unique position in life, her image is very natural and self effacing. She was once a market editor at Vogue editor possessed of the best manners of them all and is really much more off than on the radar.... but I digress.) So what's up with the reshaping of history? None of this matters, honestly except it's so typically and patently sort of not really exactly FACT. Fact finding is a very essential job at Vogue unless it concerns the staff.
This is a perfect example of Alchemy at work in this laboratory of mad scientists/editors/designers/hacks, you name it. One part Puff, not Fluff, 6 parts gratuitous clap trap, and a little arsenic to taste and you have a full blown Souffle a la Conde. Looks good. Smells good , but think twice before you taste.

And for those of you who might find my attitude on this matter catty, and wonder if I intend to attend the Gala, I stopped attending when the price of dinner was higher than my rent. I was forced to choose between a plate of mutton a la muse and paying rent on my 5 room parlor floor of a 250 year old brownstone in Brooklyn Heights. You do the math.
Call me parsimonious and small minded. I'll cop to that.
Posted by Fluff Chance at 10:28 AM