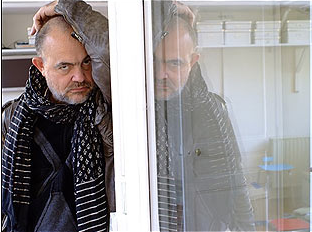 The headline read that Lacroix has filed for the French equivalent of Chapter 11. This, a day after I had had a decidedly depressing reality check. I've grown used to the weekly news of one or another company hitting the sidewalk face first. This news was a misprint...it had to be. When you factor in the European fashion houses that have been the examples of individuality, masters of Haute Couture, household names and the pillars of this business, Christian Lacroix has been in that rarefied group since the late eighties. That doesn't include the years he shook the establishment and the world with his brilliance as the designer for the house of Jean Patou.
His first major contribut 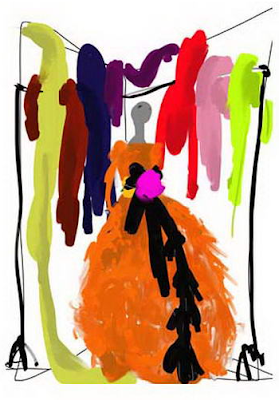 ion came with the modern version of the "pouf". It's volume and over blown effect was synonymous with the times in which it emerged. The world and this country were on a roll. Remember the Steinbergs, Saul and Gayfryd....the prince and Princess von Thurn and Taxis....Henry Kravis and Carolyne Roehm.....Bill and Pat Buckley,Nan and Thommy Kempner,Georgette Mosbacher, Anne Bass, Harriet Deutsch and on and on? These were some of the go getters in New York and internationally who personified the richness of the 80's. My god was it rich. Park Ave. was a boulevard of Bucks in a way it's never been since. Lacroix was the uniform of choice for those Ladies .He was the envy of Valentino, SainLaurent, Dior, Givenchy, Blass, Oscar, all of them. He struck a heavenly chord which no other designer at that time could play no matter how perfect their Piano.
When he left Patou to open his own couture house the world was lining up. There was nothing less than promise. The eccentricity that was born at Patou became something richer and more fully realized under his own name. I'll never forget the utter grandeur of his muse and most important model Marie Seznac, she of the silver grey hair who would later become the Directrice of the house. Every confection she showed was m

ore startling than the last with a riot of detail, color mixes combining shades and hues straight from old master paintings. You'd see Goya or Winterhalter in a mix that seemed like madness but was so brilliantly controlled. The couture that Lacroix introduced was at once totally modern and unimagined . It hearkened to a time from the past but at once was totally modern...one without rules. Granted, it was for many an acquired taste , but something impossible to ignore. Impossible in it's ability not to seduce. Our eyes were forever changed.
With the new house came the ubiquitous perfume which did poorly and stresses mounted with the parent company LVMH. One thing led to another in the miasma known as Corporate. His house was sold to the Falic Group, a Texas based company whose DNA couldn't have been more alien to Christian's. But they moved forward despite that unfortunate shotgun marriage. Lesser priced collections spun off such as Bazaar and Christian Lacroix Jeans. Why everyone thinks jeans are the great pot of gold I have never understood, but there you have it.
It is not an official end to the house as there are suitors in the wings, but the Couture collection scheduled to show in July is in question as is a Spring 20010 collection. With a court appointed trustee one's future is not one's own. Others at this point call the shots. That is an ugly reality that can not be underestimated. As much as there is a future and desire in the public and the House in particular does not hold sway over a trustee. That person's decision is the rule of law.
With this in mind it is a very precarious and sad situation that the House of Lacroix must come to terms with. It has only rarely broken even or turned a profit since 1987. This is a documented fact which does little to bolster his chances of survival. He has always struck me as a realist and a very grounded man. I can only think that this turn of events is viewed by him as an opportunity and not a death knell. Opportunity has always come to him and there is no doubt that it will again.
Christian Lacroix may be 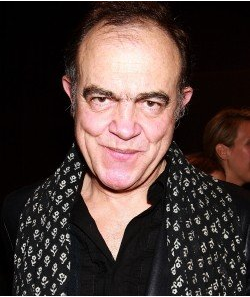 one of the highest profile designers to be affected by this economic tragedy, but his example which will be one of humility and grace is a lesson to all who may find themselves in a similar predicament. One step back makes for the possibility of 20 steps forward. One must only believe and have faith. We are not our businesses and our businesses do not define who we are and the value of who we are.


I hope and believe that the future is a heartbeat away for him and for the rest of us who are on similar journeys, though they may not have been journeys of our choosing.
Posted by Fluff Chance at 7:30 PM

I figured there was trouble when I saw a giant pile of Lacroix scarves at Filene's Basement last month. Not great quality ones either, which I assumed meant he was pushed into sketchy, though maybe lucrative, licensing deals. But I'm really sorry to hear this news because he's a true talent with bold ideas.