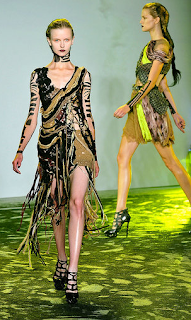 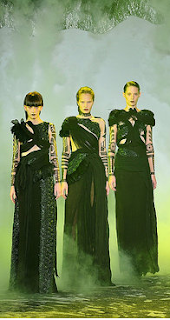 Death Valley. Kill or be killed. Tribal fashion warfare. The dark forbidding lands beyond New Jersey. Oh, and war paint..... The line has been drawn in the desert sands and it's about the apocalypse. The Goth warrior princess Sheena, the she hellion, and her handmaidens are playing dress up for we mere mortals.

Well I for one lay on the floor of the taxi all the way home and immediately locked all windows and doors. I still don't feel safe and am sure not to sleep tonight or any other for that matter. The Mulleavy sisters need to come back to civilization. They are becoming feral cats , more dangerous than just designers. The vision they see for Spring 2010 is filled with the remnants of a civilization no longer in existence. It is a scavenging wonder in the guise of dressmaking. 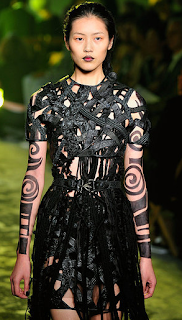 I saw the influences of Madame Gres, John Galliano and Ralph Rucci. So many techniques were employed that remind me of these legends. That is not meant to diminish what they do, it's a compliment to their ability to draw from the past and present to make an aesthetic all their own.What troubles me about Rod 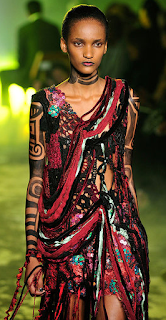 arte is that these clothes are almost impossible to build a business that appeals only to the most insider of audiences. To construct these clothes for retail will be an exercise in frustration. Unlike Rucci whose clothes are absurdly complex there's a symmetry that makes the mathematical question solvable using a clear logic. Their most compelling and wearable pieces employed leather bands to create a fantastic web. Strands of rope fringe hang from under the bodice and are caught with a belt at the waist.

The frustration I felt watching one exit after the other was the sameness that eventually deadened my mind to what was coming next. The idea of costumes and one of a kind looks felt like Imitation of Christ at it's most ambitious. It takes a clever imagination, which is doubly rich between the sisters, but

ultimately has little to do with a world looking for clothes that have multi purposes. The most obvious one are clothes that are wearable with staying power. These designs are clearly editorial looks and not meant for repeated use. Once seen, they have little that lends them to multiple wearings. One black evening gown which feels like a deconstructed Gres is one of the most beautiful seen on this season's runway. It's haunting and elegant and totally captivating. I wish more of the collection had it's weight and mystery. The single most wearable piece is a black pant.

I'm befuddled when I think of the deal they've inked with Target. Why would Target choose such limited , specific designers who resonate most clearly with a customer who rarely walks through those doors. Their notoriety and popularity is off the radar of the Target shopper. Isaac Mizrahi, they aren't. Jacqueline Smith, they will 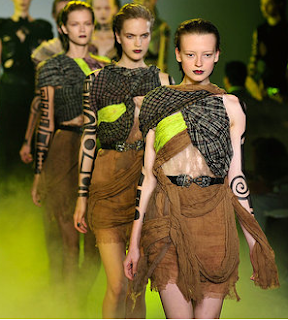 never be. So what do they bring to the Target table? It has to be the most diluted and derivative clothes that only resemble their own collection by way of the label that will say Rodate for Target. The clothes will have to be completely different and dumbed down to sell, if they sell.

I applaud their attempt to broaden their reach, but it's unfortunate that it will come with restrictions that will most likely not allow them to use their own voices. The money they will make to feed their eponymous collection is an end unto itself. Schizophrenia in design is a high price for two women who have steadfastly stuck to their guns, or in the case of this collection, their spears.
Posted by Fluff Chance at 4:19 PM

Great post. It's not often that I'm frightened by a fashion show but this one had me quaking in my booties and I wasn't even there. Talented? Yes, absolutely. More than a little bit out of control and not in a sexy way? That too. I think they've got themselves in a corner.

close your eyes and picture t shirts printed with the complex layering and patterns..picture jewelry that mimic some of the tattooing..picture the deconstruction of the pieces into separate pieces, skirts, tops and dresses that can be worn alone or layered...picture most women over 30 still not wearing these items unless they have a S&M vibe going on...

I do love their imagination and their work and the way they seem to be unspooling a design vision season after season. But I'm with you -- it's not the first time I've thought, "Sooooo... do they just plan to sell five of those dresses and that's it?" And they don't even have $800 handbags and $400 sunglasses to plump up their balance sheet -- although perhaps that will come soon.

After Reading your comments on Rodarte, I re-read your comments on Chado. You question their ability to translate their vision to Target. I say Chado would have the same problem. Visually, his are not as challenging to the consumer, but like Rodarte, he too is an insider favorite, coveted by a generation of women who can afford his clothing. If he inked a deal with a mass-market brand, the lightness, quality, texture and tailoring everyone adores in his collection, would certainly not be there in the lower price collection. If anything, the Rodarte sisters could translate their vision through prints, crochet or some other variation of their designs. Fashion should challenge the consumer, we have a enough dumb-down fashion in the market place.

does anyone really buy the clothes? It would take all night just to figure out how to put it on!

well. if i could afford too...i would buy their clothing. i know a lot of girls who would too. i guess the key word is afford. trust. i could totally rock this stuff and make it look wearable. i applaud them, because you know what? i don't want to look pretty a lot of the time. i want to look dangerous. cute and pretty get a girl nowhere!

When I saw this today I was like, WTH? Maybe this is their take on artistic expression, but no way is this wearable. Gothic ladies, yeah, but everyday? Not! I'd be afraid to send this to the dry cleaners.

Your post was right on...highly gifted women with a mis-placed market. I'll call this the recession collection..
At the end of the day how will the pieces translate on 20 somethings?
What about the larger than life demographic of the boomers?
somebody's missing the point.

I think this Rodarte collection is bullshit and everyone is afraid to say it because these women have such a PR-created cool factor that one wouldn't dare appear uncool for saying these emperors have NO clothes. Bullshit, bullshit, bullshit. There.