Ultrasuede: In Search Of Halston Part I 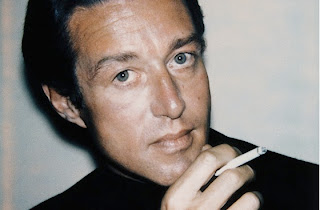 Last night's world premiere of the Whitney Sudler-Smith's documentary "Ultrasuede: In Search of Halston" was obviously a much sought after ticket. It was a fashion happening when you consider the cast within and without. Andre Leon Talley was credited on screen with having made the film possible along with a several designers, celebrity clients and people from within Halston's inner circle. Andre Leon Talley and Ralph Rucci were the most articulate voices on screen in their efforts to define the designer Halston. It seems his greatest achievement in the end was his creation of a modern, minimalist luxury that has defined the American fashion aesthetic in a similar way that Yves Saint Laurent's maximalist luxury has defined the aesthetic of the French. Ralph, who had been an assistant creating toiles before opening his own company, describes a moment when he watched Halston cut into a bolt of silk chiffon with out a pattern. In one fell swoop, he cut out a bias dress that fit the body perfectly. His talent among many was his ability to see things in 3 dimensions. Halston was a master at creating shapes using 1 seam, patterns that were truly examples of Origami, spiral seams that made dresses and gowns "cleave” to the body in the most sensual way.

These and more stories of his creativity and rigor were shared by Ralph and Andre but also by Liza, Pat Cleveland and Cathy Horyn. Liza wa 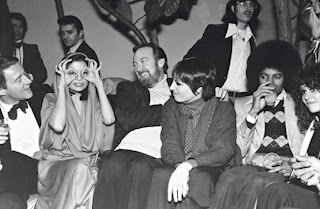 s the most eloquent and earthy of the group when she spoke about her friendship with the man and his constant support, attentions and loyalty. She instructed Whitney early on to really search out the story that is Halston and not get sidetracked by the gossip and lurid 70's stories of excess and debauchery, which have become legend. As unguarded and straightforward as Liza was on camera, she was strangely vague and disingenuous when asked about the wild nights of sex and drugs at Studio 54, their living room away from home. Her responses of never having witnessed anything untoward and that Halston remained always by her side was 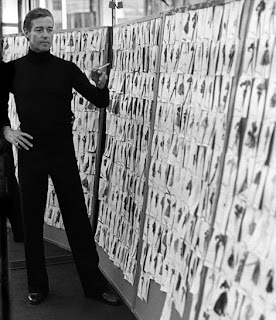 starkly contrasted to the memories of the DuPont Twins, two balding, identical, party addled 50-somethings, who'd been at the center of the party back when it was at its height. Their memories were more plausible, when you consider two heads being better than one, even if those two were so stoned they probably don't remember how they got to 2010 from then.
Whitney, the director was an unsettling presence in the film by having created for himself a persona for his job of documentarian. He was a pastiche of Gator McCluskey (a trashy Burt Reynolds character) and a corny Travolta styled Saturday Night Fever extra, jumping in and out of a cheesy Trans Am with an array of different hair colors, hair cuts and over sized aviator sunglasses and truly heinous suits of the leisure sort. This sight gag immediately skewed the tone of what should have been a serious effort to one that was coy and smirking. Andre Leon Talley, in PURE ANDRE form, set him straight on a number of occasions, to stop interrupting, that he was not there to teach him the history of fashion, to listen and learn, to tell his camera crew to behave and on one occasion complimented his research which was scant much of the time. Whitney's ignorance of Diana Vreeland was a gaffe that created an audible gasp throughout the theater...... In time, he seemed to cool his silly, "I'm just a straight guy doin’ this film so I can meet some models and find out about the parties", and became more investigative. He seemed clueless that this was a truly American story playing out in the unbound 70's where the creative Homosexual elite ruled all things related to Style, Fashion, the Arts and to a large degree the highest levels of soc 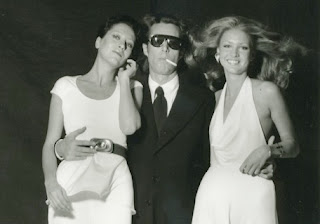 iety. Sexual freedom and the alcohol and drug taking that fueled it were just a fact of life. Ralph laid that out succinctly and clearly in an effort to eliminate further attention on that fact versus the facts of the creative output that was rich and life changing. I was most impressed with Ralph Rucci's guileless delivery on what this giant of a man meant to the culture of those days when he was at his apogee up to today and the legacy that is almost a vapor that shows only when the light is at the right angle. Like "September Issue" was supposed to be all about Anna Wintour, "Ultrasuede" was more about Ralph Rucci. Ralph Rucci is possessed of a soul and a mind that is extraordinary. He showed himself to be a realist in recounting the times and did an incredible job of explaining what drove Halston to his brand of perfection. Andre Leon Talley dovetailed with him in his ability to place Halston, the designer, in the pantheon of creators who shaped the way fashion has evolved since then the enormous influence he had on the way women dress.They both went a long way in crediting Elsa Peretti with collaborating with Halston to create this new vision of a modern woman. I wondered where she was in the film, though Andre said early on that she would not necessarily be available to Whitney. She wasn't. One got the distinct feeling that she didn't suffer fools or film makers who didn't do their homework. There would be no Calvin, Zoran, Ralph Lauren, Donna Karan or Ralph Rucci (and that's just on this side of the pond) and on and on had it not been for the stone path he set so carefully in place. 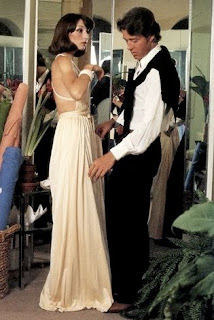 So much of the film focused on exactly what Liza with a Z cautioned Whitney against. At times, it might have been a made for TV film on the glory days of Studio. Though some of the most amusing characters were interviewed in these moments. Christopher Makos, a great photographer then and now was disarmingly glib and direct about all things lurid. What was telling was his difficulty in staying focused on the camera. Every time the phone rang, he answered it. It was as though Halston was a chitchat subject, no longer worthy of serious thought or attention.

This same disrespect for the subject and the film crew happened again and again with others like Georgette Mosbacher, the owner of Borghese; a big, bloated Republican southern belle, who stormed the gates of 70’s NYC society. Her assistant was constantly shoving a cell phone in her face and harping on her busy schedule, a complete disregard for the camera crew there doing its job. When Borghese bought Halston, Georgette re 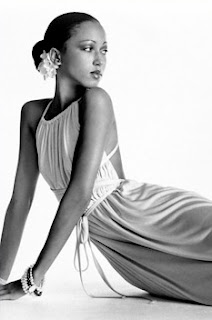 ceived the bulk of the archives of Halston’s 30-year career, which came in about 60 boxes and countless garment bags. This consisted of mountains of technical information, patterns, sketches and boards which held whole collections sketched by Joe Eula, Halston’s Illustrator extraordinaire. Contrary to what we might have thought Of Mrs. Mosbacher, who lived and breathed fashion, her answer to where this trove of priceless work and records of his career should go was not to a Museum like the Metropolitan or some other important institution that would house it carefully, preserve it using the most advanced archival techniques, or even something close. She dumped it all into an unlocked closet off the side of a classroom at the Lipscomb Bible College, a hot bed of fundamentalism. That’s the equivalent of sending it to the dump. That careless, callous act spoke volumes about her self-serving greed and colossal ignorance. I hope the crew in that theater who are her pals saw her/their values for what they are, mangled and dangerous. I’m sure most of that stellar cast seated in the audience was hoping to be seen and n 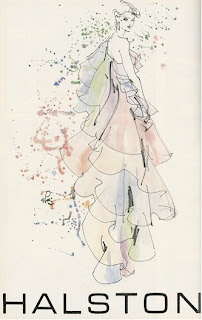 ot have to look at themselves and what little their lives stand for beyond style of a certain stripe. When more than one audience member asked questions about Halston’s Legacy at the panel discussion afterward, the facts were unsettling and a statement on what the world at large and the fashion world, in particular, have become. It is akin to a gorgon that chews up and spits out all that comes within its reach. Artistry, genius and visionary women and men have little value. This culture reveres little except the next bit rolling down the conveyor belt. 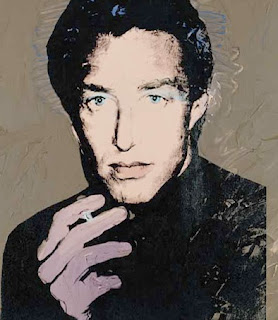 I made the statement to the panel that I was appalled at the resting place of this archive and the message it sends about this country’s values and priorities. I wanted to go on and ask why there is so little attention paid to people like Geoffrey Beene and other designer’s whose brilliance shifted the way designers approach the problems of a new aesthetic. I also wanted to ask Ralph Rucci how Halston conceived and shaped a collection. What were his methods? I didn’t want to monopolize the microphone, so I took my seat with those questions roiling in my head.

I am also appalled. That is sickening.
The designer AbbiJane Schiffrin was a friend of mine. Her friends and clients loved her, and there is a Facebook page for her, her invitations and show pictures are posted,

and her best friend has arranged for Parsons to start a collection of her designs. It isn't hard to do, or expensive. If we can do this for a small NY designer, who is now gone, why can't it be done for a major NY fashion designer? Disgusting. The people who loved him must get off their butts to make sure that he is not forgotten.

Though I haven't reach the age of 20 yet. I can say that Halston was one of the greatest American designers of our times. His gowns were beyond gorgeous and always made a women looked beautiful. Nice blog btw.

Your comment about whatever is coming down the conveyor belt next is true of all aspects of (what passes for) culture right now. Chew it up, spit it out and NEXT!! It's time for a revolution people!!

TOUR DE FORCE!
I wonder when will get your own column, it is seriously overdue.
you are a tornado of fresh air.
I am so shocked by all this, horror.
you are my inspiration and I dream of being able to put my thoughts so eloquently into words.
As a German in her 20's, I remember the name Halston being the one and only we really admired over in Germany from the US, at least in my family.
how this great image and body of work could end up in such a mess is inconceivable to me.

uch, cretins. This scene sounds two deep breaths away from to-the-hilt social skewering, Fluff. You've got the brains and the background. Be our fashion Swift, baby, or at least Wolfe on a very good day!