Walk on the Wild Side: The Ho Diaries. 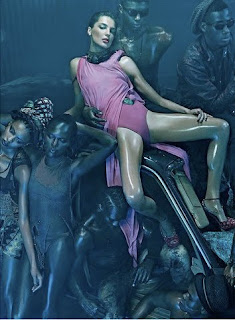 Well it's Interview magazine's turn to play the race card and shoot another tasteless, idiotic spread using Super model(?) Daria Werbowy and a tribe of black back up stand-ins to tell a story of sweat, lust, heat, desire, sweat, heat, lust forbidden fantasies , oh and heat and lust, whatever, you get the picture. And if you don't , save your hard earned money; I'll show em to you. This story is as repugnant as the previous ones that appeared over the last 2 years in Franca Sozzani's Italian Vogue with the help of Steven Meisel.
Ms . Werbowy plays lust ravaged Jane to a slithering swarm of moisture coated, charcoal blackened, sexual vampires in what looks like a used car 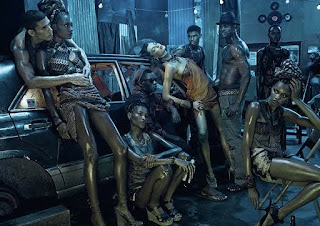 repair station. The only used car appears to be Ms. Werbowy and boy does she look like she's in for multiple oil changes, lube jobs, and detailing. You can almost hear her hiss, "Young man, I think you missed a spot!" The story is so stilted, absurd and the obvious fantasy of some infantile white "guy" that I would laugh if it didn't piss me off so fundamentally. To see these really extraordinary models of color, not all are black, I'm reminded of the rich and beautiful faces and bodies in the modelling world beyond the the army of the colorless. The fact that they play the roles of props, "Blackcessories" as one person so aptly phrased it, sets the "star" of the story is seamy, steamy, stark relief. There is a mood of wanton, beastly sexual hunger between the men and women, the w 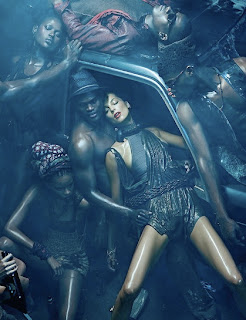 omen and women and of course everybody be wantin' some a dat fine Daria deliciousness...... That is a tired photographer and stylist's concept of "Blackittude"( ALT, thanks for the inspiration!). Dumber still is the one note pose of this mode 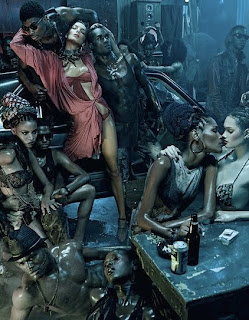 l; all pelvic thrust, legs spread and eyes rolling in the back of her head. She is forever in position like a mare in a breeding station.
I guess these wise and knowing editors and stylists know something that we don't. This Mandingo madness, the ignoble savage having his/her way with the sacred innocent is just too good an idea to put to rest. Well I'm over it. There's nothing more offensive than these sorts of images whether shot this way or the opposite. It's degrading, false, insidious, crass, tasteless, sophomoric, insulting, impos 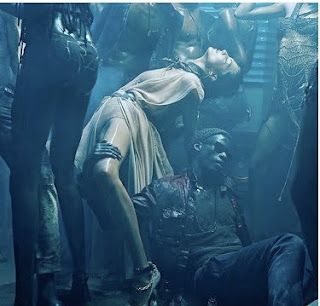 sible, old school, and just dead tired. I didn't see any guys so hungry they were ready to do the nasty with each other,like a few of the women.....also unrealistic and homophobic.
It's a Ho down and da Ho in this instance plays against type in that she's gettin' all the pay and everybody else is gettin' a couple a beers, some axle grease smeared all over them and a nice long break until Italian Vogue is ready for their next Minstrel Show!
Posted by Fluff Chance at 1:53 PM

Editors need to wake up to the implications of their photographs. Sometimes I wonder, can they be so ignorant that they don't see? Of course it's visually striking to have loads of black models in the background and a white girl in the middle, but what are you saying? It's like Vogue's King Kong cover. Seemingly impossible to miss, yet they did.

"Blackcessory" is the word. This could not be more offensive, and I'm not even black. Makes my skin crawl to be honest. Thank you for being one of the very few journalists out there who has not yet sold out. Keep on keeping on.

Perhaps its just bad photography. A lack of originality, a lack of taste. And, sometimes, a need to get a shocked reaction. The Italian Vogue hoopla was a mystery. Tyra Banks spoke of how it vindicated black models, how black beauty sells, etc. Odd: I haven't noticed a rise in black model magazine covers.

Ditto! I was in the bookstore looking through a French Vogue and I swear I thought that I was looking at a Playboy magazine. I know Europeans have a different take on nudity and vulgarity, but what happened to the fashion shoots of old? I was looking through some older issues of L'Officiel that I have and these photos are real fashion photographs worthy of framing. When I see these ridiculous fashion editorials my mind often wonders whose idiotic ideas are these? There's nothing artistic about any of them!

From a white woman's point of view: why is all we are good for lying back and thinking of England? Why can we never have power, never even stand up?

P.S. I agree with the rest of the outrage in your article. Just wanted to point out that everyone, really, is demeaned.

remember those paintings j.j.walker supposedly painted on "Good Times"? yeah, those if done by george wallace. also, how in the hell was this idea pitched to the black models? ugh. AWK-ward.

Now THIS is a train wreck.
Perfectly horrid and I despise any company who advertises and supports this stupid rag.
Makes me wanna upchuck.

No, no-- you see, it's a brilliant way for the photographer to distract from the fact that the central model is apparently the tragic victim of Total Body Paralysis (she is in the SAME position in nearly all photos shown).

--or No! No! It's one of those visual acuity tests where an object is presented in a series of frames immobile but rotated-- or.. or...

Oh, I give up. It's thoughtless dreck.

When people have no talent, all they have left to sell is shock. As I said before, it's time for a revolution people!

I am not one to not call out racist or racist-like attitudes, actions etc, and although I see your response as legitimate, this to me seems least offensive as oppose to black face, or the general lack of one black or non-white looking model in the Chanel Resort collection. I thought of Janet Jacksons video for Got til its Gone set in that raga style reggea dancehall where people get sweaty and literally bump and grind motions have exhausted its dancers. Being in a inter-racial coupling, how does your partner feel in regards to the pic? Unlke ther French Vogue editorial 2 years ago with the black french made story, I agree that we are sometimes used as exotic blackcessory. Are we becoming to sensitive in this new culture with Tea Party activist riling up passions? Is this objectification of white women by black men and women, the black doll versus the white doll? Having just been on FI, I know racism is live and well in the Pines. As random as this string of conscious may seem, I wonder if we are all overly sensitive.

I actually think to be fair Franca Sozzani has been one of the most progressive editors in the fashion establishment to push for the usage and promotion of black models. She is also the largest employer of black collaborators amongst all of Conde Nast. So I think criticism of I.T. is quite unfair.

I mean to be frank - that is the most black models that we have seen in a long time in one place. Probably more than have been in American Vogue in recent times. LOL!

The issue here is that Black Culture has been Ghettoized and this is not only the blame of the establishment. The whole debate is frankly tired on all fronts. There are no good black magazines - they are all badly art-directed with shit photography. All reaching for the same old cliches.

On the other side, are American media, advertising and fashion giants pushing the usage and promotion of black models and black culture into new directions? No!

I think there is a bigger debate to wage about what is going in in the corporate world, rather than that against Sozzani's Vogue - which to be fair is a small magazine within the Conde Nast stable - its success comes from Ads in the big editions.

Just think how spoilt we have become in a world with I.T.? It has become second nature. Imagine a fashion world without it?

America which has the bold black generation is not taking that energy into a new direction. Yeah you may see a few black faces in a Tommy Hilfiger ad, the new music video, or even the denizen of black fashion culture America's Next Top Drag Act - but who is defining the new movement forward? Nobody. The black side of the coin is getting invariably tired too, there we see the same old performances.

I just id research for a film shoot and as I was looking at "high-profile' fashion ads, i was repelled by noticing of how much discrimination and ignorant upkeeping of homophobic, misogynist and pure out sexiest stigma is happening.
so glad to find this blog and see there is a counter opinion out there.