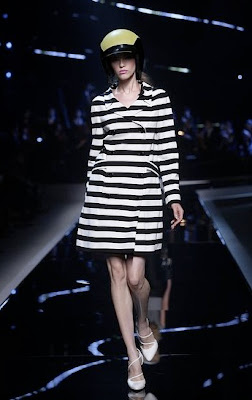 Sounds romantic. A journey to an exotic locale filled with the promise of intrigue, adventure, perhaps a little tryst, and an overlay of savoir faire. Galliano and Toledano (nice ring, non?) commis 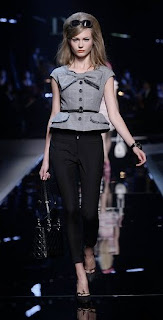 sioned David Lynch to create a tiny film again with their cinematic muse, Marion Cotillard which would set a franco-chinoise mood for the show. All that was requested was that it be set in Shanghai, show the Pearl Tower (so gloriously dramatic and aesthetic) and a steaming romance, and make sure to highlight Le Bag "It". Otherwise, whatever. The film is charming and very Lynchian. Cotillard is lovely, even though she appears at one moment to pull away from her Homme de Chine while holding fast to his arm. That one little detail had my tighty whities in a twist for some days. How does one pull away while holding fast? But that's fashion .... one big unexplained contradiction. It's why we like it and why it's such a perfect fun house reflection of life.

The best part of this whole adventure is that Galliano created a Cruise collection that was actually very approachable, varied, and of this time. There was, for me, so much to like. I'm not saying that I liked it's commercialism, though it is, but 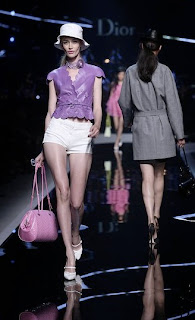 there were really great pieces that were cool, beautifully made in rich fabrics and great graphic stripes (I've never met a stripe I didn't like). He used degrade chiffon fabulously draped and other degrade effects in crisp organza that was knife pleated to death. Also, lots of deluxe sportswear that was both sexy, a little arch but totally unfussy. 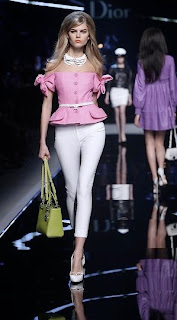 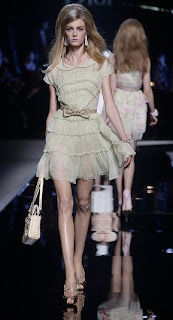 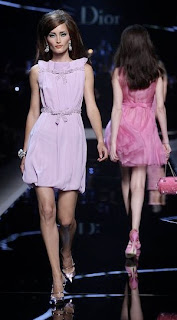 The overall look was a a very current take on Christian Dior's bar jacket (Galliano has an obsession with that shape) but with a nonchalance. Some were simple numbers with constructed, rounded hips, while others were strapless over sleek capri pants. They all felt girly, sporty and sexy. Lots of teased, bouffant long tresses overstated this very popular style of the moment. I don't want to dig up the Mad Men adjective, but that's where it appears to derive. Marco Zannini's version for Rochas this season still resonates the strongest for me, but that collection and this one are like tangerines and Pomellos. Dior is definitely the BGOG (big girl on campus). There was so much variety in the collection it felt as though Galliano had taken some

down time, perhaps a spa or a rest cure by way of a private clinic. Everything was so clear and coherent....Great jackets, coats, a suit or two and fantastic day and evening dresses paraded down the runway like well drilled soldiers. There even seemed to 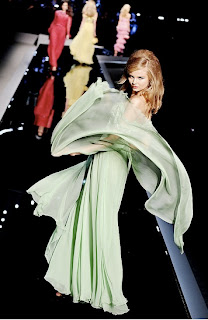 be a bit of a loosening of the de rigeur march. Some images looked like the models were exhibiting a freedom of movement that reminded me of the 80's and 90's when a model's expression of her personality was encouraged. Leather was scalloped along the edges in a short j

acket over pants and the same treatment appeared in a short dress. Cocktail dresses swung between tailored looks to liquid draped chiffon numbers that referenced the 60's and still looked of this moment. The workrooms at Avenue Montaigne must have been in a state of high excitement putting these pieces together. It was a runway full of their brilliant technique let loose. Draping, intricate layers of pleating, razor sharp tailoring and sweeping languid chiffon, twisted and ruched in evening gowns in a myriad of luscious colors were a veritable feast.

The sensibility of Dior's couture heri

tage and it's influence on 20th century style was acutely evident in this collection, which I think will re-interest clients, refresh editors and re-invigorate retail businesses who've grown weary of the self indulgent tangents that have all but consumed Galliano over the past several seasons. Granted, the accessories have continued to perform like trained chimps, but wouldn't it be nice to sell some clothes beyond just lending them to Jill Zarin on Housewives of New York? What is it about a Cruise collection, almost a step sister collection to the main events of Spring or Fall that gives the designer and the audience something of true substance, artistry and viability? I don't want to jinx it with too many questions, but it was a welcome surprise. It's always comforting when a person teetering on the edge of the abyss steps back from the ledge to the safety of some new and yet to be discovered precipice.
Posted by Fluff Chance at 8:50 AM