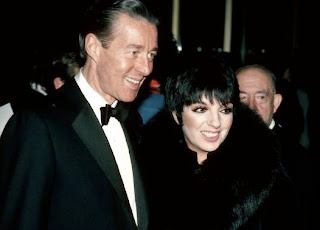 This film has stayed with me the whole weekend after having seen it on Friday night. That's usually the sign of a good film, but in this case I'm not altogether convinced. The things I can't seem to let go of are not the moments of beauty or enlightenment. I can't let go of the irksome images and interviews with people within Halston's gravitational pull, or not, who took the film hostage, much the same way Whitney insinuated his way into the narrative like an unwelcome guest. I was also stymied by the absence of people like Bill Dugan, Halston's right arm, and Faye Robson, his Personal Assistant for many, many years at the Olympic Tower and a member of the entourage on his legendary trips. Both these people are very much alive and founts of information. It seemed deliberate that Sudler-Smith ignored these experts on the subject of Halston. The premise of the docume 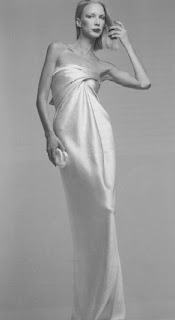 ntary, a search for the man, was more a clever tease than an actual mission. The film in the end seemed more of a vehicle for the Director to gain entre to a party long over and ingratiate himself with some characters who brought little to the table.

There were moments where the footage of Halston at work, his presentations at the Olympic Tower and entrances at Studio 54 that were riveting. The glamor and larger than life quality of that time dwarfs similar high voltage events of today. The fashion elite at the premiere were like a hollow shell in comparison. Nubile, leggy beauties in impossibly short dresses mixed with the likes of Deeda Blair, easily the most compelling and chic woman there that night, dressed in Chado Ralph Rucci Couture, who was cheek to jowls with the hopefuls and the 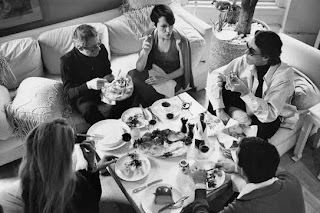 hopeless. The crowd outside waiting was primed for the photo op. Packs of women of a certain age and social standing were identifiable like tagged birds. Their faces were 20 years younger than their bare arms and all were herded to the best possible seats by their shepherd Boaz Mazor of Oscar de la Renta. He played the part of keeper of the keys to the V.I.P. section. Mario Buatta, the decorator, Kenneth Jay Lane looking so impossibly weary of this world, Women in their Oscars, Chados, Diors,vintage Halston as well as reconstituted Halstons , all air kissing in a nice tight circle while others watched from the side lines. Linda Fargo of Bergdorf Goodman was seated with NaeemKhan, who we learn in the film started his career in design as an assistant at Halston. What was downplayed was his father's beading concern in India which most likely supplied the intricate beaded fabrics that was so much a part of the Halston oeuvre. That detail was also lost on the cutting room floor. Fern Mallis and Jeffrey Banks were two swe 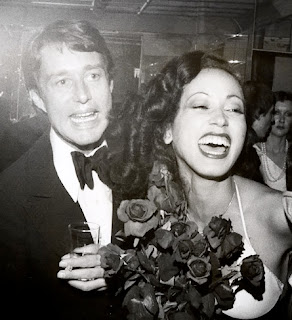 et,knowing faces in a sea of predatory fish.

Whitney spent an inordinate amount of footage on Bob Colacello of Interview magazine and Paul Wilmot, the very successful P.R. man. They both recounted lots of stories of the Reaganomic sort that had little to do with the man and more to do with their places within that time frame. Nancy Reagan would appear with her famous "Just Say No" mantra, which obviously Halston and the rest of the country neither heard nor heeded. There was a shot of her in the White House in a white Galanos which didn't make sense in the overall scheme. Boaz coyly takes us on a tour of Halston's home, alluding to the fun that was had, and all of it implied as naughty. His big revelation was that he was photographed in a Levi's jean jacket before he even owned a leather one. This comment was meant to elicit awe and incredulity from the audience. It didn't. Nothing that was stated did 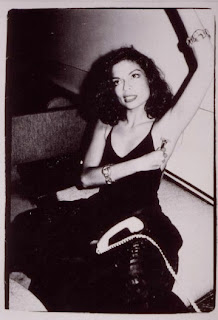 more than tickle. It was as though the truth of the man was either unknown or a secret that would remain so. His appearance like Amy Fine Collins' was one of the many disconnected tangents that shed little light on the mystery. It was the equivalent of roll-over minutes of fame for them.

The footage of Halston and his models was magical but in surprisingly fragile condition. You can't believe how haphazardly stored these images are like fantastic albums that are covered with dust and scratches. The film asked many more questions than it answered. It will take another more scholarly approach for us to understand who Roy Halston Frowick was. The people left out like Elsa Peretti, Bill Dugan, Faye Robson and others of his friends and models have those answers. Pat Cleveland might have if she had stuck to the assignment which was to shine the light on the man. Instead, she, like the moth she claims to be, was too busy flying into the light, or match, which was meant for him. Her cloying, self absorbed star turn was one of the most annoying moments in the film and at the discussion that followed. 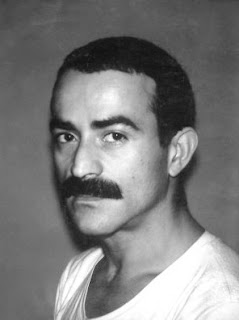 r and dark side sidekick is credited with being a huge influence on his life and work. The windows of the Madison Ave. boutique were largely the brainchild of Victor. They swung between the sublime and the sordid, but always made an impression that would influence the aesthetic of many of the most important window display masters to come. He is also charged with orchestrating and conducting Halston's slide into addiction and ultimately his dea 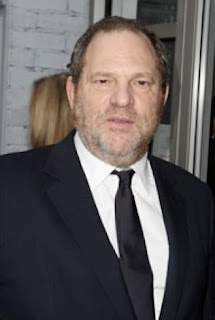 th. This is mildly and cautiously explored by people like Ming Vauze, a charming and clearly knowledgeable survivor of the entourage who was a close friend to Victor with an intimate proximity to Halston. Whitney treats him as more an oddity than a valuable source. Yet, another wasted opportunity.

This was no "Valentino: The Last Emperor" or even "Unzipped" as far as a film that both elucidates and educates. It was more the "Love Boat" without the Star Guest of Honor and 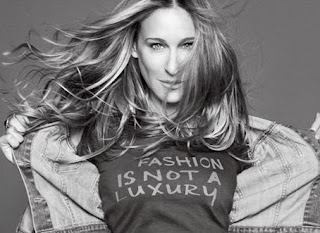 What we're ultimately left with is the unsavory fact that the company has passed through the hands of too many to count not mention at least 4 Creative Directors.
It now belongs to Harvey Weinstein who has already burned through a few Creative Directors, as well. The most recent hire is Sarah Jessica Parker who is uniquely qualified to act as Creative Director for the new secondary line. I, for one, am worried.
Posted by Fluff Chance at 11:33 AM

cant wait to see it!!!!!! i am rediscovering ultrasuede for spring 2011. thnks for sharing eric!

The problem with the Halston line is the idea that you just buy a brand and then you fling a few creative directors in - and VOILA! Instant success. Fashion has lost it's bloody mind and this is why in the end it is going to turn people off! Which maybe a good thing maybe as one industry head has said "maybe fashion needs to be out of fashion for a while"

SJP is no authority to do anything and she should leave it at that.

Everybody is soooo fast to say everything is wonderful. I remember the days when the Lagerfeld's, Alais's and Beene's of this world shot from the hip and told it how it was. 600 International shows and 570 are just rubbish.

Now this Ungaro nonsense. The first thing that needs to happen over there, is Abdullah needs to sell it back to either the Ungaro's or someone with a knowledge of how to nurture fashion.

Look at the Taiwanese at Lanvin - bought the company and their first port of call was Alber Elbaz. That is the kind of stewardship fashion needs. All these silly hedge funds and venture people messing up fashion. This fad needs to stop.

The only way it will is with unbridled creativity. You don't do fashion because you wanna be famous, you do it because you love it, and you stick with it even if people hate what you do. They say Alaia is a genius today, that success could of happened years ago!

All these Mega talents got to a strange place - sold off names, law suits and bankruptcy. Fashion needs to respect designers and stop all this crap!

Start hiring the right people for the job. Now Ungaro - I see Nathan Jenden via DVF, but Deacon I don't see it. talented yes - but Ungaro! NON!

sounds like a real cocktease of a film, enticing us with glimpses of the overzealous hedonism of the era but neglecting any effort to connect it to halston's drive and inspiration. victor hugo's creativity was unfortunately overshadowed by the omnipresent insinuations that he was only given attention due to being lover's with halston, well, that and his infamously enormous member. after halston's death, i always felt he was a man lost without a legacy. also his accent made it nearly impossible to understand a word he said. ming vauze, benjamin liu, was also warhol's assistant (which may be in the film) and i have to say he was a fierce drag queen. mario van peebles would carry him on stage and benajmin would be dressed wrapped only in a sequined leopard skin. so all these tidbits and anecdotes could have been effectively used to paint a portrait of how things lead to other things, as they always do, ending in some concept of what made halston tick. studio 54 was oz the curtain, the giant mask suspended in smoke (impressive and often thrilling as that was). this film appears to have missed the opportunity to find out where the wizard's balloon really led.

You know Puffy,as a good fashion historian, you are right to be shaken by your fickle fickle world. But dahling, even great, renowned art has its period of decline and neglect and even total oblivion. As Hickcock once coached his actor: "It's only a mo-o-o-o-vie".

Just saw this film from my DVR from Showtime Showcase this week. It is a shame the photography is so poor and the interviews (with few exceptions) badly conducted. Halston's impact on fashion and his personal style deserves better. Doing a hatchet job on Victor Hugo is a mistake, and smacks of homophobia- not to mention the host of the film- why not let Andre narrate the whole thing?

One of the worse documentaries I've ever seen. Halston DID deserve better!