"The million things we say" 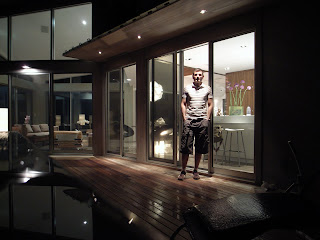 The song by that title is playing as I cook dinner tonight, the beginning of Memorial Day weekend. Anton my boyfriend, partner, significant other, love interest, squeeze, unwitting victim of the past 27 years is on the road probably sitting in traffic with everyone else on their way. I did the nice thing and went to the fish market to get something yummy and even got some fresh flowers to dress up the place. This is probably the 27th or 28th Memorial Day we've spent together here since the fall we met so long ago. This song by Donati on the "Vagalum 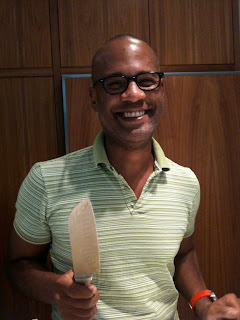 e" cd is bringing it all back to me.All those years ago when we were just kids planning our assault on the world we'd talk about what we'd do. I was fresh off my stint in Paris and he was a shiny new hot shot at the U.N. What's cool is that all those things we said, those millions of plans we made, we actually lived them. Sitting on the other side I feel like making some new plans some new territories to conquer or least visit. Listening to this sexy, languid jazz gets my mind going taking in the here and now but also the there and then. I went through my treasure trove of ultimate buttons the other day and they got my heart racing. Walking into Paul Smith that same day did the same thing only I came out wanting something I couldn't find. Sure, I got some killer striped boxer briefs but I'm after something with a bit more heft. Driving through the center of tow 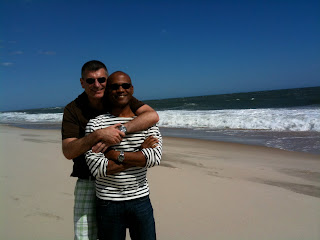 n I was looking to see if it was somewhere out there but I didn't see it. Even Hermes was shuttered which was the likely spot. All I saw were harried women in too tight jeans, impossibly awkward shoes frowning without frown lines kind of like mouths moving and no sound escaping. So I came back, showered, put on my lederhosen and started cooking. Black truffle olive oil can make the most ordinary things extraordinary. The swordfish goes on the grill in a few minutes and the speakers are on in the woods. The million things we say is echoing in the forest and Anton will be here soon. Another summer is started and its kind of nice to be setting the table and making a yummy dinner. I hope you all have a good one too.
Posted by Fluff Chance at 9:22 PM 10 comments: 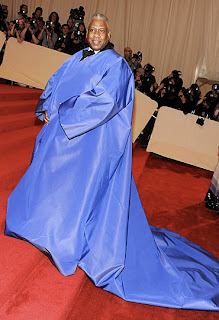 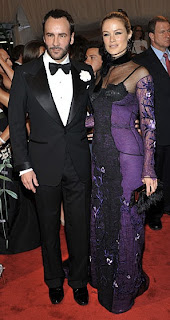 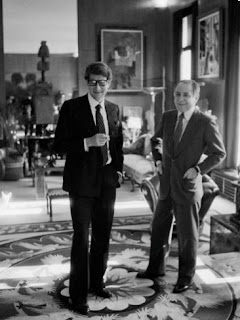 sitting in the cheap seats. I did take in L'Amour Fou, the compelling documentary on YSL and Pierre Berge. I went 2 days in a row and could still stand to see it again. That is a visual feast. The art, the archival footage, Saint Laurent talking, sketching, unravelling; all of it fascinating. I can't help but think that his story ended in a timely way. His benchmarks were set, the stage was packed and a full house cheered. His point was made. As I watch Marc pump and preen in the mirror of my gym, I ask myself what will be the essence of his contribution? For the life of me I just don't know. It probably won't matter by then. It doesn't matter now.
Posted by Fluff Chance at 6:05 PM 13 comments:

Alexander McQueen: Savage Beauty at the Costume Institute of the Metropolitan Museum 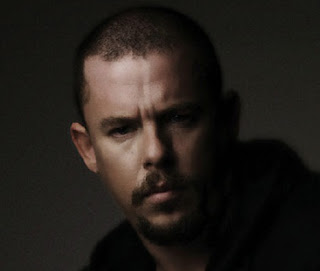 At the entrance to the show are 2 extraordinary mannequins. The first in red glass beads and a sea of scarlet ostrich feathers and the other a long, severe gown made completely of 8” long razor clam shells layered from neck to floor like an indigenous costume of some lost tribe. Immediately and jarringly I see that I’m in a world not even remotely of my making. The first room which shows his ground breaking graduate collection from London’s Central Saint Martin’s College is so conceptually complete and audacious that I’m standing and staring like a tourist who’s visiting the planet Earth for the first time. The adjoining wall has this written on it: “ You’ve got to know the rules to break them…” It’s abundantly clear that in the first moments of his life as a designer, McQueen learned the fine and complicated craft of tailoring and then spent 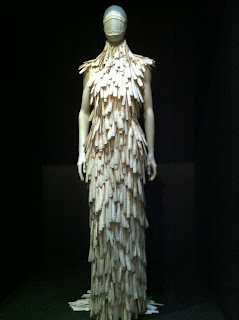 the rest of his career undoing, redefining and subverting it to his own ends. Unlike many designers, his knowledge of the techniques of cutting, draping and tailoring cloth gave him the ability to leap from the highest peak and fly wherever he wished. Exquisite jackets, suits, tuxedos, and jumpsuits stand all around like specimens from another world. They begin as recognizable garments and then morph into something else. His quiet, masterful hands make it all look as though they were always this way. The patterns are all drafted and cut by his own hands… no army of assistants, yet, and still they’re precise, perfect. From there I hear a howling wind, baying wolves and a sense of foreboding rises in my stomach. This next room is a hall of mirrors, dark, antiqued, smoky mirrors that rise 15 feet overhead with what appears to be vitrines like the Victorian scientist’s Cabinets of Curiosities. The spirits of Poe, Darwin and yes, McQueen are loose in this disturbing space where the woman 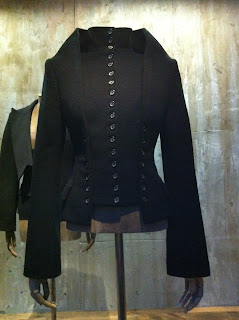 has devolved to resemble ravens, wraiths and ghosts. Black is the color of everything. Leather harnesses snake all over the bodice of a shredded gown with millions of ruffled layers. The harnesses, which could be described as sado-masochistic accessories, are more a cryptic form of lace with their intricate perforations and the sheer multiplicity of their number. Farther along the wall is a model with a pair of wings made of laser cut balsa wood attached to her body by a harness. It just stops you in your tracks. I wait for the guard to chase down another camera toting tourist and shoot it for posterity. There is yet another piece that makes me feel as though I’m in the presence of something divine. She’s a creature completely rendered in black duck feathers. Think the final scene of Black Swan and multiply that costume by 1000 and you begin to get the power of this creation. The room that is exceptional in its breadth of oddly, customized monitors showing segments of his shows, countless examples of shoes, jewels, head dresses, even a coral b 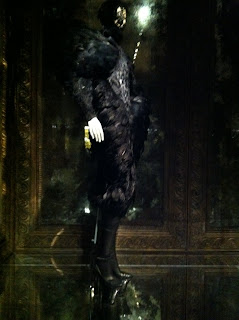 ranch as a crown, armor, and other accessories was like something more akin to the Museum of Natural History. A group of artist collaborators, namely Philip Treacy, Shawn Leane whose cast silver crown of thorns and matching thorn bramble that climbed the full length of an arm, and Dai Rees Balsa wood wings and a skirt of the same material that was as circular fan all laser cut like lace was as intimidatingly profound as McQueen's clothing. There's simply way too much to try to share without going on forever. I admit that my feeling about McQueen was that he was a bit of a renegade with pretensions of being a couturier and suffering from some self indulgent bad mood for the sake of the press and stores who always think a designer has to have a gimmick to be taken seriously. I was wrong. The show goes on and on exploring his vision of the Romantics, his Scottish heritage and the direction his view of the world was going. Is his vision savage? I’d have to say yes. Is the work beautiful? Beyond question. I have a much greater respect for his commitment to his work and his passion for his dark muse. Though the skill involved in the expression of these ideas is cerebral in the extreme, mapping these deep, disturbing layers of the soul is something only very few have the courage to do. Alexander McQueen was an artist of the highest order. His contribution to the world of fashion will be remembered for many years to come and his loss is a hole that will never be filled. I walked away feeling that he said what he came here to say. He wasn’t cut off or cut short. His message has a clear beginning and end. Only the end is a clarion call to the rest of us to go forward with eyes more open and searching, ears to hear the sounds that disturb, and hearts that are willing to embrace the total experience of life. You need to see this show; it’s beautiful.