There's nothing like 2 weeks in the Middle East to put the shine back on the Big Apple. The sun and heat restores all the lost vitamin D that a winter in the northeast annihilates. It was almost like I'd been fast asleep and all of a sudden someone (Allah, in this case) turned on the lights. Luxury shopping malls with yellow matte finished Maserati and Silver Ghost Rolls Royce sitting in unfussy displays for all to touch, sit inside and order (yes order) along with teeming boutiques like Hermes, Dior, Bottega, Armani, Dolce and Gabbana, Valentino, you name it, were all full gleeful shoppers. Luxury shops in Doha are not the elephant graveyards of the west but actually a very viable market. Yes, I know, Qatar has the highest per capita income of any country in the world and shopping there is the national pastime besides pumping gas and counting money, but still... Luxury is alive and well there and it put a smile on my face as one who hitched my wagon to that endangered species so long ago. Despite a sandstorm that blew up in minutes to engulf the car, blotting out all visibility beyond five feet and the grit that settled in my nose , eyes and mouth, I actually feel more clear sighted than I have in a long time. 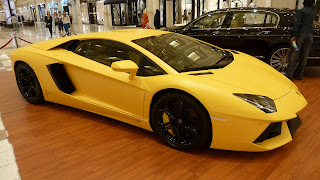 Dressed in pajamas in my bed on my Qatar Airways flight back to New York, I watched several movies; 4 to be precise. That's easy to do on a 14 hour flight. You can even fit in a 5 hour nap and three full meals.Once I'd exhausted the film choices I started surfing the video library and happened upon the spring 2012 collection of Elie Saab. I've always discounted him as a spangle crazy, red carpet hustler satisfying the needs of the J Lo's of the world...not exactly my cup of Joe. He and others like Zuhair Murad are some of the truly popular couturiers in the Middle East not excluding the usual players that crowd the Paris scene. They succeed in places like Doha, Dubai, and Riyadh because they happily pile on the crystals, paillettes, pearls and kilometers of silver and gold thread satisfying tastes that are in general way, way over the top. They do so without complaint with fees that equal the cost of a perfectly nice house, delivering them by the jumbo-jet load. I'm sure that some of the wooden crates I saw being transported from the bellies of cargo planes on the tarmac were gilded creations enroute to some lucky princesses desert palace compound, which brings me to the subject of weddings.


Weddings are the social occasion of any given week. The royal family, the Al-Thani, is vast numbering more than 2500. With numbers so large in that family alone, there are a lot of weddings going on. From what I've been told, the sexes are separate for wedding celebrations. The men congregate under elaborate tents giving toasts and shooting off guns well into the night. Not exactly my idea of a good time, but hey, who am I? The women in contrast have their party for other women only, pulling out all the stops with fashion and jewels. There's nothing in the west that can compete with this level of display including popular get togethers like the red carpet at the Oscars or Golden Globes. Tradition plays an integral part in the proceedings with the groom's gift of jewels to his bride which are delivered by armored truck both for the sake of security and due to the sheer volume of "gifts". The invited guests are in their finest which goes from haute couture to, well, haute couture. The black veils and floor length black abayas that cover them in public are all left at the coat check. I'm talking sexy, revealing, super cha-cha looks with hair and make-up that would make Cleopatra grab for her compact and a paint brush. One cardinal rule of the game is the wedding dress must "out-zhuzh" the "zhuzh" that's filling the room. Elie Saab, Zuhair Murad and players like Dior, Chanel, Valentino, McQueen and YSL and even Vera Wang deliver the "zhuzh". It appears that aesthetic concerns are sacrificed in service to the desired end.

My point in all of this is that Elie Saab consequently never registered very high on my radar until I watched his show at 36,000 feet. I watched it about 6 times in a row and would have watched a 7th if the captain hadn't interrupted the show with the announcement that we were landing in 5 minutes and it was time to climb out of bed and put some clothes on. Though there were pailletes on many dresses and gowns, the collection was very glamorous, colored beautifully in whole sections of white, saffron, jade, blue/grey, and melon but was surprisingly minimal in overall detail. The shapes were deceptively simple and yet, young, modern and unstudied. It was a marvel to see looks that had all the jazz a "special occasion" calls for minus the vulgar, the obvious or the gratuitous. The only collection on the New York runway that came close would be Carolina Herrera this past season. She's another one I'd lost interest in like Oscar de la Renta with season upon season of oddly unsophisticated clothes heavy on the self conscious and light on real chic. Her brand of elegance has been too often about refusing nothing, but this season it was fantastic. It was everything I miss from Blass, Oscar, Valentino, Ungaro and Balmain. Herve Pierre, her creative director and his second in command hit a home run. Elie Saab did the same and more.


Watching his collection over and over was like the fashion show equivalent of the Mile High Club. It gave me a rush, I felt all yummy inside and wanted to go for seconds, well in this case, 7ths. Check it out and see if you get a little tingle. Even the girls walking the show were sexy, sexy, sexy along with a selection of music that was equally good.


It's great to be back home. Happy Easter! Happy Passover! Happy Weekend!