Monse (back) to Oscar de la Renta...where they belong.


Enough with the bullshit. Ok, I've said it. Yeah, but what bullshit you ask? The story that just ran in the NYTimes about Laura Kim and her sidekick and ex-fiance Fernando Garcia returning in triumph to the waiting arms of Alex Bolen, tough-love Dad, son-in-law and acting toll collector at Oscar de la Renta. After a gloriously banal performance at Carolina Herrera, having taken the wheel for a season and a half, they are returning to the fold that spawned them. Like Zika, they hatched, flew around the immediate neighborhood infecting any and all in their paths, and now are returning to that puddle of standing water from whence they came. When Oscar lived it was a crystal clear pool but now... Why the harsh words? Because this is precisely the diseased behavior and magical thinking that has undermined the business of fashion.

The piece written by Matthew Schneier is a regulation 'birth notice' of sorts, more press release than story touching on the few things that can't be disputed: They worked at Oscar for several years, Laura Kim became the creative director and Fernando chased celebs, Oscar became ill, Laura and Fernando auditioned for the permanent post of creative director and celeb chaser but were passed over for Peter Copping, Oscar's hand-picked successor, Laura and her celeb chasing fiance start their own 'brand' and jump ship to consult at Carolina Herrera, usurping Herve' Pierre, the creative director at CH for the past 14 years and one of the greatest working designers on either shore. The Kim/Garcia fit at Carolina must have been poor as they produced a forgettable couple of collections. The culture at Herrera is old school in the best possible way. A devoted staff directed by a very professional seasoned team led by Herve Pierre ran that ship without incident. The collections were ready on schedule and were eagerly awaited by stores and clients. Carolina Herrera is that rare company that worked civilized hours leading up to the show. Late nights and weekends were alien to their process. Imagine a company that could actually be ready for their presentation with samples made, fitted and styled on the models with time to spare. Images below illustrate the beauty and modernity that was CH under the capable hands of Herve Pierre and his team. The sophistication and chic of the collection is a stark contrast to the Resort 2017 collection by Kim and Garcia. The Resort 2017 collection, their first at the house, debuted weeks later than CH's customary timing, with a look both derivative and strangely flat and received with little  fanfare.
With Laura and Fernando the ship went aground almost immediately. As is customary with new hires some of the old regime has to go. Executives, design assistants and boutique staff were dismissed or left because of low morale and an environment of uncertainty. Digging around in the press I searched for the message, the grand design they had for CH. I didn't find one. It seems that Monse (Mon-say) is their priority and these 'jobs' are a means to finance their fledgling brand. CH was clearly a means to an (early) end. They got their paychecks and CH got, well she got what she got. And now Oscar de la Renta will assist with the grunt work of Monse in order to have the benefit of their vision and leadership. Think Galliano, think Raf Simons, think LVMH. Think again. 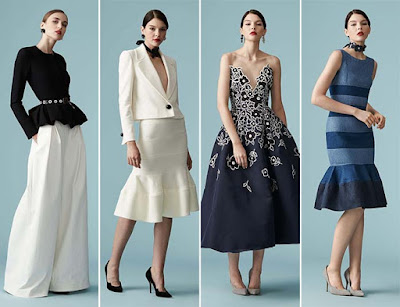 The reviews for Monse were fawning, overblown and judging from the collection, overstated. The reviews they received for their CH Resort 2017 were luke warm in comparison. A few celebs wearing the clothes on the red carpet is nice but ultimately doesn't mean much. Freebies have always been a hit in Hollywood. Selling clothes in stores used to be the metric for success. Now you just need buzz and the press will anoint you. The story implies that they returned to Oscar having succeeded at CH. On the contrary. They were asked to leave CH before returning to Oscar. This was many things but it was not a victory lap.
It's fitting that they have returned to the house that Oscar built.  At least their culture is in sync with that of Alex Bolen, whose reputation preceeds him, and the shell that remains of that once powerful company. Peter Copping wasn't so bad. He benignly maintained the status quo and that's all that Oscar really is good for at this point. It's not about news and it's not new and hasn't been for several years. It's telling that Oscar did not choose them to take the helm. He must have had his reasons. Judging from their work so far, I'd say he knew what he was doing. Oscar's words of encouragement Kim shares in the piece sound more like encouragement than a benediction. SPIN is everything.
I'm kind of curious to see what sort of clothes they'll offer up. Whether it speaks to the clients or not, the press is sure to love it. The depressing thought that I can't shake is the real loser in all of this: the client. Herve Pierre gave her what she needed and what she didn't even know she wanted. Now there's nothing for her but a lot of buzz and nothing to wear. Sounds kind of familiar, no? Something about new clothes for the Emperor or was it Empress.
Posted by Fluff Chance at 12:03 AM 2 comments: