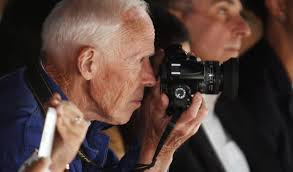 I've just read that Bill Cunningham has died. An unassuming man  who moved within the highest circles of fashion and society, chronicling every moment through his ever ready camera gave so many a reason to get up, get dressed and get on with it. So many women and men made it their mission to catch his eye hoping to be captured through his lens or just having a good time crossing the street, posing in front of a shop window or shamelessly planting themselves directly in his path. For many Bill was the barometer of their getting it right or not. And all who came in contact with that voracious viewfinder looked longingly in the Style section of the sunday New York Times to see if they'd made the cut. 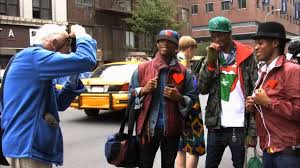 Peddling his way through the streets of New York he was a man possessed. Like a little boy looking hungrily through the candy store window, Bill would shoot any and everything that caught his fancy. From fashion shows to big flashy benefits to his beloved summer carriage meets in Newport, he expressed his love of life and humanity through his photographs. With his passing we see ever more sharply the shift and progression of time. The Golden Age of fashion as we once knew: Bill, Oscar, Yves, Emmanuel, Hubert, Valentino, Jimmy, Donna, Calvin, Geoffrey, Carolina, Carolyne and on and on...well, the bright lights of that era have all been dimmed. It's somehow fitting that Bill would in essence close the book on that period. 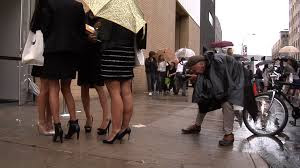 He functioned like social media before social media became a thing. His pictures gave so many of us an inside look at a magical world we could only dream of one day entering. In the film that documented his life a few years back, we all saw his humility, his Yankee spartan way of living that he fiercely guarded and maintained. Like a monk, Bill eschewed all offers of entertainments and gifts by the grateful hosts and hostesses, whose parties he covered. I always found that really admirable. He was his own man and refused to be beholden to anyone, including the New York Times. 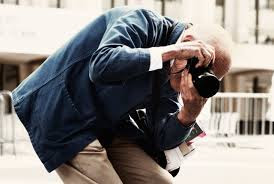 He will be missed by many here and abroad. I expect out of respect for his passing the Bergdorf Goodman corner at 57 and Fifth Ave will close to all pedestrians and traffic on Sunday, which was Bill Cunningham's day!
Posted by Fluff Chance at 7:33 PM 3 comments: