Frankenstorm: and Sandy was her name-o!

It seems that I've traditionally reported to you all from the storm centers of the eastern seaboard. More specifically, the nerve center of art, style, finance, architecture, real estate and society: East Hampton. Well, I have an apology to make; I skipped the gilded confines of our dacha in the woods for the grittier environs of NYC and rural New Jersey. New Jersey was due to the Rago Auction of 20th century modern furniture, objects and art on Sunday in Lambertville. On an almost deserted New Jersey Thruway we rocketed our way to Rago early Sunday morning in time to preview the lots before the gavel dropped promptly at 11 a.m..
The sky was a silvered grey with clouds shaped like racing chariots. The air pressure was shifting causing my feet to swell in my new Tod's. About an hour into the proceedings I was ready to cut them off and walk bare foot. Despite a light rain it was hard to imagine that a cataclysmic weather event was barreling its way up the coast. The distraction of a Nakashima furniture, Bertoia sculptures, Jensen sterling flatware, Prouve, Adnet, Parzinger lighting and Robsjohn-Gibbings chairs and tables took my mind off of the house in East Hampton surrounded by mature trees, 8-foot potted Elephant ears plants on decks, around the pool and heavy chairs and lounges here and there all over the property. The fact that 3/4 of the house is made up of large planes of glass gave me little comfort. But I turned my attention to beauty, and the game of bidding against sharp shooting collectors in the room, but also an army of bidders on the phones and Internet.The skylights overhead in the auction space kept the room abreast of the storm's progress.

The problem with collecting steadily over the past 10 years for a apartment, house and a studio/showroom leaves little room for more. When I've found things I love they are gotten for the long haul, not to be flipped and switched for something else. I feel the same about my friends. I'm not an up-grader by nature unless its shoes, clothes or phones. Other than lamps that could be squeezed into the mix, I was limited to small objects. There was a cast steel sculpture by a furniture maker, Silas Seandel, known for his amorphous bronze and aluminum occasional tables, like enormous kidney shaped masses. This piece suggested an armless figure in patinated steel. It drew me like a magnet and I swore to myself ( and Anton with the auction paddle) that that was coming home with us, NO MATTER WHAT. Beyond this treasure were a pair of Jacques Adnet floor lamps with the look of bamboo in cast bronze. So delicate, so glamorous and so f%*^#$g expensive. The auctioneer actually stopped the bidding to ask if I was ok, my expression was so noticeably stricken. Oh well.

The best of the day were a pair of chandeliers from 1958 ( my birth year) by an Italian designer Angelo Lelli for Arredoluce. I'd never seen anything like them. Cast bronze arms that range against the ceiling like an enormous spider with frosted glass bubble globes like enormous cultured pearls. It resembled a modernist brooch scaled for a ceiling 80" in length and 50" across. It was so striking I would have gladly eaten below it sitting on the floor. Well one sold for $18k and the second went for a song at $12k. Silently, I wept but it planted a seed. I will never forget that chandelier and from now on whenever I have a moment to dream I will search high and low to find other examples that may come available. Light is so important to me. The feel of a well and subtly lit space is essential to my piece of mind. This work of lighting art did just that with the added bonus of being a thing of beauty to behold.

So we came back to a stormy, windblown city. I shut up tight Brooklyn Heights( my love shack) and came to West 72nd st to stay with Anton. We stocked up on food, lined up a ton of films, including Season 3 of DOWNTON ABBEY (oh yeaahhhh), The Heiress, Prometheus, Marnie, The Paperboy,
the NBC Peggy Fleming specials from the early 70's, my video of my last horse show in Palm Beach with my beloved Gomer (Fandango) and the on demand lineup of Homeland, Boss and Honey Boo-Boo. The highest, the lowest and all the flotsam and jetsam in between. I called to caretaker in East Hampton for an update and though the power is out, no real damage happened to the property. A tree or 2 down on the back acres squishing the deer fence and lots of branches and leaves all over the yard, decks and floating in the pool. Fortunately, that it. I miss not being there but this time I'm glad I tempered the stress with a little auction/retail therapy. We were the first to arrive at the auction and the second to last to leave at about 8p.m. It felt good to show solidarity with other certifiable aesthetes. Just after David Rago the proprietor and auctioneer went around dispensing shots of vodka to the hard core survivors of 1400 lots that went under the gavel. Then he and the room thanked us for coming and staying the duration.
The city welcomed us back with rain flying horizontally. Still, as the windows rattled and wind screamed like a deranged Harpie, we settled in, in our jammies, apple-cranberry pie with vanilla ice cream and a remote control freshly stocked with brand new batteries. Though the city all but flooded and blew away, we had a sexy new sculpture, a warm well lighted place and best of all each other.
Posted by Fluff Chance at 5:49 PM 1 comment: 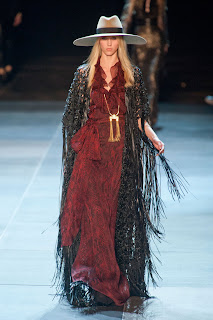 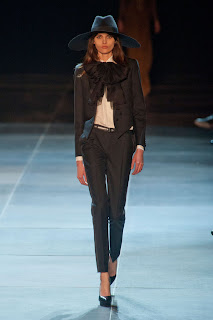 Fashion shows come and go. In a matter of minutes, that thing we all anticipated, argued about, took bets on and convinced ourselves would change the way we face tomorrow happens and it's as though nothing actually happened at all. Here I sit in my Paul Smith multi-striped robe, freshly showered, shaved and sipping an awesome cup of Assam tea watching the (Y)SL collection on YouTube. Hedi Slimane's debut was billed as nothing short of a divine intervention. He was the cherry on top of a cake that's been listing alarmingly to one side. Actually, both he and Raf Simons at Dior were the new Archangels of the moment. Raf's wings were not as buoyant as some predicted. There will be plenty of discussion on the strengths of Hedi's, as well. I will say this: there were moments that had a bit of zip but in the long run, the collection seemed distressingly earthboound. 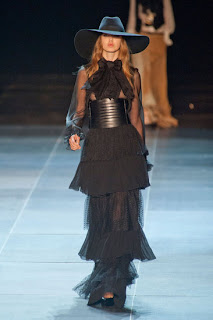 The opening salvo of Smokings, jabot tied throats of billowing chiffon blouses and his signature skinny, crotch foreshortened trousers were interesting for the first 6 exits until I saw quickly that this was the big and the small of his message. The trousers looked ill suited to the models attenuated and emaciated bodies. Though he ushered in this (new) proportion 7 years ago, it no longer has the sizzle it once did. Coupled with shoes that challenged the best of the ladies to walk seductively, or to just walk at all, there was a feeling of tension in the parade. The hats didn't help. It looked like a coven of witches had descended though I know that was not his intent. Still, they looked like witches. The beaded cardigans were beautiful as were many of the jackets, both Smokings and leather motorcycle versions. But the trousers whether in leather or wool stopped the flow of the picture. Slimane's takes on classic YSL iconic styles like the long suede Safari gown, the Moroccan blouses and long billowing skirts and some tiered pleated chiffon gowns were neatly presented but didn't feel new or different. They merely referenced and failed to presage anything to come. 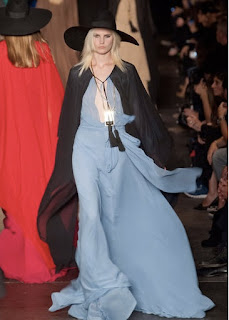 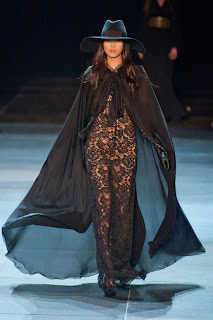 Black was everywhere with momentary breaks of grey/brown and a grey with a few exceptions near the end. Tailoring was the sole technique at play. The "Flou" that we all have loved and anticipated, at least I did, was basically 7 shapes in blouses, long swinging skirts and a djellaba. That's it. They were cut again and again, mostly in black and then in brown, grey, green, red and blue. Making a statement and sticking to it is the name of the game, but this was a little short on ideas, or at least new ones. I liked the black chiffon gowns for their purity and spare detail. The belts were also great. I wondered if he and Rachel Zoe had spent a few nights on the town in L.A. before he got down to work. The clothes looked distressingly like her idea of (Y)SL. I do think that it all had more sizzle than Dior. At least it was sexy. Perhaps, over time Hedi Slimane will do for women what he so ably has done for men.