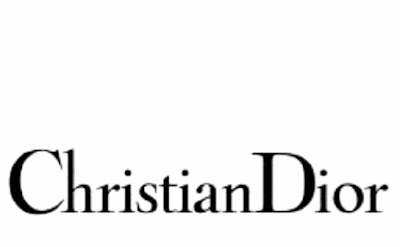 The blogosphere is buzzing with news that there's no news at Dior. More to the point, it seems that talks between Marc Jacobs and LVMH have stalled. Something to do with his wanting to take the Loius Vuitton team to Dior leaving that house without a floor or a roof. Considering his likely demands for a huge paycheck and the prospect of no engine for that fancy car (LV) Monsieur Arnault is between a rock and a hard place. If in fact Phoebe Philo is happy to sit tight and Riccardo Tisci is satisfied to slowly and carefully turn Givenchy into a wholly irrelevant collection that leaves the track wide open for any number of comers. This is where it gets interesting.

The idea that Bernard Arnault is deepening talks with Alexander Wang, Raf Simons and Jason Wu among others should be a nudge to others to throw in their hats for consideration. Raf Simons is a very compelling consideration if you want to push a modernist's view. Personally, I find it very interesting. The history and DNA of the house has always been about the forward movement of a romantic aesthetic. Certainly, YSL took the house forward breaking new ground with each successive collection. Had it not been for his conscription and eventual breakdown and untimely dismissal the house would have likely gone the way of his eponymous collection. He tore through conventions and layed the paving stones for a truly modern woman. Modern Romanticism is the hybrid he developed. Jason Wu is is perhaps adept at a portion of that equation but not, I fear, capable of any real contribution. That picture would likely be ersatz "Jolie Madame-style" at worst and arch posturing at best. Alexander Wang doesn't register on that radar at all. Plus, I think he's truly happy making play clothes.

So, where does that leave us? There are still ot 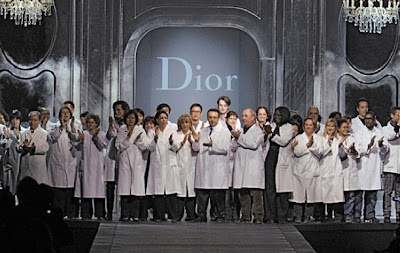 her likely suspects who could do interesting things there but the murmurings are so hushed it seems almost as though the question remains an open one. There's no reason for anyone to be shy about this. The market is screaming for someone to take a chance. Risk is something that we face on a moment to moment basis. Fear of failure should be left in your chest of drawers. Surely, there are great imaginations out there just aching for the chance to do something great. The Golden Age of design has given way to a New Age, one that is impatient and filled with nerve. I'm hopeful that something strange and wonderful is waiting in the wings. Here's hoping that the big guys in charge choose talent over talk. We'll just have to wait and see.
Posted by Fluff Chance at 5:22 PM 13 comments: 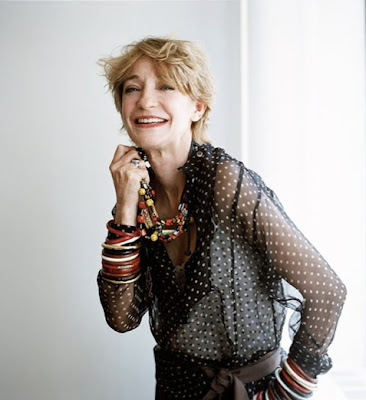 I saw her getting out of a cab one day on 7th Ave and couldn't help but go up to her. Gushing like a school boy, I told her how cool I thought she was and how much I admired her hard work at YSL for so many years and complimented her on her own work. I told her what an inspiration she was to so many people who worked in fashion and those of us who just had a passion for it and how much her sense of style had helped to reshape the way we dress and look at fashion.

She was so gracious and natural not trying to silence my flood of words or edge away. Loulou de la Falaise was probably used to being assaulted by fans. God knows she'd been at the epicenter of fashion history in the making from the moment she joined Yves Saint Laurent's team. Beyond her creation of the jewelry, which became synonymous with the look of YSL, Loulou was a force behind the styling that we've all come to know as the look of YSL. She inspired the master and worked tirelessly at his side. When Yves suffered from mental and physical exhaustion, Loulou and the team helped to keep the collections coming. What resonates with me is her belief in and loyalty towards her friend. Her commitment to YSL went way beyond that of a dedicated employee. She believed as much as he in the importance of his vision.

Just last week in Qatar I met a man, Monsieur Thierry Thomas, who'd been the Premier d'Atelier in tailleur and flou at YSL the last 22 years of Yves' reign. He came to hear my lecture and introduced himself at the end. We sat talking late into the night as he told me of his years at YSL. He told me how Loulou de la Falaise was largely responsible for his getting the position, the youngest Premier d'Atelier in the house's history. I sat there in a state of awe as he relived those heady years working together with Yves and his inner circle. He shared amazing stories about the preparation of many Haute Couture and Pret a Porter collections as well as the fittings he had with many of the couture clients. That conversation was beyond thrilling and gave me the tiniest inkling of what the atmosphere must have been like.

Another great light has been dimmed with her passing. What a fantastic life she lived. She was a great lady and a designer of immense talent.
Posted by Fluff Chance at 6:30 PM 2 comments: 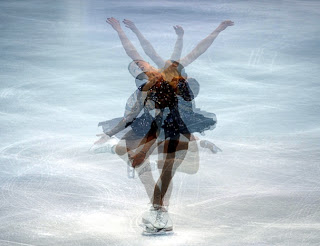 Before leaving for Qatar I did something I've been meaning to do for the past 30 years. Get a real job, you ask? No, nothing that responsible or drastic. I may have mentioned once or twice that as a kid I used to skate. To be more precise, I was a figure skater from the age of 10 until the year before I graduated from high school. Like everything in my life I was a passionate skater who trained year round with a coach, leaving school everyday from about 11 in the morning to drive to distant rinks, train and then returning home around 6 p.m 11 months of the year. Now, I can hear some of you smirking and saying to yourself that I'm just a copy cat and that Vera Wang is the only skating designer who may or may not have been a contender for the gold 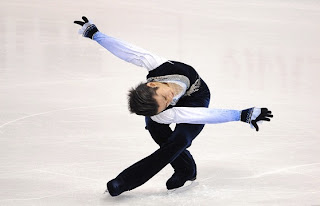 medal or a shoe-in member of the U.S. team if not for her A.P. English class, SAT tutoring classes or ballroom dancing lessons in preparation for her debut.
Well I was another designing figure skater or vice versa. Skating was my life and the thing I wanted more than anything with the exception of becoming the first chair flautist of the Boston Symphony or a member of the U.S. Equestrian team for Dressage, and if those things didn't gel, then a really successful fashion designer who also writes, or vice versa. From the moment I saw Peggy Fleming win gold at the '68 Olympics, I knew that sport was for me. Like Vera, I didn't make it to the top of the podium, have the thrill of international judges holding up scores of perfect 6.0 (the old judging system). Nevertheless, I had the thrill of becoming a pretty good skater with a few medals to hang on my wall. My strength was as a free skater and less so compulsory figures, which is something one n 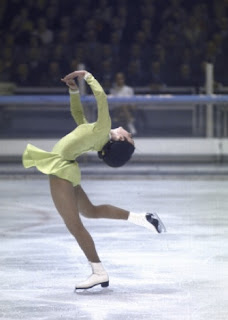 ever even hears about anymore. I was a jumper with a handful of nice big lofty doubles. Triples were a little beyond me unless I over did things and over rotated a double. I never mastered a double axel but my single had a nice big open delay and covered some serious distance.
The point is that skating was a way of life and still something that haunts me. I think abo 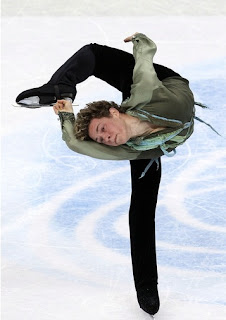 ut it and dream about it to this day.
I had a dream just before my trip that I've been unable to forget: There was a group of people I was wandering with through a barren field covered in a dense fog with mounds of snow and reeds everywhere like a bog in winter. Out of nowhere I see the remains of boards around what looks like a derelict skating rink some distance off. Like a magnet it tugs at me and I'm running through the marshy snow to see what's there. At the edge the mist is just floating above a surface that is like dark grey glass; perfect, untouched ice. (every hardcore skater's wet dream...) Next thing I know I've pushed off and am gliding across the surface in skates with blades that just cut so perfectly I can feel and hear them slice with no resistance. The ice opens before me to reveal a huge area without boundaries. I'm skating the way I used to, turning, jumping and spinning. As I look down at my feet I s 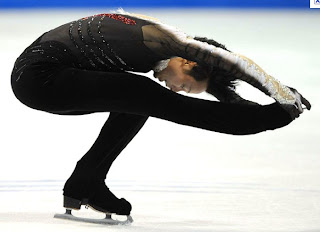 ee that breaking the surface of the ice are a multitude of water lily blossoms large and open the color of silver. It gives me such a feeling of joy that I start skating loops around them and spinning in every possible position. Then I woke up.
What does it all mean? I can't say. All I can say is the next day I found myself at a store downtown ordering a new pair of skates. I took my old ones with me to show the man in charge and he agreed they were best kept as a memory. I was fitted for a pair of boots and ordered the blades like my old ones to match. When I got back from Qatar I went and picked them up. These skates are so beautiful and the blades are astounding. John Wilson Pattern 99's with a toe pick that takes no prisoners. If there's anything I wish for in skating again it's to learn how to really center my spin and do another axel. Spinning was always a weak spot for me. I couldn't hold the center like so many others around me. I'm determ 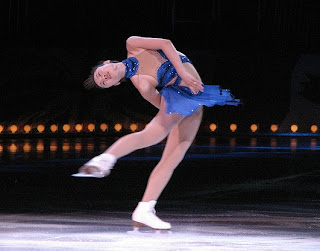 ined to find that center. Even I am not blind to that glaring metaphor. A secret wish is to find a guy who is a strong pair skater. The only time I've ever wanted to be a girl is when I watch pairs do death spirals. The girl has such a cool position in that element and I want to feel what that's like. Wearing a dress or make-up doesn't move me, but being the partner in a back outside ( NOT inside back or forward inside... I'm a purist.) death spiral would be my idea of heaven. This has little to do with fashion or fashion criticism/commentary, but everything to do with the things that make me tick creatively, spiritually and just stuff I LOVE. I will give my new skates a test drive next week and will probably have more to say on the subject then.
For the record I had an interesting week upon my return from Qatar. I was invited to participate in a symposium at FIT on "Fashion Icon 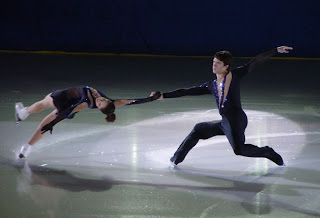 s and Insiders". As that topic is one that I instinctively bristle it was a lot of fun to have the discussion with Eric Wilson from the New York Times in front of an engaging audience. I was very nervous going into it but it went well and the audience seemed to enjoy it. Eric is such a pro and so intelligent. He's a fascinating person to have a conversation with and I would gladly have continued talking well into the night.

I'll look for you all at Sky Rink or World Ice in Flushing where I hear lies the "purrr-fect" surface!
* Blur: a short film by Mark Dennis