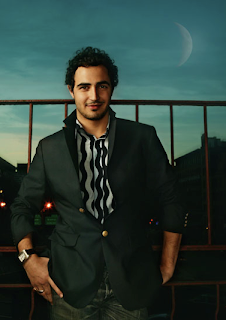 As much as I'd like to switch gears and look on the bright side, the clouds continue to gather and the the darkening skies refuse to clear. I don't know about you, but I'm getting tired of this constant rain. The light shines bright in some corners and refuses to cast it's glow on way too many others. That doesn't mean that good things don't come from trying situations and people under siege. It just starts to feel like the wrong people are getting caught in the under tow while others with less weight and solidity stand fast and gain in strength. Many who have succumbed to the vicissitudes of the grim, reaping economy should have been on higher ground. But that's not the way life operates and certainly not the way the cards are stacked.

Today I was reading about the downsizing of yet more design houses. Zac Posen and Gucci came onto the rada

r screen and I was surprised to read about one and less so about the other. Zac has been keeping a lower profile the last 2 seasons. I speculated shortly before the collections that he seemed to be straddling a fence that wasn't there before. At that time it was announced he would present his collection in a more intimate venue than the tents. That's always a red flag when you're known as a high flying, high roller. Today's announcement stated that his CEO was let go, not to be replaced . Mother Posen and Zac's PR director are slated to take the helm. That in itself is probably good, but I would be uncomfortable answering to Mommy and relying on a PR agent to do truly substantive heavy lifting, but hey.....what do I know of the dynamics there?

What puzzles me most is the decision to cut vital staff when you've been given a considerable investment by someone like Sean Combs, the artist also known as Puffy, P.Diddy, Diddy and Daddy. Zac received something in the neighborhood of 2 million dollars plus. Though the money was said to be coming from P.Daddy, the source was more correctly, Ron Burkle, a billionaire grocery store chain owner. My mind wanders wondering why things have come to this. Two million d 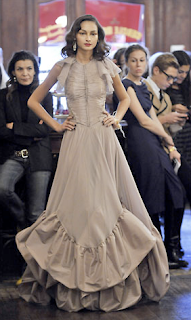 ollars, nowadays, is chump change to many, but it's still a considerable amount of money to most of us. I'd like to think they are conserving funds for a spate of rainy days. The possibility is that the funding is gone or has been withdrawn. Whatever the reasons, the facts are that another very talented young designer is faced with challenges that he'll hopefully master and overcome.I've not always been that much of a fan of Zac's work, it is the sort of bravura aesthetic I've found to be somewhat cloying in it's cleverness and his penchant for all things 1940's-ish, but his skill, eye and attention to the finest points of the craft have always been impressive.

The chemistry that brought P.Diddy, Ron Burkle and Zac together is a very interesting question. Zac's obvious gifts aren't what I question, but why did Ron Burkle, the backer of Sean John to the tune of 10's of millions of dollars, add him to his stable? The press made out that Sean Combs was the deep pockets behind Zac. He was more beard than anything else. Zac certainly added luster and a degree of cachet to a company and it's owner who remains neck deep in over the top spending, conspicuous grand standing and desperate attention getting. Maybe Burkle saw the species of moths circling Zac's flame and wanted to cozy up to their nubile loveliness. The is a simplified answer but certainly a plausible one. So why the mounting storm? Simple, everything is a mess. 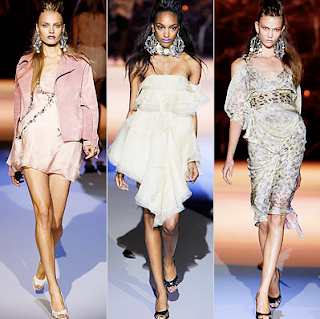 not only cooling it on designer clothing, but are also putting their families on diets. Who needs to fill a shopping cart when you can lock, load and hunt? When Jason Wu starts designing a collection for Tse Cashmere in addition to his collection which is marginal at best, there appear to be glaring inequities at play. Talent has taken a back seat to popularity. The strange thing is that Zac has a powerful PR machine behind him, in addition to the ultimate stage mother and has maintained a very visible presence up until recently. An Inaugural bump is a very powerful kick. More power to Jason and others like Thakoon Panichgul. The world is their oyster. I'm saddened to see how the field has thinned. It doesn't feel right. But that's the way things are now. It will all shake out in the near future, but at present there are too many people at the table. Musical chairs is the game of choice.
Posted by Fluff Chance at 6:42 PM

In the end the numbers need to speak for themselves. Maybe the day's of robbing Peter to pay Paul are coming to an end or are on hiatus until things fatten up? Perhaps someone who was no longer blinded by the glitz and glam finally heard the empty tins of the bean counters rattling and decided those on the ground were being kept because they are usually the ones doing the real heavy lifting and could plant those beans and harvast?

Fluffy, what goes around comes around I guess. You'll understand why things have come to this at Zac's if you had worked for him and witnessed how his family treats his designers and staff... it's a mad house with no organization nor honesty. It's all about how the star feels and feels like that particular day - an exZ

I'm not surprised about this. Working for some of those designers is pure hell at its best. It makes Hell look like kitty litter, just stinky. Getting things done at some fashion houses is a mission even if it is to buy some toilet paper. Things like that come to an end fast. In times like this no one wants to deal with that. Zac's talent... why are we talking about him again???
Happy Friday and Happy Karma Day!

Dear exZ,
very compelling comment. Drop me a line. my email is listed below, I think. Organzavoid@gmail.com. I'd be curious to toss the ball back and forth...if you feel up to it. Either way, thanks for your comment.
Fluff

Dear other Anonymous,
Today is Karma Day???? please elaborate. My email is listed. I'd like to do something positive.
ever mindful,
Fluff

You are so right when you say talent has taken a back seat to popularity, and that seems to be the case with every art form in America. If you've got a following-instant popularity! Many people are so brain dead that they can tell the masses anything and they'll believe it and will do everything in their power to have it. Maybe since Zac is getting older, his youthful luster is fading off. You do know how this country has an obsession with aging, don't you?

Regarding Divalocity's comment about America's obsession with all things young and new, I can't help but be reminded of Esteban Cortezar when he first started out. The press he recieved was insane, all because he was a cute tweeny bopper with a collection all his own. And the kid was nowhere as talented as Zac. Sorry for the slight tangent, but this industry reverence for fetuses is just too much for me to take. Now back to the topic of Zac's business, as an ExZ myself, all that I can say is that I'm not surprised at all. It's just such a bloody shame though.....

i absolutely agree with the first anonymous comment... there is an absolute lack of organization, creativity or respect. sad but true. in order to "work" there you have to kiss a lot of ass.
and divalosity- i suspect, the luster was never there to begin with. what was there however, is an amazing pr machinery, that is failing to do the trick anymore.