Expose: The Facts Behind Snuggies. 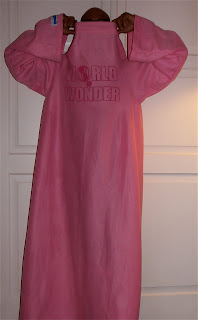 There's something very disturbing happening in the world of STYLE. There's a new player on the field and it's looking to me like it may kick Fashion's collective ass. It's not another IT BAG. It's not a life threatening platform shoe or even a life-taking new species of fur. It's a monster going by the name of SNUGGIE. They are everywhere in every price point and appear to be multiplying like rats. I'm a trend junkie (not) like the next fashionista, but this one is a real Mamma Jamma. I told myself to fight the urge to purchase, even going so far as a 12-step program designed to fight the SNUGGaholism that is blanketing this country, and the world.

Just when I thought it was safe to lounge on my sofa, the doorbell rang. It was the MAN,the UPS man with a package addressed to me. In this new and unsettling world when a package arrives that one didn't order or ask for, you grab it. Who knows....it could contain the new life you've been praying for. I didn't even take the time to sign for it, but snatched it from those giving hands and sprinted back up to my lair, ripping off the wrapping the whole way. By the time the package was stripped bare of it's protective covering, I could feel heat emanating from within. What was in this heat- pumping box? Was it a new life or better yet, a new friend? Maybe a special bonus from Face Book due to my paltry number of FB friends? Nope. It was a Snuggie and it was a Snuggie that had made its way into my home. No exterminator was going to help me now. I was officially a victim of SNUGGINVASION.

To make matters worse,it was PINK. There was a cloying charm to it despite its fabric content which is too awful to print. Still,it spoke to me like a siren's song drawing me closer and closer to the jagged shoals of un-coolness.Ive heard on the grapevine that Italian Vogue is planning a whole issue around it which will be shot by Steven Meisel. The Blogger cover planned for American Vogue may get scrapped just to shoot it on Naomi for the cover. Anna would do most anything to scoop the competition. Fendi is supposedly making one in sable for Andre Leon Talley! Imagine the scale and LUXE of such a creation. I thought Crocs were the last behemoth trend to take over the world, but no, THIS IS IT. There's even a book that's been recently published called the Snuggie Kama Sutra; every possible position enhanced with a Snuggie. That is next on my shopping list.

Once I broke down, 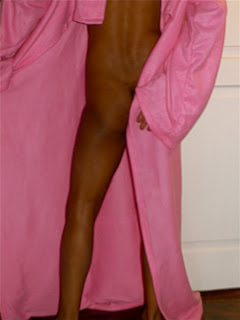 stripped, and put it on, I understood. This was my new life delivered by UPS. I now have a reason to get up in the morning. More importantly, I have a reason to rush home(more like stay home)and wrap myself in its fabulousness. Con Ed can cut me off now that I have real warmth enveloping my chilled existence. My only regret is that all is well when you face life head-on in a Snuggie. But for God's sake don't turn your back. The facts behind the Snuggie can be sobering, frightening and nakedly harsh.
Posted by Fluff Chance at 6:44 PM

This is Snuggie perfection: http://www.youtube.com/watch?v=QDaD5qdJnqU

Didn't Oprah have something to do with this conspiracy? I think she wore on on her show last year, and you know how her groupies hang on her every "gotta have". Anyway, I appreciate the post if no more than to view the eye candy of your sculpted body!!! You are so damn funny, I LOVE your posts, and can"t wait for your book!!!

I have yet to buy one, I looked at them during the Christmas holiday, but couldn't buy one after feeling the fabric. I sew so I feel I could make one out of a thicker fabric. I told my daughter I could have made a fortune if I had come up with this idea, oh well another lost opportunity.

Any article of clothing that is purchasable at Walgreens in the 'As seen on tv' section is just ..... {shudders}! One of my coworker even had her christmas card photo taken of her in her snuggie!

you know the Empire is in decline when.... but nice view.

Can one die laughing? So true about avoiding Snuggie. Siren call, et al. Now WHERE did the Snuggie come from, and PINK to boot?

This pattern has been out in the home sewing market for a long time. Are they now stooping to scoping out quilting shows for one-size-fits-all inspiration? Yet another bad giveaway made of cheap polar fleece.

Must we change the title to "The Emporor has NO clothes"?

puts on my Aunt Edith's XXLarge Bathrobe on backwards, wraps and ties it and LAMO...

hi fluff...my 16 year old cousin puts his on and fastens with office clips whenever he has an early a.m. drive to take someone to the airport. he then can return home and it's back to bed.