On the Good Ship "Ragtrade". 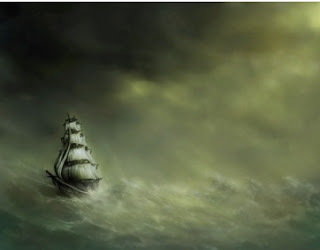 Harrrr harrrr, Matey. It's doubtful your timbers are shivering what with all that cashmere and fur you're sporting. The seas arrrr high with rogue waves coming from fore and aft, so batten down those hatches and hold tight to the wheel. It's a Nor'easter blowing and we don't want to go off course. If we're not careful we could end up in those Far Tortillas or worse yet, Saint Barth's. I hear the same howling of the wind you do and it's got me spook'd, but I tell myself it's only a ghost from some other doomed trader. Don't believe that old wives tale that if you drop a magazine while perched on the throne another editor dies or worse, quits. When I was down below minding my own business I did not drop my magazine. The ship pitched hard to the left and I found myself upside down in the crapper with everything flying. Not just the French Vogue I was reading but every issue for the last 10 years along with my collection of Mad magazines and Boy's Life, too. That would be the cub scout version not the men's athletic posing version some of you rascals may be thinking. When my ship was righted I saw countless spreads by 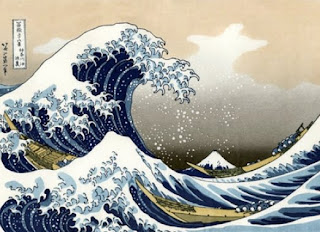 Carine Roitfeld splayed all around and was perplexed. It seemed like one long sitting with all those leopard spots, wide spread legs, open mouths (like a few gasping carp on this floor that must have swum in when we were submarining) and black-faced blonds (is that what happens to a starving model just before her contract expires?). Anyway, I was surprised at her somewhat narrow view when I think of the collective gasp that went up with the news of her exit. She's an able mariner and a style maven to boot but she may be better suited for a swimming pool than these high seas.
One thing's for sure, lots of editors come and go but this roiling, heaving, devouring, uncaring, incestuous, clueless beast lives on.

image: VOYAGE by Paranoimiac on Deviant Art
Posted by Fluff Chance at 8:48 AM

Fluff, nice visual of you in the loo with old Boy's Life Magizine is too funny! Keep up the good work.

fluff..do you really have a few copies of boy's life? remember those..i have a few classics illustrated...like "kidnapped" and "ivanhoe" squrreled away in a steamer trunk!
happy christmas!

Free association says "heroin chic" when I look at her "style" slideshow.

You're much more fun and better looking.

PS. She may get a few points over Anna W. for not looking out coyly from behind a ubiquitous Dutch Boy (as in paint) coif.