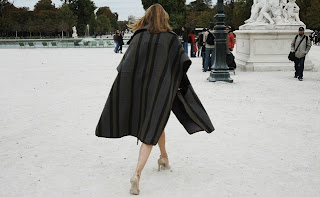 I was just asked my thoughts on the shake-up at French Vogue and had no idea there was a shake-up. Well, it appears there is and it's rather a large one. Carine Roitfeld the fearless editrex of the publication has resigned and will exit as of the end of January. Apparently her exit is due to a desire to pursue personal projects. That may be another way of saying something that has little to do with actual facts. Then again, it may be just that. There's something to be said for leaving the party at its height and not waiting for everyone to get all sloppy and maudlin, like the party that's going on over here... I'm surprised but at the same time I'm not. The winds of change are upon us and I fear many exits are imminent here and abroad. Look closely at bold faced names that were only recently the talk of the town and now are suddenly silenced. When so many predicted the fall of king making editors here, unexpected heads within the court are rolling instead. I imagine the presses will roll shortly casting light on these and other developments.
Stay tuned, and remember, "Keep Calm and Carry On".

Interesting and very unexpected...I wonder what is the reason behind this resignation.Waiting to see who will be the new Editor-in-chief and your thoughs will be very much appreciated.

I get all my fashion news from the internet, bloggers mainly,style.com, what's in the street in NYC and Paris and by seeing what the stores are showing on line. I do not think I care much about fashion editors' influences on images anymore....Vogue USA is trash, French Vogue dabs into S&M and shocking images, to start a conversation, a reaction...Roitfeld promoted the image of a badly coiffed, dirty hair, and unwashed women who had not go home for days due to her party life....The kind of woman one would see at dawn hailing a cab out of studio 54...I know it was all planned, the heroin chic look but it became boring. I rather watch what Tavi is wearing these days...I just don't believe in that sort of Vogue dictatorship anymore... Those ladies bore me.

Love the photo. THAT'S how you make an exit!