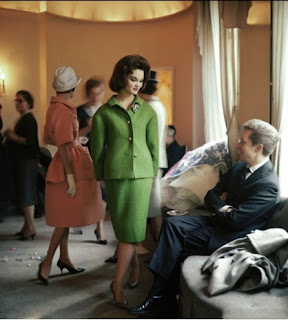 On the first day there was light. Then came the universe and our world. God did all that and said it was good. On the fifth day, I believe that was a Friday, he created Fashion. It was set to appear at noon but for

some unforeseen reason it opened at 2:30. Nevertheless, he was pleased with it and declared that it was “Fabulous”. That’s it in a nutshell. Ever since that fateful day we’ve had one fabulous fashion moment after another and this season

tor has concocted a dish so nuanced and alive that it has called other collections into sartorial question. Perhaps, his secret is simply designing a collection in the spirit of the house free of affectation and contrivance; a novel approach.

easons now, Copping has capitalized on the strengths of his imagination and the legacy of Nina Ricci. Historically, Ricci has stood for

quality, glamour and a woman at ease with luxury. That ease with which she inhabits a world of heightened refinement has informed the very nature of the clothes. Instead of banishing this perfect vocabulary and exchanging it for one that bears little relationship to the DNA of the house, Pe 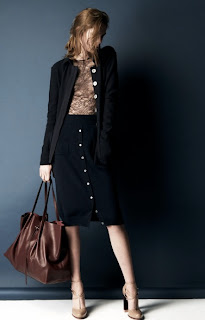 ter Copping has built on it adding new ways to express established ideas. The clothes have become ever more sensuous in shape, texture and most effectively, with color. Nature is his palette in all of its subtle shades and hues. A simple cashmere sweater in th 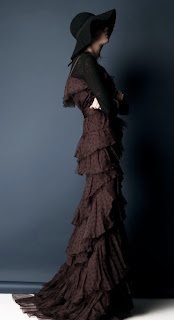 e green of a still pond is paired with a cerise knit skirt designed to look like a cardigan buttoning down the front. This is his idea of a “Twin set”. It’s no longer content to be worn as a sweater but now embraces the whole body. Delicate lace and chiffon cocktail dresses are the last word in feminine understatement as is an undulating column of dotted, tiered chiffon an unexpected shade of tobacco.

This collection is perhaps the harbinger of a new way to dress. Not new in th 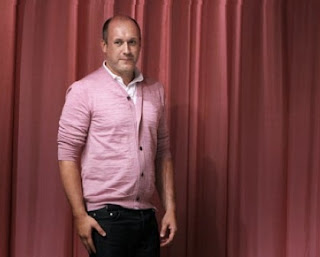 e sense of strange and fussy, but one that harkens back to a time when a women’s aspect could seduce with mystery and an almost lost art, romance.
Posted by Fluff Chance at 9:52 AM

Eric, this is a beautiful collection. For some reason it has that kind of WWII feel to it, but done for today's woman.

i agree with colored man...a beautiful collection! I thank you for bringing to attention the collection I have been hoping for. In general, I thank you for your blog. Likely a silly school girl, I look forward to your posts.

It's an elegant collection. Classic but fresh. At first glance I wasn't feeling it until zeroing in on the colors and details. Pretty.

I love your statement regarding fashion,"back to a time when a women’s aspect could seduce with mystery and an almost lost art, romance".
Stunning description!