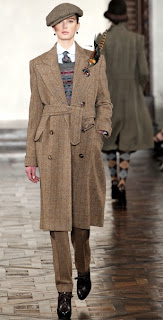 What is it about the obvious that everyone finds so appealing? A leaden foot is so much more interesting than a bit of mystery. It's almost as though the whole idea (or notion...I HATE that word, trope is another one...) of a point of departure is nothing unless one spells it all out in really large letters. So what if the spelling is wrong, mis-spell it anyway. And if you're going to beat a dying horse why not club it with a wrecking ball, just in case your aim is as faulty as your spelling.

That is what I came away with after seeing Ralph Lauren's silly show. After so many years of his Gatsby routine you'd think that even he would tire of its predictability. With

the this country and the world entranced by the Crawleys of Downton Abbey, Ralph and his team would have to pay homage to a story that I'm sure he claims as his own. After all, anything with a manor house, a horse and an heiress is fertile ground for him to plow. Actually, a tenant from t 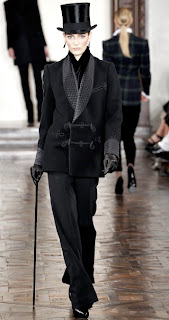 he estate known as Polo Court would do the actual plowing. Ralph, Earl of Lauren would likely be sitting in the morning room looking over the paper's financial pages and planning shooting weekends (that's photo shoots not the bang bang variety). The crystal chandeliers in the great hall would be polished, the fires laid by noiseless upstairs maids, rugs beaten, and Ricky, Countess of Lauren would busy herself with the seating, menus with cook and doing her best to keep track of her delightful issue: Candy, David, Lauren squared, his wife, and Osiris the pet Labradoodle. 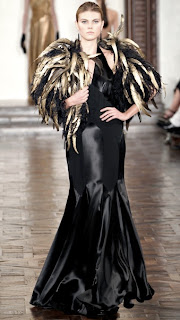 In his haste to top the show with his own show, I think he mixed up his metaphors and did Albert Nobbs by accident. Unless I was watching the wrong show I saw about 250 cross dressing girls march down the great hall in everything from "beaters"

tweeds to smoking jacketed ladies with ascots to dressing gowned girls getting ready for dinner complete with argyle socks, velvet slippers all sorts of mannish accessories. Once dinner was set these same "ladies" appeared in formal wear, white tie, tails and the like before he realized his mis-step. At the last moment they quick changed i

nto heavily beaded tea dresses and flapper drop waists ready to Charleston their way to the new century. There was one smart little black crepe dress with a bit of fun at the neck that looked like it had been plucked right off the boney shoulders of Wallis, Duchess of Windsor. Another gold bullion embroidered evening jacket over something long and silky was the spitting image of a smart little ensemble Coco Chanel was photographed in. The point I'm making is that it was another show of a bygone era ripe from the make believe world of an everyday grunt from the Bronx. His exceptional success is to be commended but fashion, it's not. It is more "Of A Fashion". The design was period-perfect, the fabrics exquisite, the detail is top notch and the atmosphere is, well, atmospheric. But when the press gushes over it I'm reminded that the Lord of the manor is too often cheered simply because of his wealth, not his ideas.
Posted by Fluff Chance at 2:42 PM

Yes, just more rehashing the Reagan era...yawn...quick, someone get him a calendar!

Personally, I feel very embarrassed for him. I blush when looking at these ridiculous get-ups with the knowledge that no one, thank God, on any street anywhere looks like this. I feel the same thing, by the way, for Marc Jacobs who at least has the good sense to know he's full of shit.

He is a manufacturer not a designer.