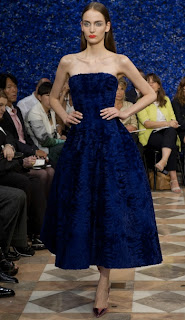 Well the day came and the day went. Raf Simons gave Christian Dior his own personal imprint and it was a light touch at that. If not for the floor to ceiling walls of blooms, those 5 salons would have been as deathly quiet as a street in Juarrez after a drive-by shooting. Just looking at the faces in the front row, all five of the front rows, with Marc and Anna and Grace and Glenda and Azzedine and Alber and, well, just about everyone that matters in fashion, there wasn't an expression of delight or even interest after the first 10 exits came and exited. It was clear from the beginning with the exception of a sexy little peplumed bustier in black over matching ciggies that in his haste to leave Jil Sander, Simons forgot to grab his imagination. There was more life in one pair of the shoes he did for his last Sander collection than in the whole of this dreary march to nowhere. The same 4 themes repeated themselves over and over. There was the ubiquitous Bar jacket with exaggerated round hips, the bustier with frothy, "COUTURE-SHAPED" abbreviated skirt over slim black ciggies, a coat dress with a bustier or peaked-lapels, with or without sleeves, and a full skirted bustier dress in cloth or fur. Mix into that heady group some archival embroideries on the backs of dresses with another current iteration in another color running down the front and you have a couture collection that someone said, "....changed the landscape of Haute Couture forever". Mmm...I'm not so sure about that, but then again...amazing is the new meh. 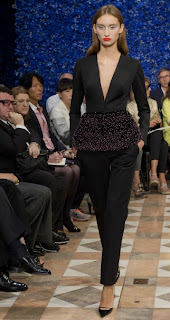 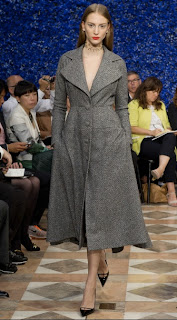 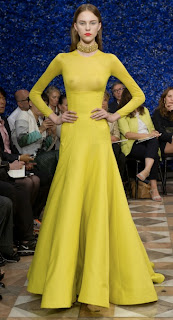 I awaited this show as much as many of you. My curiosity was spurred not so much by Raf Simons as by the fashion world's hunger and conviction that this would be the game changing marriage of the  century. I had my doubts especially considering the fact that Anna Wintour and other confused hacks were so convinced. I will say that these things take time and one couture show doesn't make one god or the devil. I am surprised that there wasn't more life and creativity in the collection. In 55 looks there was ample opportunity to lay out a road map for what the future might hold. Looking back at the Fall 2012 presentation Simons made for Jil Sander, it was rife with ideas, dreamy colo, a nod to the golden age of fashion with a steely eye on its future. There were so many things that one could imagine seeing, wearing and having. That did not happen today at Dior. The looks of boredom and disappointment in the audience made me uncomfortable. What's more, I can promise that everyone will rally around the bonfire and say how amazing it all is. The furs were a big red flag. The first black Broadtail coat was beautiful. Even the dyed navy blue bustier in Broadtail was working, but that was the end of that riff. The white peplum strapless over skinny pants that were on the chubby side of skinny fell flat. The fit of the top of the ensemble was droopy and buckling. The same could be said for several other exits. All of those furs looked like a stilted vision of luxury. 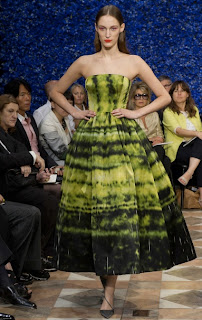 Fit, which is a hallmark of the couture ateliers at Dior, was uneven. A few of the long gored skirts in faille had a rippling surface that did not look intentional. Pairing that with sheer stretch tulle long sleeved tee shirts was off putting. If you look closely at the ensembles you can see what I mean. I wasn't fishing for this, it stared right off the screen at me. There was a grey wool wrapped coat that looked like a mistake. It was poorly conceived and made badly. The attention to the bust on many of the looks with little tucks and inset cups like wall sconces drew attention to itself in a jarring way. The girls looked like little girls in need of some padding. The digital prints of tie dye on a few dresses, a gown and coat were great looking but didn't seem to have a place in the larger scheme of the collection. All in all, it looked like very serious sportswear. It was not what one would expect of the Couture. Maybe that will come in time, we'll have to wait and see. In the meantime, I'm wondering if there was a rush to marry the two entities; a shotgun wedding of sorts. If so, maybe the house should re-think this step and Raf Simons should re-think what he really wants to do. This feels like a no -win situation.

It was definetely " a look epure' " So epure' that one could only look at how thin and sad those girls looked ! A strong lipstick attak though ! Great fur fourreau dress at 29,nice coat dresses .Don't get the tie dye bits... Darn it's a great Oscar de la Renta collection no ?
I miss Galiano's theater.( Marc Jacob took over "that" I guess)
There will be plenty of time to rock the boat a bit later.. Lets wait and see, what will Hedi Slimane do ...

blah..... Dior, really?!
where's the exuberance? the joie de vie? it's... sellable and easily copied for far less money... there will be plenty of knockoffs from China that will look just as good for a fraction of the price, st your local mall... so, will the grande dames buy this "couture" if that is the case? why pay the price if it is nothing special?
has Galiano's mea-culpa time-out run its course, yet? he needs to resurface soon to shake things up a bit, I think. or, someone like him... couture is becoming expensive sportswear...

Fluff... this guy was never gonna work for Dior. He was never about fit at Jil Sander, so why should he start now? LOL

I expect that this "marriage" will be headed for a divorce pretty soon. Unless something radically changes here, he's going to alienate people w/ such a radical and minimalist approach to such a baroque label/legacy.

BTW, do you still post at Cathy's blog? I haven't been over there in ages.

Thank you!!!!! Thank you! Thank you!
After reading most of the reviews, I thought that either I'm losing my critical eye or that opiates were lining the show space walls.

I was waiting for a cleaner less theatrical Dior and I got this blandness? Having not seen the clothes in person ( and I think I can safely assume that the fabrics and handiwork are heavenly and took hours of skill), my question is this: shouldn't there be a line that separates a highly custom dressmaker who builds on the body and couture, something that just propels me into space?

What I find amusing is that, in my relatively few decades following the couture, everyone's first collection, rightly or wrongly, got panned ( Lagerfeld for Chanel, Ferre for Dior, Montana for Lanvin, McQueen for Givenchy.) The reviews of this show should have been more measured.

That said, there's a learning curve to working with a new atelier and large corporation, so time will tell.... in exactly 6 months.

I completely agree. A lot of these looks looked recycled from Jil Sander. Could he at least changed the fabrics?

Fluff: THANK YOU for this honest, excellent review! I too felt the same way viewing the collection, and was confused after reading the fashion press's reaction. I actually went back a few times thinking I had missed something...
To my eye, the embellishments looked forced, like they were plopped on as an afterthought. It made me think perhaps Simmons does not yet know how to utilize the resources of the couture workrooms? I'm really straining to see the future, how a designer with such a minimalistic and streamlined take on dressing can work in the storied house that brought back fashion excess in the post-war era!