Giambattista Valli is an old soul. His collections embrace the art and beauty of old school Parisian fashion complete with the all the bells, whistles and ruffles that have defined it over time. That he moves the conversation forward with somewhat eccentric ways of reordering the puzzle pieces to achieve a new and oft times compelling story is to be admired and commended. There have been collections and pieces of those dreams that have struck me as truly original, which is big reason I follow his work expectantly. There's a freedom in his Pret a Porter collections that can at times overshadow his Couture efforts. The process of experimentation is somehow backwards; the lab seems to be his ready to wear and the couture feels more like an overstatement of those previously explored ideas. It was that thought I couldn't escape while watching this show.

His abiding love is obviously fabric. The Fall couture was awash in Warp Printed silks that looked like gardens from the 19th century. Like heirloom blossoms that exist only in the rarest gardens, these prints that opened the show in reds, pale washed out reds, coral, oxblood with black accents,some of them against a barely there ground of oyster, were just glorious. When they changed and became an expanse of greens that mixed with browns, bronze and black, that were at once dusky then almost camouflage shades, it seemed like watching a garden through the prism of the late afternoon into night. It was his die-hard embrace of layers and layers of ruffles starting at the neck and running down sleeves, outlining the length and the waists of the skirts below, that I started to feel overwhelmed. Some of the treatments of extreme ruffled volumes on skirts started at the very middle of the rib cage. Peplums were stiffened and massing at the same point. In many instances as the model passed the back was left bare. The effect was a front loaded dress or gown that was all about coming and not so much about going. The fact that the taffeta was stiffened with horsehair on all the edges and the skirts, both long and short, created a stiff, bobbing effect that looked awkward. Imagining the model sitting would create big, noisy breaks in the body of the dress. This effect was repeated ad nauseum.

Then a fabric change came with printed,floating, diaphanous chiffon and airy, crisp organza. He played with razor thin tucks, again layers of ruffles, shirred and flowing skirts with trains a kilometer long, all grand and otherworldly. A group of metallic shot brocades joined the scrum as stiff as a vintage Balenciaga dress but without the same finesse or weightlessness. They moved more in opposition to the body than in harmony with it. There were so many unintended references to vintage Balenciaga, Valentino and Oscar de la Renta that I began to get restless and impatient. 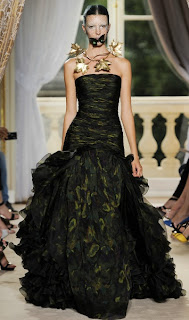 The accessories were another story, altogether. Regrettable Point d'Esprit tulle that looked like chicken wire covered each model's face. Butterflies in silk were liberally placed on this second skin as well. The ones alight on their heads were dreamy. It was the ones that landed square on the model's mouths that brought to mind "The Silence of the lambs". I doubt that was intended, either. Jewelry consisted of golden crowns of branches sitting at the neck (doing battle with Elizabethan ruff collars) and cuff bracelets of enormous beetles and scarabs. Menacing.

That butterfly in their mouth is such an aggression, so bizarre, completely out of place...Go figure...

Another example of how emotionally exhausted everyone is...

For Spirou who responded to my comment, there is hope! Nature abhors a vacuum...

On you tube Raf simons gave an interview about Dior. It is also on shaded view on fashion. It is such a mambo Jumbo of words and key phrases that means nothing, an interview that all designer must give I guess, but what is there to say ?...It talks about the modern woman as if it was this " new thought, new area" I feel the " modern " woman whatever that means, wants to be beautiful and well dressed as always....He speaks of Dior as if he was gonna make such a change, re-interprete it. when in fact there is nothing to re-interprete after Galiano.I feel now that some designers are like politicians, they talk, they talk forever and do very little...The girl at,express-mode ,is in Shangai for the Louis Vuitton opening, she was stunned to discover that all the fashion bloggers there ,were officially on big brand payrolls, a payroll that depended on how many hits they got !!!!! They all laughed when she told them she is supposed to be an independent thinker... They all wanted to be paid and are paid by fashion brands and make up brands from Europe.

Spirou,
I just knew there was something I was doing WRONG.... No trips, no sponsors, no swag. Bummer.....
Fluff

Brand nosing has its perks !

a for effort... struggling models tho

Hey Fluff, are you doing"les vacances de Mr Hulot ", at the beach vacationing, riding horses and sailing ?
I thoroughly enjoyed the article in the times about the house of Blass, closed again and especially "the revolving door of Bill Blass designers" ( interactive graphics). Now here is a novelty, the talking blog !!!!
Made me very sad , I loved Bill Blass. Do you think it is the way the magazines show the clothing,the style of the magazine, that has destroyed fashion ?
Spirou

Well, this is not my week ! Now La Piaggi has passed away. I loved her to death ! She was like Dali and Marcel Duchamp,. She was like l'oiseau de Jacques Prevert. Pure poetry always....What is gonna become of us all, the good ones are all dying off....Now we are left with La Guiness and her skunk hair !!!! I am going to walk around in my comme des garcons mourning coat for a week....