Ulyana Sergeenko: Another face in the crowd 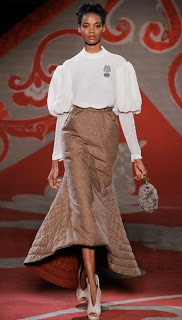 The Russians are coming. The Russians are coming. Actually, they're here, there and everywhere. That includes couture salons  the couture runway. Ulyana Sergeenko is the newest addition to the lineup with her first presentation in Paris a short time ago. I've been seeing her more and more in the press as an avid client of several couture houses and had heard she dabbled a bit with scissors and thread. Not until yesterday did I realize she'd gone and put on a show (thanks to my eagle-eyed friends Spirou and Anya, who are all seeing, all hearing and all knowing!!!). Not wanting to remain in the dark too long, I dashed to YouTube and took a peek. My bestest, BFF Jolain of Style Illustrated has a rule of thumb when perusing collections: if it doesn't grab you by the short hairs in the first 5-10 exits, well then, that's your cue to exit. I broke that rule with this collection. It didn't grab me in the first 20 exits, but I hung on out of a perverse curiosity to see just what was coming down that runway next. After 32 exits it finally ran out of gas. That's being kind. It ran out of gas after the first 5 or so, but after that I stopped counting. 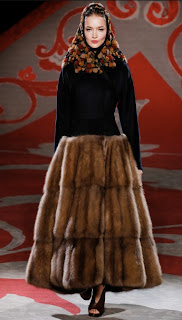 It's always interesting when you see designers, I use that term loosely, tackle this complex job when their roots are more solidly planted in the retail world. What I mean by that, are designers who are really world class shoppers, not creators. Think Vera Wang, for instance. Ulyana Sergeenko strikes me the same way. Unlike Wang who copies much of what fills her closets, Ulyana seems to draw a blank when it comes to design. Her vast couture wardrobe fails to register when she's hard at work in the studio. Instead her inspiration comes from that fertile ground where she roamed as a child. There's an overarching Dacha vibe complete with peasants, the military, rebellious teens on a barren plain and the maids who did the sewing and cleaning. How else can one explain her eccentric take on fashion design? 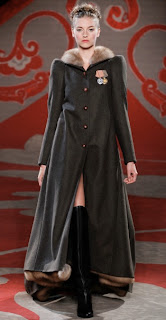 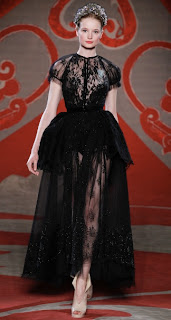 She opened with quilted skirts like the comforter I used to sleep under by night (as a kid) and wrapped around my waist as a gown during the day. I'd go up and down the stairs holding it like a deb at his first cotillion and then sitting on the sofa spreading it out around me like the Queen sitting for her official portrait, but I digress.... Add to that a blouse with mutton chop sleeves. There were printed long dirndls in sobering oxblood with gold dots and a criss-crossing ribbon harness. Another had a faux apron in applique lace panels off the sides. The barren wintry plain was referenced in snow bunny knit sweaters, pouty little bloomers, down mittens and a fur hat shaped like a crash helmet. There was a homespun feel to some of the looks in fuzzy angora sweaters and long full skirts that said neither this or that. The sable trimmed Military coat that fell to the floor was sobering in it's dark grey color with a red skull cap atop the model's head. She liberally sprinkled military issue medals on blouses, and coats alike. The towering Drum Majorette hat crowning a sheer chiffon tee shirt and velvet booty bloomers was pretty much the last word. Not to be a total Debbie Downer, there were a few looks that were amusing and creative. A long fitted coat had sable pelts falling from the waist to the floor which had a little something. A black lace gown was particularly pretty at the bodice and the looks that were pure sportswear looked smart and relaxed in a serious sort of way.

So, with that said, I'll say no more about it. Take a look and see what you think. If you can't make it and have buckets of rubles, then just buy it....
Posted by Fluff Chance at 8:04 PM

There was a designer in Paris, Tan Guidicelli who designed for Mic Mac and then under his name in the early 70's.He did the most fabulous duvet coat, colorful huge, so great...Kansai Yamamoto did as well. Still I would have loved to see you wearing your Queen of England satin duvet/hermine coat, going down the stairs slowly to meet your subjects ! I did that too....
Darn, I am old !!!

I am starting to suspect that Russian theme is best done by those who are not Russian. It seems that every time one of the brilliant minds of fashion is touching on the Russian subject it has enormous appeal: let's remember Chanel's costumes for Dyaghilev Ballet, Russian Collection by Lagerfield, Ukranian by Galliano, YSL's beautiful approach to the theme and even Prada's jeweled, kokoshnik-like, confections - all in high demand. On one hand, I feel like Russia's long forgotten presence on global runways is now a thing of the past. It is important since Russia, before the Boleshevik's Revolution of 1917, was one of the most beautiful influences and breading ground for the best in Fashion, starting from the designer to Empress of Russia herself Nadejda Lamanova, to eclectic Valentina, to the House of Irfe which opened in Paris by Noble Russian Immigrants Yusupovs. Russia and France always had this phenomenal connection and mutual affection that I find myself still missing greatly. Several years ago "Irfe" was bought by a wealthy Russian model, but, unfortunately, high hopes for resurrection of the House, proclaimed by Vogue, L'Officiel and gazillion of other publications, faded into grey ashes since money were never guarantee for creative component. And now there is Ulyiana. Let's have mercy on her and hope that the first time is always the most difficult. I felt like her Collection was overstaffed with every single cliche one can possibly find in the history of Russia. Her references ranged from the war with Napoleon of 1812 into the Soviet era of Russia in the 50-s. I seriously doubt it was done intentionally so that everyone gets how Russian Collection really is. Ulyiana has a very appealing aesthetic but it is not clear yet if it is best kept as her own personal style or transformed into something larger. For now, I felt as if the Collection was a fine salad of every idea Sergeenko had in mind and could not wait for all of it to be put out there. The reviews from the very impressive front row were very short and, should I say, neutral. Suizy Menkes did not care to analyze Collection at all, for example, there was a short rather something from Ms. Menkes, but nothing in depth. Ulyana has many advantages: money, influential friends and name she has made for herself by creating her own unique style - this will help somewhat. I will wait and see what will the next Collection bring. Thank you, Fluff, for following me request. I do agree on what you have said.

a bit too literal, no? nothing seems new or fresh for that matter.. just a rehash of old ideas... some of those outfits remind me of ballet costumes. I dont have a problem with fur per se but, just because you can put it on every garment, it doesnt make them special or "couture". it's like putting foie gras on every plate on the menu...

There is a book, and it is the ESSENCE of it all. I got it in Paris but amazon can provide it.
Collection Chabelskaya : une Russie de fin de siecle: portraits de femmes en costume traditionel.
Editions de la Martiniere. From the foundation pierre berge'/Yves saint Laurent. Fluff, if you cannot get it , I'll send you a copy.It's a must !
It is all there ! Nothing else to say concerning that style, it is IT.
Jean Paul Gaultier like Lagarfeld, gets it, he understands the language and the history, he knows about old French street details, because he comes from a working class background, so he knows and he remembers what matters. His point of references are pure , simple and innocent, but , he knows how to interpret and translate into luxury. He has a great sense of humor about women and clothing, he loved his grandma and her lingerie... A rich woman without a sense of humor or a witty brain is dead in the water. There is a difference though between humor and vulgarity. I am bringing up JPG because " IT " has all been done by now, we have seen too much, so what matters now is " a clin d'oeil in the hommage". JPG is good at that! Grant you, his last collection was raunchy...
Sergeenko's collection had no humor. Who did she hire as a stylist, I do not know, but what a mistake. The accessories killed the clothing which was weak to start with. She did a good pret a porter/garment center collection.What we called in paris "the Sentier" Unfortunately "Ventilo" ,the brand, does very good "folkloric" on a regular basis for a fraction of the cost in the Sentier .He is quite known in Paris for it and does very well. Maybe one has to remember the line between Couture and Pret a' Porter. It is not because you have the money to do a fashion show that you can do Haute Couture. So put on a show, invite your friends, but that does not mean everyone will play in your sand box. Kenzo, Ter et Bantine and Dorothee Bis did their first fashion show in 71, with little money, great humor, an incredible feast for the eyes, no pretend, just fun, what can't one do that if one has the money ? Where is the fun ?