Too little is too much 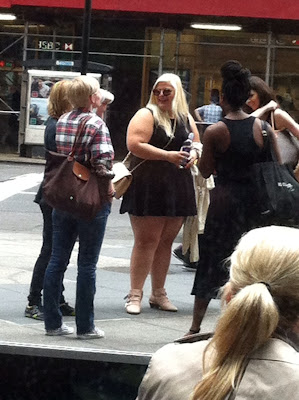 You wonder why I've taken a break? Where have I been and why did I go? I just needed to get some air. It's gotten so thin up here in the cheap seats. Watching the action from such a remove with the specks parading coolly down the runway as though they were game changing ideas has given me vertigo. What is the point and what is the message? The answers don't appear on the runway and they haven't appeared in the press, either. If anything the game of bait and switch has reached a level of complexity rarely seen in the last 45 years. For some of us, we can do that math, subtracting accurately without the help of a smart phone calculator, and come to the moments when order shifted to chaos. Granted it was a slow moving tsunami, but one that nevertheless mowed down and washed away so much that was beautiful, coherent and yes, even forward thinking. Modernity isn't something that happened post 9/11.

Beyonce was not the first superstar with processed hair (extensions). Reed Krakoff was not the first one note designer going for 3 notes. Anna Wintour was not the first visionary at Conde Nast, nor the first influence peddling adventuress. Oscar de la Renta was certainly not the first Latin lover to dress a society matron. Andre Leon Talley was not the first editor to become a caricature in search of a gig that would restore him to his glory days as a bonafide editor, once more. John Galliano is not the first genius to go down in flames at the height of his powers, though he may be the richest. Dior, (Y)SL, Balenciaga, Ungaro, Balmain, Blass, Rabanne, Anne Klein and Ferre were not the first powerhouse design establishments to suck wind. Anna dello Russo was not the first fashion victim who will live and die by the dress hanger. Some editors/fashion critics of the New York Times, The Washington Post, The International Herald Tribune are not the first oracles to be sniffing toxic fumes sending out mixed messages that mean nothing to even the most educated of ears. I can't tell you how many times I've spoken to people in the press (yes, I know some interesting people who write for real newspapers and magazines) who ask me if I get what's going on or if I'm as confused as they are. I've come to believe that confusion is merely a state of knowing but an unwillingness to believe. Sort of like realizing Santa is really your parents doing the best they can.

What once flew high is now skimming and skidding along the ground. Sitting in Gregory's on Seventh Ave. between 39th and 40th minding my own business, I watched the river that is New York's fashion industry meander by. It was busy and at the same time strangely empty. Tourists taking pictures of the tailor hard at work on his sewing machine were cheek to jowl with young fashion workers busily making a display of their presence and profession or just posing as fashionables like those who crowd the tents at collection time. This blond woman in a dress so short that she spent every second tugging at it to attempt to cover her almost completely exposed lower half. Her example was the perfect illustration of too little being way, way too much. The spectacle has replaced the spectacular. Chaos, the new order of the day. Still, I am fascinated by the ebb and flow of culture and the highs and lows of fashion. That said, I'm back in my seat way up near the roof and straining to see all that there is to see. Welcome back to my world.
Posted by Fluff Chance at 7:11 PM

A few years ago I attended a summit that Gilt.com hosted for it's vendors. One of the panel speakers was Joe Zee, the topic was something having to do with social media and bloggers, etc. The subject of Bryanboy came up, I asked Mr. Zee if there was any hard data from the companies that work with bloggers, like say Prada with Mr. Boy, to justify their hosting bloggers front row, showering them with expensive freebies, etc. Hard data meaning, is it really paying off? Is there a direct translation to sales? Is the blog reader really the woman buying a $5,000. dress? He could not give me a straight answer on that, he mumbled something about building brand awareness. I guess no one really knows, least of all actual magazine editiors. Just go with the flow I guess, right?

We have missed you very much. I have readily checked the blog for news every day and your always wonderfull views of this circus called fashion.

I missed you fluff! Glad to see you are back and writing.

That blonde would have been featured in the old (good) Vogue's FV feature. Fashion Victims shot on the street.

Unfortunately now FVs are everywhere, even in high places, so it is no longer just a street thing. Sometimes the view on the street is better.

You are the only one who knows the real deal when it somes to style. Very glad you're back.