Golden Globes and Oscar: Red Carpet is a River of Blood 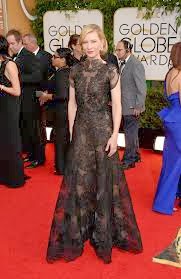 The Globes actually took me by surprise last week. All of my energy was directed to the National Figure Skating Championships and who would get named to the US team. The more time passes the farther away from the fray I've drifted. I remember the days when the award season was all that any self respecting designer thought about. This year's Globes limped along like last year and the year before with a red carpet that resembled a river of blood quite literally before air time when some water sprinklers got too hot next to artificial lights spewing filthy dirty water onto the carpet. The maintenance crews jumped to it mopping and drying it as best they could before the first regrettable train dragging gowns appeared. Tuning in for the pre-show fashion parade was not on my list but Anton suggested I might want to see first hand and not hear about it the next day. To give you an idea of the degree of my enthusiasm, I would rather have packed the car, gotten out of E Hampton and onto a Long Island Expressway traffic jam than listen to the inane people they've dragged the river to stand and ask the stars who/what they're wearing and little or nothing about why they were there.

I was neither surprised or disappointed watching the stars herded to the waiting mikes like animals going through a station by station check-in with an eventual neutering at the end (Fashion Police). It was a grim march that seemed completely lacking in excitement, surprise, wonderment or humor. A horror show in broad daylight without so much as a drop of elegance. From the moment I saw Woody Allen's "Blue Jasmine", I knew the award for best actress was Cate Blanchett's to lose and ditto for her appearance on the red carpet. No one has the ammo like she does with the exception of Charlize Theron. 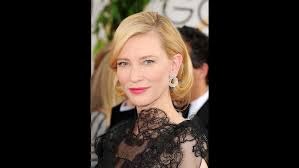 Instead of drawing the whole spectacle out I thought I'd just say whom I thought looked best which includes everything: manners, grace, attitude, carriage, dignity, mystique, elegance, humility and humanity. That's a lot to cull from just a woman in a dress but hey, that's my criteria... Cate didn't disappoint. Not only was her Armani Prive couture dress beautiful and appropriate, it was unlike any of the other dresses there. Light, dignified and provocative in the same breath and fit like a second skin. If you noticed whenever the camera rested on her seated at her table she was a vision of self possession and an object of real beauty. Her static quality was like a still figure in a charging mass. But when she collected her Best Actress award she was as alive, unexpectedly candid and excited as a kid at Christmas. It was impressive. It was a classy moment.

Not so much the rest of the proceedings. The party line for the evening for the press and fashion hounds was that this year's key word was Haute Couture. The press starting with (maybe) the NY Times stated that any actress worth her weight in star power was ONLY being given couture to wear and they along with their savvy, brilliant stylists were"working" directly with the best fashion houses to make that couture gown uniquely and only one-of-a-kind-ish-ly JUST for that star. Sounds like a big deal only that's been going on for years. Sorry nothing new in that story except that it was the "official" story of the season. Still there were so many actresses that looked ok at best and awful in the cold light of a late Hollywood afternoon. 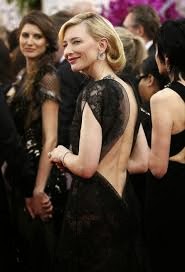 I loved the "homages" that kept me and  I'm sure many of you guessing. The first red flag were the pictures in the Times of Tom Ford's designs for Gwynneth Paltrow (white cape over white column) and Julianne Moore ( black and white gown in geometric wedges of contrasting color). One of the first dresses I saw was the red off the shoulder strapless gown with attached cape on the actress starring in "12 Years a Slave". It seemed so obviously Ford's design, but why when it was so identifiable with Gwynneth last year at the Oscar's. Even though it was more dramatic in red and strapless on this actress, it seemed lazy. Then the same thing happened moments later when another forgettable actress gallumphed up to the commentator in a halter that had almost the same lines as Julianne's Ford minus the sleeves. The halter was in fact Ford's, not a wise move. But the red was Ralph Lauren. Not such a wise move to copy so carelessly on a telecast that the world watches. So much for haute couture. for this league it should be termed " Ote Koo-chur".

Dresses fit the stars like skin for the most part. The lengths and trains were awkward and their ability to walk was seriously hampered. Lena Dunham of "Girls" fame should give Zac Posen a rest. He may be her friend and past classmate at Saint Anne's in Brooklyn Heights, but friends don't make friends look like shit on a global telecast. Just saying. And as far as the Haute Couture issue goes, 99% of the clothes worn can be seen in the collections of all of the designers from Spring14, Resort 14 or the couture fall 13 collections. So much for one-of-a-kind-ish-ness.

Here is what is so confusing: did the entire Hollywood stylist body forgot what Haute Couture really means? Did they even know in the what it is in the first place? Since when Ralph Lauren and Tom Ford(as much as I respect both of them) are considered to be Haute Couture? This really bugs me. Anything goes with anything...oh, well, but it is Haute Couture you see? Don't like being taken for a fool. Fashion Police should be banned from the carpet. I would trust them with covering maybe "Here comes Honey Boo Boo" or "Hillbilly in Heels".Juliana Rancic made me want to poke my own eyes out not only with array of stupendously idiotic questions and the choice of her own gown but with complete lack of manners: she seemed to loose interest in almost every one she interviewed so obviously fast - it was almost ridiculous.

So true - such a collection of dreary, unappealing clothes...the Grammy's however had many beautiful looks...