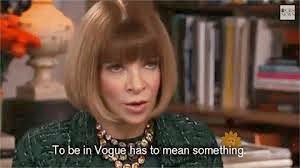 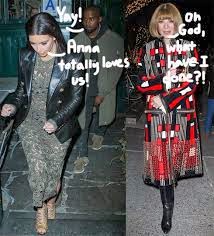 Commanderette Anna Wintour and her crew of stalwart, stoic and steadfast recruits are not as dim as they sometimes appear. Where I've questioned her heavy-handed games of teacher's pet and her flip side as Miss Hannigan to an orphanage filled with the privileged, her latest move to offer up Kim and Kanye as poster children with the intent of a mass adoption is pure bizness brilliance. I shuddered passing the newsstand seeing the innocence in Kim's hooded eyes and Kanye's studied "baby daddy" pout. It was the dress that caught my eye. Following those "couture" folds up, up, up til my eyes landed on their faces, I was almost seduced to pick it up and thumb through. But above those mugs was writ large: VOGUE. Vogue? The Kimye Westdashians on the cover of Vogue? It must be a joke parody cover like MAD magazine used to publish...? well, um, no. It's real. I'm all for the zeitgeist but not when it is more the "Paranormal Activity" sort. 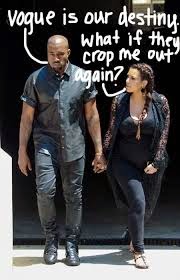 Lots of folks have been confused by this. I was until it finally clicked that Ms. Wintour is not so much the arbiter of taste as she is a balls to the wall bizness lady. Sell magazines? That's one thing she can see how to do through those sunglasses that increasingly remind me of the ones you can buy at 4 in the a.m. on an infomercial for Snow Birds nesting in Boca. You know the ones I mean... They look great at the early bird special at Olive Garden and perfect on the mini-golf course. So it looks like this issue will be a blockbuster. Perhaps with a slightly different demographic but money will change hands. Anna's explanation for her choice was straight out of the Cloud (gaseous and foul smelling): 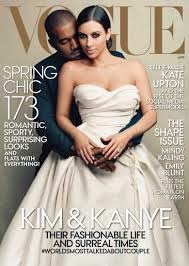 Anna says,“There’s barely a strand of the modern media that the Kardashian Wests haven’t been able to master, and for good reason: Kanye is an amazing performer and cultural provocateur, while Kim, through her strength of character, has created a place for herself in the glare of the world’s spotlight, and it takes real guts to do that.”

Prior to The Cover the magazine had lost its way; now it's lost its value.