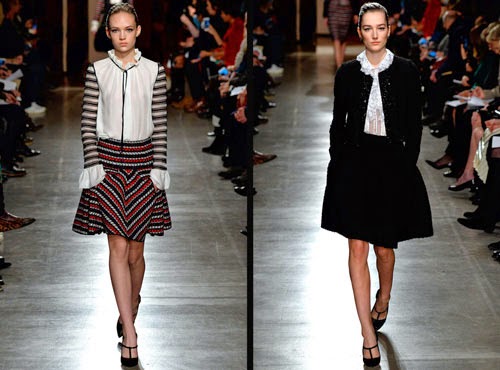 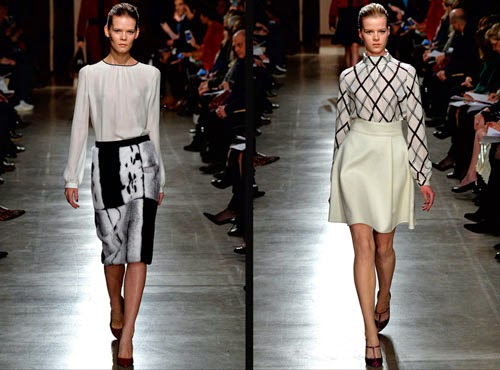 I suppose next to the shows of Marc Jacobs, Carolina Herrera, Proenza Schouler, Tom Browne, Calvin Klein, Alexander Wang, Joseph Altuzzara and Jason Wu, the debut collection of Peter Copping for Oscar de la Renta was the hottest ticket of the season. So much anticipation and speculation roiled the denizens of Park Avenue and points farther east, south and west. What would he do? How would he handle the enormous pressure of moving the storied house forward. Would Annette, Oscar's still-in-mourning widow and all of her ladies in waiting give the nod to Mr. Copping? Forget the singing, the dancing, and courtliness of that legendary man of the world. Those arts died with him. Instead, what of Oscar's 6th sense for knowing precisely what his Ladies wanted, needed and craved? Could this Englishman schooled in the subtle art of French Haute Couture come to this raucous land of snap crackle pop and actually make an argument for the house's future? The answer to that question is a qualified yes. 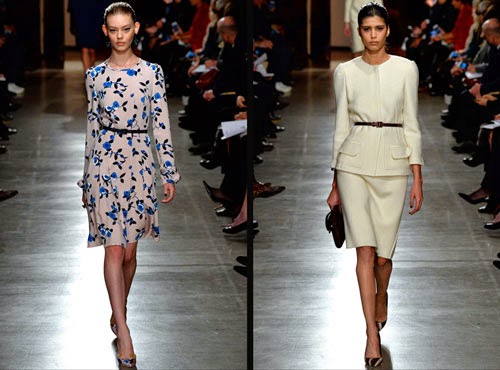 Qualified simply because it was neither a triumph or a failure. The 47 looks added up to a safe, at times sparkling, but most often an almost quaint display of artistry. The first looks out with their lovely, weightless silk and lace trimmed blouses over short bias striped wool skirts had a youthful quality. So delicately wrought were those blouses that they looked untouched by human hands. That's technique at its best. Perhaps the absence of jackets or coats over those looks gave them that schoolgirl feel that every matron over the age of 60 craves. Though lengths were short, the high waists added that extra above that had so skillfully been excised  below. One detail seemed to cancel out the other and all in the same piece. Then came the suits, the suit and coat dresses and printed silk dresses. Sweet but redolent of the days of Jack Mulqueen and the $150.00 silk dress, a working girl's dream! With prim coats in plaids and fur trim circling the hems and cuffs, this was not so much a fashion question as it was a style statement; familiar and yet hackneyed.  Styling becomes a thorn at this moment as that sense of mad mixing and matching begins to color and underwhelm the work. 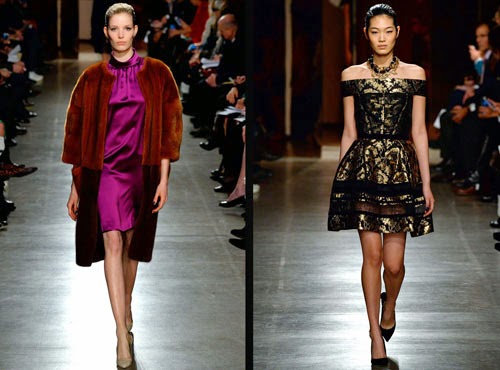 The Lady never slips off her pedestal. Instead that pedestal becomes crowded with the "codes" of the house we hear so incessantly about: sweetheart necklines, skinny belted uptight suits with little sex appeal, jeweled pumps and smart bags of indeterminate origin. Cocktail dresses abounded in racy lace, nude appearing bodices armed with boning to keep all that order in order. About now I started to yawn. 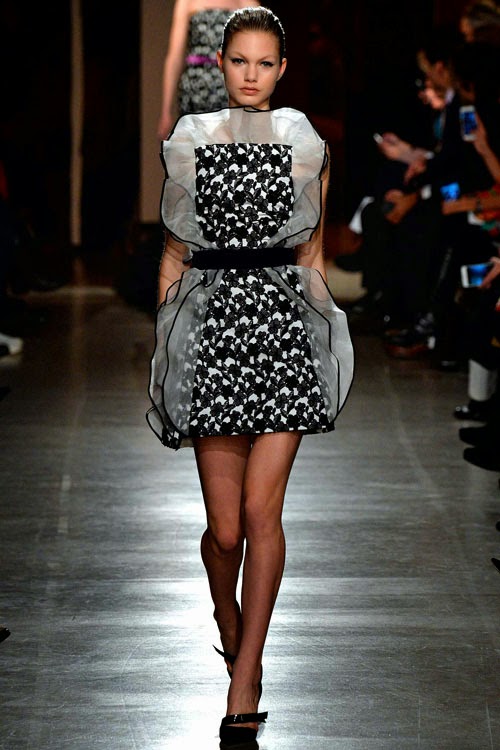 Gowns followed with many in black and white. For all those women who beg to have a dress with sleeves, well, come and get it. Copping showed his ability as a colorist with rich saturated mixes in short and long dresses. Nice. Where I found issue was that some of the colorations felt like timid YSL mixes and shapes smacked of older Oscars by way of new Diorisms. Nice but not great. Nicole Phelps of Style.com fame went further to question the fit of the clothes. The clothes fit. The studio there is so deeply schooled in the discipline of quality, make and fit that questioning that is utter nonsense. But like Vanessa Friedman of the New York Times, Ms. Phelps is a dilettante better suited to chronicling her own outfits than analyzing others, like the pot calling the kettle a plate.

Perhaps in time the collection Peter Copping wants to propose will appear without the weight of other's expectations, mine included. 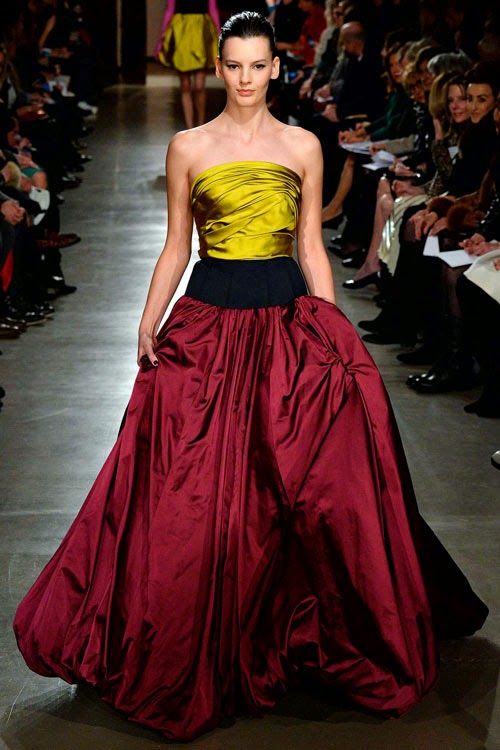 Honestly, I am not sure what I am looking at, is this Ralph Lauren/Chanel/Diane von Furstenberg/Raf Simons.....What is it ? It's clothing for sure, I see fabric and zippers, but I do not see a style that one could call " it's couture from ? " What is this ?