For all the hurry up and wait, the collections here went by relatively quickly with little or no fanfare with the exception of a couple of spectacles (Givenchy and Marc Jacobs) and a whole lot of partay-ing. Sticking one's finger into the scrum would feel more chilly than warm to the touch. The in-ness of it all has done the opposite of what one might have expected.

One's attention now must turn to the wattage of the attendees and not so much the subject: fashion. There's lots and lots that passes as fashion but like the crowd of bright lights it's way more styled than actual style. Unless your thing is Kimye, Kendall and Ko. there's not much to hold onto.

Still there were some surprises that were, well, surprising. The first of which is a feeling of the spirit of Ralph Rucci in the air. Well, the upper layers of air, at least. You could see traces of his oeuvre in collections from Zac Posen and Carolina Herrera.
If you look at the details of Posen's cuts they are rife with RRucci's little worms connecting the suspended elements. It feels clumsy. 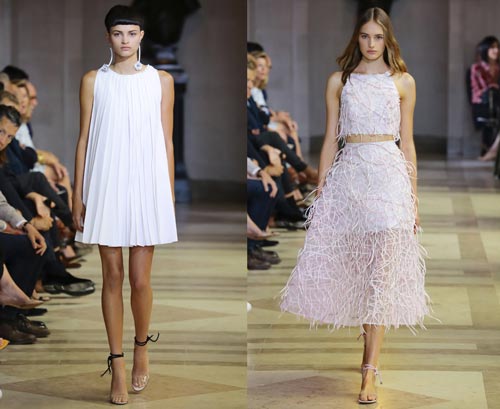 At CH the picture is decidedly different. The clothes are really nice. I mean yummy yummy nice. They look good enough to eat! The colors, the shapes, the chic of it all. Maybe, because I have a very warm spot for RRucci's aesthetic, I'm swayed by it. But in this case not. 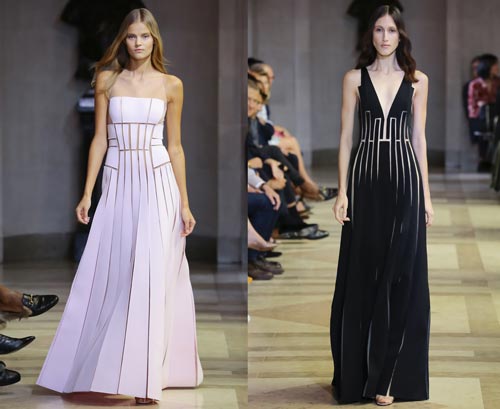 The work at Carolina Herrera just gets better and more interesting every season and this season it made another leap in my eyes. They are the last remaining house that exists in NYC from the Golden Age of fashion. They are informed by Haute Couture and have always worked in a similar way. It's not about tech packs and samples being done in some foreign country there. They do things the old fashioned way. They make it. And they make it in all of it's blinding, complex, envelope pushing, luxurious, modern and romantic yumminess. In this instance, she paid homage to his genius.

The Frick Collection was the setting for the show adding a quiet grandeur to the proceedings. It was first class from start to its assured finish. Wow, who knew you could see design at its most beautiful and forward reaching at New York fashion week? Especially, since the closing of Ralph Rucci. But that may have been just a momentary absence from the calender. My sense is that RRucci is not finished pushing the envelope. And if CH and Zac are any indication, his oeuvre is far from forgotten... 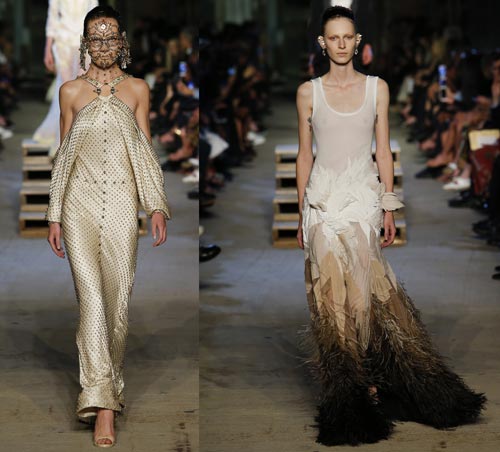 Givenchy's presentation was very interesting. A setting outside on the water, ubiquitous in its location but seriously beautiful in its offerings. That it would all be held up waiting for the Kimye juggernaut to be seated makes me wince, just slightly. But that's what you have to do nowadays. Take the bitter with the sweet. Prabal Gurung proposed some very nice clothes. Great dresses are at once unassuming in their complexity.

There were also moments at Altuzzara and at Bibhu Mohapatra. Rosie Assoulin is another collection that intrigues. She makes a feast of her pants. They are a ball gown's version of a pant. Unlike a few season's past where her energy was more successfully channeled with graphic color plays and skirts constructed of straw, this outing felt decidedly tame. The same can't be said for Wu, Boss by Wu and a handful of other notable stars on the horizon. I won't list them at the risk of being vague. Those collections are vague and freighted with expectations not yet met...You can start with A for Adam and work your way thru to W, X, Y and so on.

Delpozo was an event. Especially, with the clothes standing still. That is an imagination with all its engines firing. The shapes, colors, details, etc. were traffic stoppers. But in motion they look more like floats, barges and luxury liners. It's hard to imagine coexisting next to many of them but harder still to imagine trying to navigate your way from say point A to point B. Still, what a treat to have what looks like the work of a youthful couturier shown on these barren shores.

What can you say about Michael Kors other than he's got a death grip on the middling bag market. The clothes just go past. It's a formula that neither excites nor disappoints... Marc Jacobs is in the same vein. The grand gesture of a staggering production does little to explain what we see. It's just a ton of styling with some nice moments. The glittering paillette wrap skirts paired with bits above and over pieces below are great but in the larger scheme it's just show biz.......