The Inaugural: From the Sublime to the Regrettable


Like so many of us who can't resist a good, slo-mo 2 million car pile up, I woke with the birds to turn on the TV to watch the circus come to town. Ringling Bros. may have cashed in last week having dispensed with the elephants, the unicorns and irritating clowns. I would have suggested that for those of you pining for the side show with Bearded Ladies, Pin-Headed children and Reptile boys just head over to Coney Island. If today is any indication we'll need go no further than our TV's to catch a glimpse of the 3-Ringed Side show. 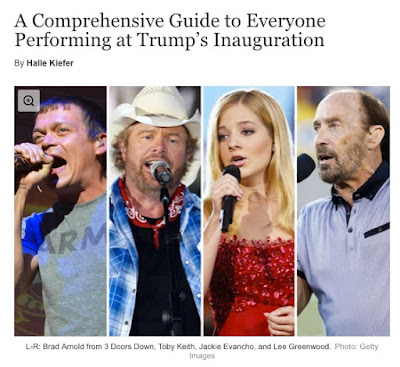 Bits and pieces of the festivities from last night still ring in my ears for their incredible paucity of talent, enthusiasm and just 3rd rate quality. Historically, Inaugurations tend towards the grand with tons of ceremony, pomp and gravity. There were no signs of that last evening. Instead there were a few Country Western acts looking more like lost tourists carrying guitars instead of guide books. Trump looked lost sitting there 'making some noise' of gratitude. To coin one of Trump's phrases, "It was sad, very SAD".

This morning looked much the same only without the fortunate cover of darkness. When my mother attended the Inauguration of Obama, there wasn't a spot on the mall to stand. They came down by bus from Massachusetts and the Mall was beyond jammed with celebrating hordes. Today, the Mall looked like part empty skating rink and part partially full parking lot. The weather wasn't brutally cold and wet like the Inaugural of 2009, yet where was everybody? Side by side images taken of the Mall for Obama's Inaugural next to Trump's shows a Mall that is, well, pretty EMPTY.

The first signs that things were amiss was the appearance of Kellyann Conway in front of the Chapel where the Trump klan went to pray. In red, white and blue Gucci, Ms. Conway gave new meaning to the phrase WTF? I guess Baron Trump's suggestion to wear one of his Ninja Turtle costumes didn't resonate. Still, she should have taken the kid's suggestion. Not to put too fine a point on these things but the press used the excuse that Conway's regrettable choice of outfit cost $3600.00 somehow legitimizing it. Money legitimizes nothing. MONEY EXCUSES NOTHING.

The Obamas and Bidens very graciously welcomed the Trumps to the White House for tea. With the cameras capturing every expression, every gesture, they could not have been more warm or correct. Trump and his wife shook hands and embraced the First couple as they entered. One could see the effort the Obamas made to welcome them to their new home. The Trumps for their part looked tense even frightened, as they should be... Michelle was elegant and appropriate in a subdued burgundy coat and dress. Melania looked fantastic in her pale blue cashmere Ralph Lauren. Glamour she can do. Communicating, expressing an idea, writing or helping to write a speech, taking a position on anything other than where to turn her head, which eye to squint or which is better; leading with her left leg or perhaps with her right, all of that remains to be seen.

Tiffany looked like what I'd expect; not much. An arctic white coat with a bad bleach job and fringed black ankle boots is the perfect recipe for ridicule. Her road in and out of this town is sure to be rutted and treacherous. She should leave now as it's only going to get so much uglier. The wives of the sons, who look more like their stand-in Moms were each an ad for long blond extensions. Dull clothing, dull eyes, and a marked lack of warmth between them all spoke volumes. Donny, Jr. and Eric are just odd to watch. Between their put on seriousness and their tendencies to gloat, brag, lie and all while looking totally lost is just the apple not falling far from the tree. Like Papa, like sons. The slicked back hair is some Bryl-Creme aberration they picked up from Dad or from looking too closely at their Stephen Baldwin posters. Looks like they copy his facial expressions too. So does the President.......

Ivanka, God bless her, tried to hit the ball out of the stadium with her all white confection from our pre-school design team Laura Kim and her sidekick (the one who can't design a gerbil's throw, BUT the one with Mama and Papa's fat bank account keeping their sodden MONSE collection listing in the shallows) from Oscar de la Renta . Their break out moment came on the back of Ivanka Trump in all of its asymmetry and confusion. The only thing clear about the look was that it was white, the same white that Hillary Clinton was wearing. Beyond that, it was no Ivanka Trump branded outfit (even I can't believe I said that)...... Somehow I don't see the women in the audience racing to Saks to pick up the look.

The side of the aisle with all past presidents, Supreme Court Justices, etc had such a downcast look. It was more funereal than celebratory, with the exception of Paul Ryan and Judge Clarence Thomas who looked like he was at someone else's family reunion, you know, the semi-invited guest that no one wants to speak to but nevertheless is just SO HAPPY to be there.

The 'entertainment' featuring not-so-little-anymore Jackie Evancho with her freakish, untrained and unlistenable (faux) operatic voice tentatively sang the National Anthem, going for the big applause with an octave leap on the last note. It was ill advised. She shouldn't have. Her arctic white coat with some stuff glued on the back of it and on the lapels didn't help her patriotic cause. Nothing helped, until I got up, turned off the TV and stood for a very long time in the shower.

Oh, gawd,Fluff, than you for this.