Margaux Hemingway was my Muse 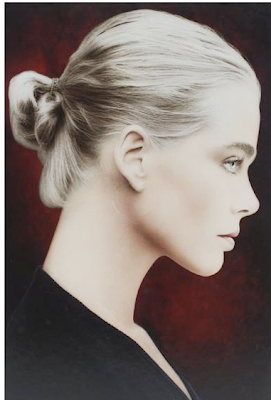 Long ago when I was a kitten , happy in the safety of home and only curious about life I discovered Vogue Magazine. This incarnation of Vogue was very different than what it is now. Diana Vreeland was in the driver's seat and it opened the doors to a world of sophistication, glamour and mystery.
I would curl up on our sofa under the window where the sun would warm my back and spend hours entranced by every page and all it offered up to the senses. Even the typeset and the size of the magazine was enthralling. It was a much magazine in those days. We're talking 1972 or so.

My interest in fashion and fashion magazines were the worlds they conjured. Part of me knew it was artifice , but the other part knew instinctively that artifice and imagination could be the sole ingredients in creating a way of seeing and living....a real world of one's own making. Vogue did that for me, and for that I will be eternally grateful. My disillusionment with what that magazine has become can never take that away from me. I designed my world long before they went to work disassembling it.

The spell that held me wasn't specifically a dress, the cut of a gown or the way a sleeve was set , but more the overall mood that the photographer's eye captured. Fashion was synonymous with a way of looking at the world. It meant a heightened existence, not school uniforms, gym class , Little League or choir rehearsal on thursday nights. Fashion was a place with an address that was mine.
There were lots of fantastic mod 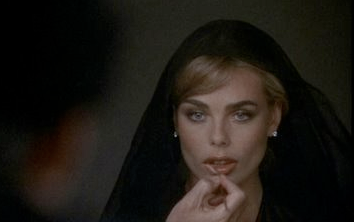 els in fabulous clothes, makeup, and jewels , but it wasn't until I stumbled onto my first issue that had Margaux Hemingway on the cover with a huge spread inside that I became fixated. She would become my definition of and the personification of beauty. From that moment , Fashion had a face and a body and it belonged to Margaux.
This is still years before I considered fashion as a career. Frankly, I didn't understand that it could be one, certainly not one for me. Where I grew up, fashion wasn't even a topic of discussion. Certainly, not a topic for a 12 year old boy. So it was my own precious secret.

When I fantasized about my future, Margaux was my pal. When I thought up wild getaways to Marrakesh or Tahiti, she was my travel mate. I wanted to watch her dress, put on make-up. I wanted to brush her eyebrows....oh God, those heavenly eyebrows. Her beautiful athl 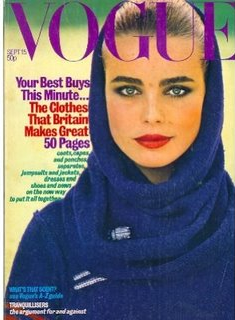 etic body and naturalness that was evident even then to a kid. There was something so real and open that photographers consistently captured. In retrospect, I believe she was incapable of hiding or separating who she was as a person from the glamorous model on the page. It was Margaux completely done, or Margaux the person. It's this quality of realism, even superbly transformed and heightened that sparked my imagination. This is the quality in models who would come later who inspired and haunted me. There is something about my personality and theirs or at least the look of them that touches me. The bizarre and unnatural do nothing for me. Natural beauty complete with flaws excite me.

Margaux had a meteoric rise to fame and then a life with many problems that were never kept private. The press was all over her and helped to shorten a life she struggled to get and keep on course. To this day I feel a loss when my thoughts wander back. The Met exhibit on Models as Muse, makes me think a lot about the different faces that launched a thousand ideas. Her face and beauty alone set me on my path.

Ironically, shortly before she died I had the very unexpected pleasure of making her acquaintance and thanking her for the gift she gave me, the one of which she was wholly unaware. It was pouring rain on a late afternoon and I was walking down Madison Ave. looking in boutique windows. At a red light I found myself standing with my umbrella next to a very tall and soaking wet woman trying to hail a cab. Instinctively, I offered to share my umbrella while she waited for a cab to stop. When she faced me to say thank you and how sweet I was to shield her, I realized 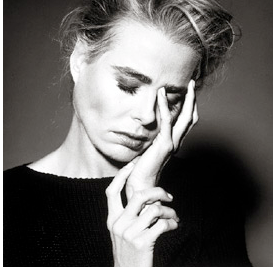 it was her. I was stricken and struck dumb. But , as you don't come face to face with your dream model everyday, I introduced myself and gushed . She seemed so surprised and moved. I wished her well and told her what a fantastic model she was, that she was my muse for many years.When the cab came, I opened the door for her and she gave me a warm embrace and kissed my cheek. As the cab pulled away she lowered the window and waved goodbye.
I continued down the ave. but now with out my umbrella. I gave it to her to keep; a small token of my appreciation. It didn't matter that I was drenched, now. At least the people I passed didn't notice the tears streaming down my face.

Joy or sadness?It's hard to say. They both are so closely aligned.
Posted by Fluff Chance at 3:21 PM

A beautiful article. I came a little later to the fashion/magazine/advertising industry...starting my career in the early 80's. But I completely understand what you mean, the magazines had an aspirational feel to them. It was about a complete lifestyle even though we knew it was a fantasy lifestyle it was still beautiful and you could manage to lose yourself in the world that the magazines created.

Now I look at those same magazines and everything seems crass and one dimensional. The fantasy is gone, the beauty is gone.........the joy is gone.

Really lovely post and a wonderful story about meeting Margaux.

Your point about crassness is well taken. Other than Michelle Obama, I can't think of one actress Vogue cover that is not a blatant shilling of her next film, and never small art films. There is no effort at uncovering and presenting true new talent or even a range of diversity and talent, and there is way too much emphasis on Hollywood. Coincidently, I just read that minorities make up 34% of the U.S. population now, but you would hardly know that from reading Vogue.

I sincerely hope that Anna Wintour's 9th inning effort at publicity is not enough to keep her at Vogue. She's been asleep at the helm, or towing someone else's line for way too long, and it's a bore.

amazing. i was too young to fully remember margaux's impact but i can recall a bit of the buzz that surounded her. i guess my mother must have been interested in her as she as with most models/celebrities. your description of the chance meeting with her on madison ave in the rain is lovely.
until i read this post i felt strongly in the positive about vogue.. now i'm not so sure. maybe i've been duped

wow! i love this story...i had the same passion for vogue magazine in the 70s when i was a kid and i had a massive girl crush on margaux and was reminded of her today (it's mariel's b-day) and have been googling her photos...she was even more fantastic than i remembered