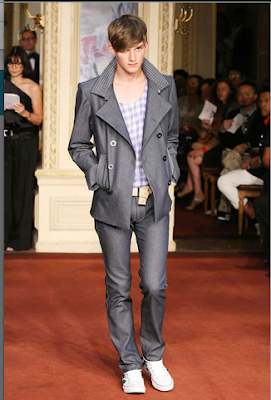 That title came from that fantastic Helen Mirren detective series on the BBC,Prime Suspect. She plays a walking time bomb, a serious alcoholic,with a love life in shambles, a poverty of faith , and her job on some very jagged rocks. In short, she is an English lady cop version of a legion of fashion designers the world over......That said, this was an episode where she sort of fucked up(again) and got transferred to the sticks, a backwater precinct where she proceeds to make yet further mistakes. This season in Milan and Paris , for me, was one of similar errors of judgement.
I don't have the studied eye for menswear , or a truckload of references to base my opinions on like a Cathy Horyn, a Sartorialist or the guys from DNR/WWD who's career is built on menswear criticism. I shoot from the hip and often aim wide. But I do know what I like and am clear as to it's value and relevance, part of the time. I can promise you that I won't cop to a sycophantic butt licking form of non criticism as it serves no one. We all learn from objective opinions and analysis , so here are mine.

Givenchy by Tisci sucked
John Galliano was silly and way too homo- referenced
Dior Homme by Kris von Aasche was pretty cool
Lanvin with Alber Elbaz and Lucas Ossendrijver was forced an ultimately false
Raf Simons looked pretty dead on , I'd shop lift it!
Hermes by Veronique Nichanian was ok , but I only accept equestrian clothing when they come with a horse
RickOwens was Rick Owens, an acquired taste I've yet to acquire. I'm not butch enough for those clothes and neither are most men and sorry but Haute Goth is no longer cool for grown ups OR Tweens
Commes des Garcons was a quilting bee for the absurdly rich. I don't think most men want to wear clothing that Nana made as she was going blind
Kenzo by Antonio Marras was very cool, artless and modern, dressing for your own pleasure and looking like a rock star
Paul Smith is always amusing , uptight Englishness without the uptightness, plenty of humor and exquisite cut, fabrics and detail

To illustrate a bit more my short assessments I will say that Tisci is a lamb lost in the slaughter house. His ideas for men are banal, uninteresting and worst of all irrelevant. All those people who fight for his legitimacy are shameless roadies and toadies to his empire of smoke. I don't buy it and wouldn't accept a gold lame t-shirt from that collection if it were a gift including a gift certificate. Lanvin will not convince me that thinly veiled women's wear for men is modern or outlaw-ish in a good way. The day you catch me in modified harem pants, a "blouse" and closed toe "SLINGBACKS" that are NOT CROCS....take me out back and bludgeon me.Kris von Aasche for Dior has marvelous taste and and imagination to create new ways for us to dress. It was an elegant , cool unfussy collection. His eponymous collection seemed to be the typical reaction to having 2 babies by different fathers. One is the epitome of it's Daddy, the wealthier of the two: picture perfect, always spotless and at ease in his skin , knowing that he's not only loved but secure. The other is more bohemian, deliberately left to be his own little terror with no limits , discipline or any clear example to follow. That is the feeling I got from von Aasche's collection. Trying too hard to differentiate his aesthetic from Dior and doing it a dis justice. Not bad, just unruly. Galliano is under the mistaken impression that we all want to be swashbuckling, desert taming super queers. Baron von Gloedden was a brilliant photographer ofcompromised Sicilian boys . He shot them very erotically and aesthetically. To take that sliver in time and that theme of the forbidden(at least as far as the Edwardian sensibility was concerned) and make it a theme in a collection is like fishing at low tide. Perhaps his friends find these clothes 'ravissant', but I think it's absurd. Wrapped as if bandaged returning from the French foreign legion, with a rest stop in Napoleon's tent, is just a riot of themes that all add up to a negative number. I'm not saying it doesn't make for a good show, but am I going to spend my rent money on it ? NOPE. As for von Gloedden, I'd invest in a photograph of his before spending it on clothes that at a certain point reference an International Male catalogue more than von Gloedden. There were so many images from the Galliano collection that I will give them their own individual post. As far as Hermes is concerned the leathers are sumptuous as are the layers and beautiful color, but lay off the equestrian references. They are beaten to death and hold little or no mystique on the runway. On a horse in training or competition or even for pleasure, I say an emphatic yes. To lend a collection glamor, credibility or worse, effete snobbery, I say NON!
The big surprise from Paris was the collection by Alexis Mabille. It was artistic, clearly thought out, young , but in an inclusive way. There were clothes for the more grown up of us and things decidedly young and very cool. Quality and craftsmanship pours from his hands. Though some pieces were a touch fay, the overall impression was one of a sure hand and a serious mind. That is the photograph I chose for the piece.
Milan will be next, but a little light hearted Galliano to clear the palate , first.
A Bientot!
Posted by Fluff Chance at 9:51 AM

I'm never quite sure what to think about Hermes' slavish devotion to equestrian gear. I love the lines of the horse gear on most any body type, but I can never reconcile wearing it away from the horses. There's something a little tasteless about that, and same for fencing-style clothes, running gear etc. I really can see the appeal of these duds, so maybe I've got irrational hang-ups about it.

Tell me again why Ozwald Boateng was let go from Givenchy?!