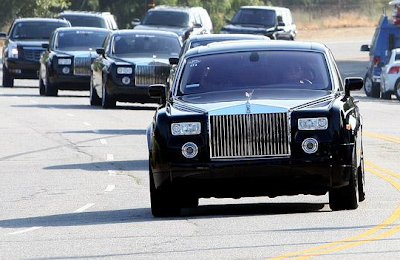 Michael Jackson's Final Farewell tour hits the road today. Millions and millions are watching, witnessing and viewing jumbo-trons here there and everywhere. It is a very sad and sordid ending to what has been an incredible and extremely unusual career. I'm surprised that more hasn't been said in fashion arenas regarding his influence on menswear(similar to Elvis' mammoth influence) the accessories market: sunglasses, novelty gloves, abbreviated socks, black loafers,red leather jackets with epaulets and let's not forget face and nose masks of every sort. Oh.... and also scarves and veils.
The biggest recipient of his largess and endorsement would have to be the Swarovski Company. Michael was the standard bearer for all things Swarovski. His tour clothes for the ill-fated tour which should have kicked off this week was rife with crystal studded outfits . Nadja Swarovski is notably absent from all the proceedings which stymies me and probably scores of others, as well.
I would be very surprised if he weren't interred with a touch of sparkle. I'd go further to say that Michael probably single handedly did the most for that company. Nadja should do the gracious thing and make some sort of statement or issue a statement from the company to the effect that the 'King of Pop' will be missed and acknowledge the contribution he made to Swarovski's popularity. But hindsight tells me that this unfortunate experience isn't considered 'sexy' in her eyes. She's all for the grand gesture but perhaps this one is a bit too down market.
We will all say our good byes today , tomorrow and for the foreseeable future. I would like the fashion industry to talk a bit more about his place in fashion history because he was an icon and a huge influence on many many people outside the radar of the acceptably hip and happening. You won't see 500,000,000 people waiting in line when the King of Polo bids us farewell.......
Posted by Fluff Chance at 12:34 PM

--Absolutely, and to my knowledge, he did not have a long-time, single stylist but collaborated with many in fashion and was very instrumental in forming his own look. At least half my high school class of (all-white) all-girls had red leather jackets with either military details or the shoulder pads and zippers. Also short black tight pants with white socks and black loafers. And I even remember some white sparkly gloves. Unlike the Britney bare belly look of later years, this was fashion that parents didn't have too many problems with either.

I have the Farewell special on TV as I work today, and it's been a surprisingly moving commemoration of his life. Some wonderful personal stories, his great music. Not sure how the family is getting through it, but they have put together a fine memorial.

YAAAAY!!!!...Thank you very much...I'm glad someone in the "fashion community" has come out and said it. I agree totally.

PS. We STILL luv and miss you MJ:(

I did see somewhere a slide show of his various style influences - Rollingstone?
Qui sait...
His sparkly navy Chanelesque jackets were to die for and some of his utterly simple black and white have me fixated now that I look back at the thousand of videos on Youtube.
Thanks for this.

On the same day that MJ died, not only Farrah died, but also several young American soldiers. And IED took their lives. Poor old MJ merely killed himself with too many drugs to help himself sleep. I don't know which is more sad.